The 355th Fighter Squadron is a United States Air Force unit stationed at Naval Air Station Joint Reserve Base Fort Worth, Texas. It is an active-duty associate unit administratively assigned to the 495th Fighter Group and operates aircraft assigned to the Air Force Reserve Command's 301st Fighter Wing. Prior to its reactivation in 2015, the unit's last assignment was that of a subordinate unit of the 354th Fighter Wing based at Eielson Air Force Base in Alaska, flying the Republic A/OA-10 Thunderbolt II aircraft. The squadron was inactivated on 15 August 2007 as a result of Base Realignment and Closure (BRAC) 2005.

Activated on 15 November 1942 at Hamilton Field, California, initially equipped with P-39 Airacobras and assigned to IV Fighter Command for training. Moved to several bases in California and Nevada then to Portland Army Air Base, Oregon in June 1943 and re-equipped with new P-51B Mustangs. Transitioned to the Mustang throughout the summer of 1943 the deployed to the European Theater of Operations (ETO), being assigned to IX Fighter Command in England.

In late 1943, the strategic bombardment campaign over Occupied Europe and Nazi Germany being conducted by VIII Bomber Command was taking heavy losses in aircraft and flight crews as the VIII Fighter Command's P-38 Lightnings and P-47 Thunderbolts lacked the range to escort the heavy B-17 Flying Fortress and B-24 Liberator bombers deep into Germany to attack industrial and military targets. The P-51 had the range to perform the escort duties and the unit's operational control was transferred to Headquarters, Eighth Air Force to perform escort missions. From its base at RAF Boxted, the unit flew long-range strategic escort missions with VIII Bomber Command groups, escorting the heavy bombers to targets such as Frankfurt, Leipzig, Augsburg, and Schweinfurt, engaging Luftwaffe day interceptors frequently, with the P-51s outperforming the German Me-109 and Fw-190 interceptors, causing heavy losses to the Luftwaffe. Remained under operational control of Eighth Air Force until April 1944, when sufficient numbers of P-51D Mustangs and arrived from the United States and were assigned to VIII Fighter Command units for escort duty.

Was relieved from escort duty and was re-equipped with P-47D Thunderbolts, and reassigned to RAF Lashenden on the southern coast of England. Mission was redefined to provide tactical air support for the forthcoming invasion of France, to support the Third, and later Ninth United States Armies. Flew fighter sweeps over Normandy and along the English Channel coast of France and the Low Countries, April–June 1944, then engaged in heavy tactical bombing of enemy military targets as well as roads, railroads and bridges in the Normandy area to support ground forces in the immediate aftermath of D-Day.

Moved to Advanced Landing Grounds in France beginning at the end of June 1944, moving eastwards to combat airfields and liberated French airports supporting Allied Ground forces as the advanced across Northern France. Later, in 1944, the squadron became involved in dive-bombing and strafing missions, striking railroad yards, bridges, troop concentrations, and airfields. Participated in attacks on German forces in Belgium in the aftermath of the Battle of the Bulge, then moved eastward as part of the Western Allied invasion of Germany. The squadron flew its last mission of the war on 7 May 1945 from the captured Luftwaffe airfield at Ansbach (R-45).

Remained in Occupied Germany as part of the United States Air Forces in Europe XII Tactical Air Command occupying force after the German Capitulation, being stationed at AAF Station Herzogenaurach. Was inactivated on 31 March 1946.

Reactivated by Tactical Air Command, United States Air Force on 19 November 1956, being assigned to the reactivated 354th Fighter-Day Group at the new Myrtle Beach Air Force Base, South Carolina. Equipped with North American F-100 Super Sabre fighters, the squadron participated in exercises, operations, tests, and firepower demonstrations conducted by the Tactical Air Command within the US and abroad. The unit frequently deployed to Aviano Air Base, Italy and Wheelus Air Base, Libya. Was deployed to Europe during the 1958 Lebanon crisis and was moved to McCoy AFB, Florida in 1962 during the Cuban Missile Crisis.

At the end of the TDY on 5 July, the 355 TFS was permanently assigned to the 37th, with activated New Jersey and District of Columbia Air National Guard personnel from the 113 TFW at Myrtle Beach replacing them and manning the unit.

At Tuy Hoa, the tail code of the 355th F-100s was changed to "SP", and deployed Air National Guard personnel from New York and New Mexico and regular Air Force personnel manned the 355th until its inactivation on 30 September 1970.

During its time in Vietnam, the 355th flew more than 17,000 combat sorties flying close air support, interdiction, search and rescue, and helicopter support missions. The squadron was awarded the Presidential Unit Citation. the Air Force Outstanding Unit Award, and the Republic of Vietnam Gallantry Cross with Palm for its service.

On 1 November 1970, the 355 TFS was reactivated at Myrtle Beach AFB, SC as part of the 354 TFW. Upon its return, the unit transitioned to the new A-7D Corsair II aircraft before redeploying to Southeast Asia in the fall of 1972 as the first A-7 unit to fight there. In 10 weeks of combat before the end of that conflict, the squadron participated in the Linebacker II campaign, generated more than 4,000 sorties, and was credited with 22 rescues of downed airmen. The unit returned to Myrtle Beach in April 1974. 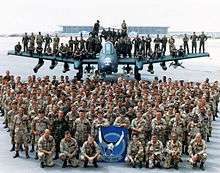 In February 1978, the 355 FS transitioned to the new A-10 Thunderbolt II, a close air support aircraft, becoming the second operational squadron in the nation's first A-10 wing.

Duty called again in August 1990 when the unit deployed to King Fahd International Airport, Saudi Arabia in support of Operations DESERT SHIELD and DESERT STORM. There, the squadron's pilots inflicted heavy damage to Iraqi armor and artillery emplacements, helped cut off enemy supply lines, and conducted search and rescue missions. The squadron contributed greatly to the 4,200 artillery, tank and other vehicle kills credited to A-10s during the war.

With a dual role A/OA-10 squadron commitment and night vision goggles, the squadron had the ability to deploy forward air controllers with attack aircraft for a complete day and night employment capability. 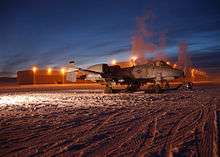 An A-10 Thunderbolt II of the 355th Fighter Squadron sits on the tarmac at Eielson before a mission, 2004

In Spring 2004 the unit deployed to Bagram Air Base, Afghanistan in support of Operation Enduring Freedom. The unit redeployed there again early 2006. During both deployments the unit was responsible to provide close air support to Army ground forces and convoys in Afghanistan.

Base realignment and closure

The last three A-10 aircraft departed Eielson AFB on 15 August 2007. Lt Col Kevin "Crotch" Blanchard flew 81-0944, Capt Sean "Shark" Hall flew 79-0172, and Capt Dale "Porkchop" Stark flew 80-0259. Although the aircraft were originally scheduled to depart at 0700, they were delayed until 0830 because of foggy conditions. Lt Col Blanchard was the first to lift off, followed closely by Capt Hall. When Capt Stark took off, and shortly before disappearing into the clouds, he tipped the wings of his jet, a final farewell salute to Eielson AFB and the 355th Fighter Squadron.

In 2010, Detachment 457, a geographically separated unit (GSU) of the 20th Operations Group, 20th Fighter Wing, Shaw Air Force Base, South Carolina, was stood up at Naval Air Station Joint Reserve Base Fort Worth, Texas. The unit oversaw the integration of over 130 active-duty F-16 Fighting Falcon pilots and maintenance personnel into the Air Force Reserve Command's 301st Fighter Wing under the Total Force Initiative.[3] On March 8, 2013, the 495th Fighter Group was stood up at Shaw as a dedicated unit overseeing ten active associate fighter units, including Detachment 457. On October 5, 2015, Detachment 457 inactivated and was replaced by the 355th Fighter Squadron, which reactivated the same day. It remains under administrative command of the 495th Fighter Group and flies and maintains F-16s assigned to the 301st's 457th Fighter Squadron at Fort Worth.