The adjacent facilities were officially combined by the 2005 Base Closure and Realignment Commission. Its mission is to support and defend U.S. interests in the Asia Pacific region and around the world by providing units who are ready for worldwide air power projection and a base that is capable of meeting PACOM's theater staging and throughput requirements.

Responsible for maximizing theater force readiness for 21,000 Alaskan servicemembers and expediting worldwide contingency force deployments from and through Alaska as directed by the Commander, USPACOM

To support and defend US interests in the Asia-Pacific region and around the world by providing units who are ready for worldwide air power projection and a base that is capable of meeting PACOM's theater staging and throughput requirements.

The Alaskan NORAD Region (ANR) conducts aerospace control within its area of operations and contributes to NORAD's aerospace warning mission. 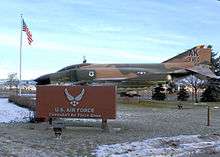 Elmendorf Air Force Base sign outside of Government Hill Gate

The 19th Fighter Squadron's F-15 Eagle flagship takes off for the final time at Elmendorf Air Force Base, Alaska, 13 May 2010

Construction on Elmendorf Field began on 8 June 1940, as a major and permanent military airfield near Anchorage. The first Air Corps personnel arrived on 12 August 1940.

On 12 November 1940, the War Department formally designated what had been popularly referred to as Elmendorf Field as Fort Richardson. The air facilities on the post were named Elmendorf Field in honor of Captain Hugh M. Elmendorf, killed on 13 January 1933, while flight testing the experimental Consolidated Y1P-25, fighter, 32-321, near Wright Field, Ohio.[3][4] After World War II, the Army moved its operations to the new Fort Richardson and the Air Force assumed control of the original Fort Richardson and renamed it Elmendorf Air Force Base.

The first Air Force unit to be assigned to Alaska, the 18th Pursuit Squadron, arrived in February 1941. The 23d Air Base Group was assigned shortly afterward to provide base support. Other Air Force units poured into Alaska as the Japanese threat developed into World War II. The Eleventh Air Force was formed at Elmendorf AFB in early 1942. The field played a vital role as the main air logistics center and staging area during the Aleutian Campaign and later air operations against the Kurile Islands.

Following World War II, Elmendorf assumed an increasing role in the defense of North America as the uncertain wartime relations between the United States and the Soviet Union deteriorated into the Cold War. The Eleventh Air Force was redesignated as the Alaskan Air Command (AAC) on 18 December 1945. The Alaskan Command, established 1 January 1947, also headquartered at Elmendorf, was a unified command under the Joint Chiefs of Staff based on lessons learned during World War II when a lack of unity of command hampered operations to drive the Japanese from the western Aleutian Islands of Attu and Kiska.

The uncertain world situation in late 1940s and early 1950s caused a major buildup of air defense forces in Alaska. The propeller-driven F-51s were replaced with F-80 jets, which in turn were replaced in succession by F-94s, F-89s, and F-102s interceptor aircraft for defense of North America. The Air Force built an extensive aircraft control and warning radar system with sites located throughout Alaska's interior and coastal regions. Additionally, the Air Force of necessity built the White Alice Communications System (with numerous support facilities around the state) to provide reliable communications to these far-flung, isolated, and often rugged locales. The Alaskan NORAD Regional Operations Control Center (ROCC) at Elmendorf served as the nerve center for all air defense operations in Alaska.

The U.S. Air Force Security Service (USAFSS) activated the 6981st Security Group tasked with monitoring, collecting and interpreting signals intelligence of concern to the region, including installation of an AN/FLR-9 antenna array as part of a worldwide network known collectively as "Iron Horse."

The late 1950s, 1960s, and early 1970s brought about a gradual, but significant decline in air defense forces in Alaska due to mission changes and the demands of the Vietnam War. The Air Force inactivated five fighter squadrons and closed five radar sites. In 1961, the Department of Defense consigned Ladd AFB to the Army which renamed it Fort Wainwright. The Alaskan Command was disestablished in 1975. Elmendorf began providing more support to other Air Force commands, particularly Military Airlift Command C-5 and C-141 flights to and from the Far East.

Despite a diminished number of personnel and aircraft, a turning point in Elmendorf's history occurred in 1970 with the arrival of the 43d Tactical Fighter Squadron in June 1970 from MacDill AFB, Florida. The squadron gave AAC an air-to-ground capability which was further enhanced with the activation of the 18th Tactical Fighter Squadron at Elmendorf (also with F-4Es) on 1 October 1977.

The strategic importance of Elmendorf AFB was graphically realized during the spring of 1980 when the 18th Tactical Fighter Squadron deployed eight of its F-4Es to Korea to participate in exercise Team Spirit. It was a historical first and underlined an increasing emphasis AAC placed on its tactical role. The strategic location of Elmendorf AFB and Alaska made it an excellent deployment center, a fact that validated the contention of Billy Mitchell who, in 1935, stated that "Alaska is the most strategic place in the world." Deployments from Elmendorf AFB and Eielson AFB to the Far East are now conducted on a routine basis.

The 1980s witnessed a period of growth and modernization of Elmendorf AFB. During 1982, the 21st Tactical Fighter Wing converted from F-4Es to F-15A/Bs. The 18th Tactical Fighter Squadron was assigned to Eielson AFB where it was equipped with A-10s. The 54th Tactical Fighter Squadron, of Aleutian Campaign fame, activated once again in 1987. Operating two F-15 Squadrons (43rd and 54th TFS), the F-15s were housed next to the 5021st Tactical Operations Squadron's T-33 Shooting Stars. Rounding out the modernization program was the construction of an enhanced Regional Operations Control Center (completed in 1983), and the replacement of the 1950s generation aircraft control and warning radars with the state of the art AN/FPS-117 Minimally Attended Radars. The integrated air warning and defense system became fully operational in mid 1985. Alaska's air defense force was further enhanced with the assignment of two E-3As to Elmendorf AFB in 1986. The Alaskan Command was reestablished at Elmendorf in 1989 as subunified joint service command under the Pacific Command in recognition of Alaska's military importance in the Pacific region.

The Elmendorf AFB is a site of one of the now decommissioned FLR-9 Wullenweber-class antennas, a node of the now obsolete High Frequency SIGINT direction finding system.

That importance was further recognized when the F-15E Strike Eagle equipped 90th Tactical Fighter Squadron was reassigned to Elmendorf Air Force Base from Clark Air Base in the Philippines in May 1991. The Pacific Regional Medical Center moved from Clark to Elmendorf and construction of a new, greatly expanded hospital began in 1993. The early 1990s also saw major organizational changes and an expansion of Elmendorf's importance. In 1991, the 21st Tactical Fighter Wing was reorganized as an objective wing and all the major tenant units on Elmendorf were placed under it. The 21st Wing was inactivated and the 3d Wing was reassigned from Clark Air Base to Elmendorf Air Force Base on 19 December 1991. This was in keeping with the Air Force's polices of retaining the oldest and most illustrious units during a period of major force reductions. It was also an alternative landing site for the Space Shuttle.

The base also contains the headquarters of the Alaska Wing of the Civil Air Patrol.[5]

Base realignment and closure, 2005

On 22 September 1995, a Boeing E-3 Sentry Airborne early warning and control aircraft with 22 USAF personnel and two Canadian air crew members crashed after ingesting a flock of Canada geese, killing all on board.[6][7]

On 28 July 2010, a Boeing C-17 Globemaster III cargo aircraft practicing for an upcoming airshow crashed into a wooded area within the base, killing all four air crew members; three from the Alaska Air National Guard and one from the USAF.[8][9] The cause of the accident has been reported to be pilot error. The pilot performed an aggressive righthand turn and ignored the aircraft's stall warning, continuing the turn until the aircraft stalled due to lack of airspeed. The low altitude of the turn made it impossible for the crew to recover from the stall in time to avoid impacting the ground.[10]

On 16 November 2010, a Lockheed Martin F-22 Raptor took off for a training mission. At approximately 1900 hrs., the base reported that the aircraft was overdue and missing. Air Force rescue teams were reported to be concentrating their search for the missing plane and pilot in Denali National Park. The F-22's crash site was found about 100 miles north of Anchorage near the town of Cantwell, Alaska. The pilot, of the US Air Force's 525th Fighter Squadron, was killed in the crash.[11]

During the years 1967 to 1969 (dates not remembered), there were at least two other incidents at Elmendorf AFB. The first involved a commercial Pan American 707 that landed at Elmendorf AFB instead of Anchorage International Airport because of weather conditions. Even during takeoff attempts on December 26, 1968, this aircraft crew was having trouble as fog kept moving in over the runway, and had a few aborted takeoffs. When they finally got clearance, they forgot to lower their wing flaps and crashed just off the west end of the runway, killing all crew members. Packages of all sorts were scattered all over the ground.

Another incident involved a C-141-A attempting to land during inclement weather, and when it had to abort, it was directed to Anchorage International Airport. In the meantime, weather cleared momentarily over the Air Base, allowing the C-141 to attempt another landing. This happened a second time, but on this go around, had an inflight emergency involving the loss of one engine and hydraulic oil pressure to the landing gear. When this plane finally landed at Elmendorf AFB on its next try, it had pieces of trees sticking out of its port (left hand) wing flaps, pieces of vegetation in the landing gear and evidence that foreign objects went through the outboard engine. The crew all landed safely, but it was clear that the plane came within only a few feet of impacting a nearby mountain.[12]