The National City Bank Building at 55 Wall Street between William and Hanover Streets in the Financial District of downtown Manhattan, New York City, was built in 1836-41 as the Merchants' Exchange, replacing the previous exchange, which had opened in 1827 and burned down in the Great Fire of New York in 1835.[5][6] The new building was designed by Isaiah Rogers in the Greek Revival style. The United States Custom House moved into the building in 1862 – with the conversion of the building overseen by William A. Potter – and occupied it until 1907, when it moved to the Alexander Hamilton U.S. Custom House at 1 Bowling Green.[1]

After the Custom House left, James Stillman, president of National City Bank (predecessor bank of Citibank), arranged for his company to buy the building from the government to be their headquarters.[7] Charles Follen McKim[2] of McKim, Mead & White was engaged to enlarge the building, including removing the dome, adding four floors and a second colonnade and gutting the interior, the main floor of which McKim redesigned with William S. Richardson (1907-1910). The old main banking hall has been used as a ballroom and event space since 1998, and the remainder of the building is now condominium apartments.[1][5]

55 Wall Street became the new home of National City Bank on December 19, 1908 when the bank moved across the street from 52 Wall Street. Stillman ordered that the building's Ionic colonnade be preserved and that the interior be remodeled to look like the Pantheon in Rome.[8]

55 Wall Street served as Citibank's global headquarters from 1908 to 1961, when it moved to the newly completed 399 Park Avenue, one of the earlier migrations by Wall Street commercial and investment banks from downtown to midtown Manhattan.[9] Years after the headquarters move, 55 Wall Street continued as a full service retail branch (still carrying the moniker Branch # 001), as well as a substantial location for private banking operations. The building served as the headquarters for the law firm of Shearman & Sterling, lead counsel for Citibank and the Rockefeller family for decades.[10] The building was sold by Citibank in 1990 to private investors for $69 million.[11] Citibank ended its branch banking presence at 55 Wall Street in 1992.[12] It is currently owned by Cipriani.

The original building was designed by Boston architect Isaiah Rogers in the Greek Revival style and built in 1836-1842. The facade of the original four-story, Greek revival style featured twelve massive Ionic columns, each a single block of Quincy Granite.

In 1899, National City Bank, which subsequently became Citibank, commissioned architect Charles McKim of McKim, Mead & White to remodel the building for use as their headquarters. The architects added four stories to the building and superimposed a second colonnade of Corinthian columns above the original facade. They also redesigned the interior into an immense banking hall (at the time constituting the largest bank branch in the world measuring 188 feet in length and 124 feet in width, known as the Great Hall),[14] featuring a sixty-foot-high central dome and offices at each corner. Monumental Corinthian columns support an elegant entablature that circles the space. The room features elegant gray marble floors and walls, a coffered ceiling, and delicate mezzanine railings. 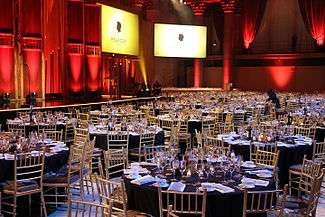 According to Forbes magazine back in 1917, the branch at 55 Wall Street "does more business in its head office than is done under any other nongovernmental banking roof on the face of the earth." [15]

In 1998 it was completely rebuilt as The Regent Wall Street Hotel. After the September 11 attacks on the World Trade Center in 2001, 55 Wall Street served as a relief center for workers and area residents. The hotel closed in 2003 due to lack of business after the 9/11 attacks. It has recently been renovated again and was converted to condos by the Cipriani S.A. empire of restaurants and ballrooms. The main banking hall "now serves as one of the most elegant ballrooms in the world",[17] and has been called a "facility unequaled in America"[18]

A curious remnant of the building's days as a customs house were the jail cells used to detain smugglers and spies.[19] Also when National City Bank was doing renovations in 1908 it uncovered a cannonball embedded in a wall as well as keg of gunpowder and over 100 rudimentary bombs, believed to be armaments for Customs House employees during the New York City draft riots of 1863.[14]

The Designated Landmark of New York City plaque was installed by the New York Landmarks Preservation Foundation in 2002.