For the town of the same name, see Aabenraa. 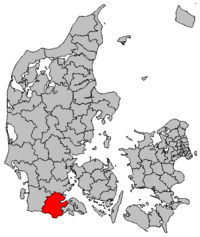 Aabenraa Municipality is a municipality in the Region of Southern Denmark (Danish: Syddanmark) in southwestern Denmark.[1] The municipality has an area of 940.7 km² and a total population of 59,051 (2016).[2] Its largest town and the site of its municipal council is the city of Aabenraa.[3] The mayor of the municipality is Thomas Andresen, representing the Left party.[4]

The island of Barsø is located in the northeast corner of the municipality in the Little Belt. Major communities include Lundsbjerg near the capital, Aabenraa; Sogard to the south, Felsted to the east, and Løjt Kirkeby to the north.[5] Løjt Kirkeby is connected by ferry service from the island of Barsø.[6][7]

A relatively great part of the German minority in Denmark lives in Aabenraa, where their German-language daily Der Nordschleswiger is published.

From 1864 to 1920, the region was part of Prussia, in the Province of Schleswig-Holstein, and as such part of the North German Confederation and, from 1871 onwards, part of the German Empire. It was formerly the seat of, respectively the German Kreis Apenrade and the Danish Aabenraa County.

The 1970-2006 Aabenraa municipality was bordered by the municipality of Lundtoft to the south and east, and Rødekro and Tinglev to the west. As it was partially located on a peninsula, it was surrounded by water on three sides: at the southern side of the peninsula by Aabenraa Fjord opening up to the Little Belt east of the peninsula; at the northern side by Genner Bay (Genner Bugt). in South Jutland County on the east coast of the Jutland peninsula in south Denmark. The municipality, including the island of Barsø, covered an area of 129 km² with a total population of 22,132 (2005). Its last mayor was Poul Thomsen, a member of the Venstre (Liberal Party) political party.

A new Aabenraa municipality was formed on 1 January 2007 as the result of Kommunalreformen ("The Municipal Reform" of 2007) where the former municipality merged with Bov, Lundtoft, Rødekro, and Tinglev.

Distribution of the 31 seats in the municipal council.