Ahir/Aheer (Hindi अहीर) is an Indian ethnic group, some members of which identify as being of the Yadav community because they consider the two terms to be synonymous.[4] Alternative spellings includehe Aheer, Heer, Abhir, Ahirana, Abhira. The Ahirs are variously described as a caste, a clan, a community, a race and a tribe. They ruled over different parts of India and Nepal.[5]

The traditional occupation of Ahirs is cow-herding and agriculture. They are found throughout India but are particularly concentrated in the northern areas. They are known by numerous other names, including Gaoli,[6] Ghosi in the north[7] and Gaddi if converted to Islam. Some in the Bundelkhand region of Uttar Pradesh are known as Dauwa.[8]

Gaṅga Ram Garg considers the Ahir to be a tribe descended from the ancient Abhira community, whose precise location in India is the subject of various theories based mostly on interpretations of old texts such as the Mahabharata and the writings of Ptolemy. He believes the word Ahir to be the Prakrit form of the Sanskrit word, Abhira, and he notes that the present term in the Bengali and Marathi languages is Abhir.[4]

Garg distinguishes a Brahmin community who use the Abhira name and are found in the present-day states of Maharashtra and Gujarat. That usage, he says, is because that division of Brahmins were priests to the Abhira tribe.[4]

Theories regarding the origins of the ancient Abhira — the putative ancestors of the Ahirs — are varied for the same reasons as are the theories regarding their location; that is, there is a reliance on interpretation of linguistic and factual analysis of old texts that are known to be unreliable and ambiguous.[9] S. D. S. Yadava describes how this situation impacts on theories of origin for the modern Ahir community because

Their origin is shrouded in mystery and is immersed in controversy, with many theories, most of which link the Ahirs to a people known to the ancients as the Abhiras.[10]

Some, such as A. P. Karmakar, consider the Abhira to be a Proto-Dravidian tribe who migrated to India and point to the Puranas as evidence. Others, such as Sunil Kumar Bhattacharya, dismiss this theory as anachronistic and say that the Abhira are recorded as being in India in the 1st-century CE work, the Periplus of the Erythraean Sea. Bhattacharya considers the Abhira of old to be a race rather than a tribe.[9]

Whether they were a race or a tribe, nomadic in tendency or displaced or part of a conquering wave, with origins in Indo-Scythia or Central Asia, Aryan or Dravidian — there is no academic consensus, and much in the differences of opinion relate to fundamental aspects of historiography, such as controversies regarding dating the writing of the Mahabharata and acceptance or otherwise of the Aryan invasion theory.[10] Similarly, there is no certainty regarding the occupational status of the Abhira, with ancient texts sometimes referring to them as pastoral and cowherders but at other times as robber tribes.[11]

Some princely states were ruled by Ahir dynasties, notably

The British rulers of India classified the Ahirs as an "agricultural tribe" in the 1920s, which was at that time synonymous with being a "martial race".[12] They had been recruited into the army from 1898.[13] In that year, the British raised four Ahir companies, two of which were in the 95th Russell's Infantry.[14] The involvement of a company of Ahirs from 13 Kumaon Regiment in a last stand at Rezang La in 1962 during the Sino-Indian War has been celebrated by Indian Army & Govt. and in remembrance of their bravery the war point memorial has been named as Ahir Dham.[15][16]

The Ahirs have been one of the brave Hindu groups, including in the modern era. For example, in 1930, about 200 Ahirs marched towards the shrine of Trilochan and performed puja in response to Islamic tanzeem processions.[17]

Traditionally Ahirs are divided into subdivisions such as Yaduvanshi, Nandvanshi and Goalvanshi.[18] They have more than 20 sub-castes.[19]

For centuries the Ahirs were eclipsed as a political power in Haryana until the time of the Pratihara dynasty. In time, they became independent rulers of southwest Haryana. They are majority in the region around Behror, Alwar, Rewari, Narnaul, Mahendragarh, Gurgaon[20] and Jhajjar[21][22] which is therefore known as Ahirwal or the abode of Ahirs.[23] 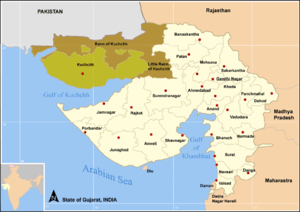 There are five main castes of Ahirs in Kutch: Pancholi, Paratharia, Machhoya, Boricha, and Sorathia and Vagadia. These communities are mainly of farmers who once sold milk and ghee but who now have diversified their businesses because of the irregularity of rain. The other community is the Bharwads, some of whom in Saurashtra use Ahir as a surname and consider themselves to be Nandvanshi Ahirs.[28]

Ahirs or Aheer clans are assosiated with Rajput clans, according to genealogical table it came under Chandarvanshi Aryans. Ahir Clan also founds in Brahmana Caste. According to historian Romila Thapar there are examples in ancient Sanskrit literature of Abhira Brahmana.

Yadhu was the eldest son of Yayati ). It is written in the Vishnu Puran that he did not inherit his father's throne. He, therefore, retired towards Punjab and Iran. He had five sons out of whom Except Satjit and Krishna, three remained childless. Language

The Ahir in Punjab speak Jhangochi and Seraiki, while those in Sindh speak Sindhi. [edit] Location

The most influential are the aheers of the Khusab district.Their main villages in Khushab are Aheerpur and Rakh Baghoor. Migrated from East Punjab of India in 17th century and settled in District Khushab.

"Malik Sher Bahadur Aheer "was DSP of Punjab in 1890 and was appointed Honourary Magistrate in 1903 in East Punjab of India.

Ahir tribe is basically associated with agriculture. Mr. "Naseem Ahmed Aheer" was Minister for Interior in 1986. Most of the land in Jauharabad, District Khushab belongs to Aheer family. Hence this family is the dominant agriculturist family in the region.

The Haral or Harral {अहीर हरल} are a Ahir clan found predominantly in Pakistan. Harals are in very large numbers in Jhang, Sargodha, Faisalabad, Shahkot, Jaranwala and in small numbers in some villages of Tehsil Pind Dadan Khan of Jhelum District and other central Punjab districts. Some of the prominent villages of Harals in Jhang District are Sarwala, Muradwala and Bhaderiwala. Also a large number of Harals are living in Chak No.50/RB Umerpur Tawana Tehsil Shahkot and Chak No.534/GB Chakku Tehsil Jaranwala.

Haral, Kharal and Marral were the sons of Rai Bhopa who came to Uch sharif and converted to Islam along with his sons. Harals of Matila which is a famous village of Sargodha. They are settled along the banks of Chenab, they have lands near river Jehlum and bisecting Motorway 2 at UC.21 Chabba Purana Phullarwan & Deowal , Tehsil Bhalwal. From Chenab to Matila and Kotmomin, which is area of 100 km. They produce best citrus all over the world from their lands . Moreover, ALLAM KHAN HARRAL, settled on chak no 383 W/B in lodhran district and his son KHUDA BAKHSH HARRAL, who is a renowned businessman took initiative to gather all harrals on one plateform "Harral Welfare Society". The famous politician of this area is Haji Mahar Ahmed Khan Haral , who became MPA of this area consecutively 3 times from 1990 to 1999. He is also well settled Zamindar of the area. The Haral baradri (also pronounced with prefix of 'Mahar' in Sargodha. In India harals have their own province and are called Rai sahib. Harrals of Sargodha and Faisalabad districts took part in the Indian Rebellion of 1857 against the British rule. In the District gazetteer of Jhang they have been included as a sub-tribe of the "Ahirs".

Few of the Harals live in Chiniot, District Jhang . In 1931 census, conducted during British rule, the male population was recorded as 5,000 - the tribe was found in the Sahiwal District, Jhang and the now defunct Shahpur districts. Harrals are also in Mangoana, moza saee kay, and in moza sahmal, and also chak no. 148 j/b and in Koat Haider shah sikhan harlan. Harrals also live in Mauza yakey ke and yaare ke it both village near by each other and have major population and settle on the bank of river chenab. In district Faisalabad Harals are dominant in Muloani Harallan, Lakarwala, Mudoana Harallan and Khanuana Harallan. Mahar Muhammad Ali Haral (Late) of Muloani Harallan was the first ever MPA (Elected in 1970 from Chak Jhumra) and nominated provincial minister (But died due to cancer before taking oath in 1973) from haral tribe. His younger brother Mahar Munir Ali Haral (late) also remained MPA from 1973 to 1977.In Jhang district haral's are residing in chund and Masu wala (Rasul Pur) sargodha road. Some of the Haral family members came in Chak No.50/RB Umerpur Tawana near Shahkot in Distt Nankana Sahib. This Chak was the Jageer of Umer Hayat & Khizar Hayat Tawana. Harals are also living in Chakku Chak No.534/GB Jaranwala Distt Faisalabad. Few families of Harral tribe possibly migrated from District Okara and Sahiwal about 200 years back are residing in villages Wagh, Kotal Kund, Bhallu Wala, Bajwala, Khalaspur, Nakka Kalan and Nakka Khurd, etc. of District Jhelum. Basically Harals are farmers but nowadays due to poverty and shortage of farming land, Harals are almost in every field like business, military, civil services and rural handi-crafts, etc. Harals are very loyal to their country as well as Nation.

Harals are considered to be a very brave clan who also took part in the resistance against the British. Many Harrals are serving as commissioned officers in Pakistan Army as well as civil, judicial, financial and technical services in Pakistan. Getting children educated is now the priority of most of the tribal Harrals, who still desist marriages of their daughters outside their clan, Lassi is their favorite drink. The Harrals of Haralanwali are predecessors of a great saint Hazrat Barkhuddaar Noshahi Qadri Harral.

The Ghosi (Urdu: غوثی, Hindi: ग़ोसी) are a Muslim community found mainly in North India. The meaning of Ghosi (Sanskrit ghosa, root ghush) is "to shout" as he herds his cattle. They are associated with the occupation cattle rearing and the selling of milk.According to famous British historians H.A. Rose, Ibbetson, Maclagan Ghosi 's are none other than Hindu Ahirs converted to Islam. Also Crook remarks that most of the Ghosi's are Ahirs who were converted to Islam and are said to rank below ordinary Ahirs. Edward Albert Gait stats that Ghosi and Gaddi are branches of Mohammadan Ahirs are chiefly occupied in pasturing cattle. A small number of Ghosi are also found in the Punjab province of Pakistan. [29] [30] [31]

The anthropologist Kumar Suresh Singh noted that the Rajasthani Ahir are non-vegetarian, though cooking their vegetarian and non-vegetarian foods on separate hearths. Though they eat mutton, chicken, and fish, they do not eat beef or pork. Their staple is wheat, they eat millet in the winters, and rice on festive occasions. They drink alcohol, smoke biri and cigarettes, and chew betel.[32] In Maharashtra, however, Singh states that the Ahir there are largely vegetarian, also eating wheat as a staple along with pulses and tubers, and eschewed liquor.[33] Noor Mohammad noted in Uttar Pradesh that most Ahirs there were vegetarian, with some exceptions who engaged in fishing and raising poultry.[34] In Gujarat, Rash Bihari Lal states that the Ahirs were largely vegetarian, ate Bajra and Jowar wheat with occasional rice, and that few drank alcohol, some smoked bidi, and some of the older generation smoked hookahs.[35]

The oral epic of Veer Lorik, a mythical Ahir hero, had been sung by folk singers in North India for generations. Mulla Daud, a Sufi Muslim retold the romantic story in writing in the 14th century.[36] Other Ahir folk traditions include those related to Kajri and Biraha.[37]