Kathiawar (Gujarati: કાઠીયાવાડ [kaʈʰijaʋaɽ]; also written Kathiawad or Kattywar) is a peninsula in western India and part of the Saurashtra region. Its coastline borders the Gulf of Kutch to the west, the Arabian Sea to the south and the Gulf of Khambhat to the southeast and east. Jigat Point is located at its western apex and Diu Head at its southern. 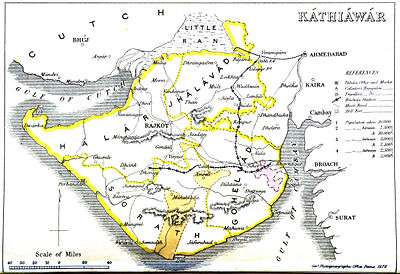 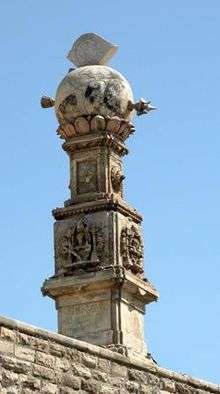 Arrow Pillar or Baan-Stambh at Somnath 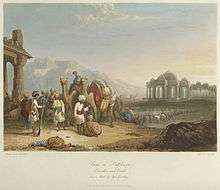 Scene in Kattiawar, Travellers and Escort, 1830. 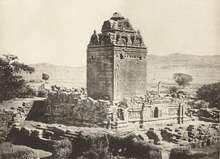 The peninsula derives its name from the prominence of the Kathi darbar community, which was widespread in the region and dominated central Saurashtra in particular for some centuries. Although the Kathis are believed to have migrated to the area as late as the 16th century, they have played an important part in the documented history of the region. During the reign of India Pratihar ruler Mihir Bhoj, the Gurjar empire stetched from Kathiawad to the Bay of Bengal.[1] A Haddola inscription confirms that Gurjar Pratihars continued to rule in this region during the reign of Mahipala I too.[2] The peninsula is dotted with antiquities and has a continuous history from prehistoric times to the early periods of the Mahabharata through the Indus civilisation. It was influenced by Kathi people in particular between the 16th century to the mid 20th century and therefore the emergent name of Kathiawar became a favourite alternative to the region of Saurashtra.

In a geopolitical context, the area of Kathiawar forms the core of Saurashtra. In feudal times, there were certain principle divisions of Saurashtra falling under princely states, namely Kathiawad, Sorath, Gohilwad, Halar, Panchal & Zalawad, Nagher, Okha Mandal, etc. However, the main area of Kathiawar covered 10 districts as Rajkot, Bhavnagar, Jamnagar, Surendranagar, Porbandar, Amreli, Junagadh, Botad, Morvi, Gir-somnath. Some historians suggest that the Kathi people are basically Scythians who migrated to Saurashtra (referred to as Saraostus as well, by contemporary Greeks) around the second century BC.

For a long period, the name Sorath remained limited to the region when the Chudasama Rajput (Raa' dynasty) ruled from 875 to 1473. Concurrently, major Rajput clans that held a sway over this region included the Walas ( Kathis ), Jethwas, Raijadas, Chudasamas, Gohils, Parmars, Jhalas, Jadejas, Chavdas, Solankis, Patgirs or Pargirs, Upadhyayas, Sarvaiyas, Savjis. Most of the princely states of Kathiawar were brought under the British protectorate by 1820, but from Kathiawad first traty with the British was made by Vira Wala (Kathi Ruler) of Jetpur with Colonel Walker at Baroda on 26 October 1803.

Before Indian independence in 1947, most of Kathiawar was divided into numerous princely states, ruled by local potentates who acknowledged British suzerainty in return for local sovereignty. These states comprised the Kathiawar Agency. The rest of the peninsula, chiefly in the east along the Gulf of Cambay, were districts ruled directly by the British as part of British India's Bombay Presidency, which included part of the peninsula.

After Indian independence, the states of Kathiawar acceded to India. In 1947, Junagadh's Muslim ruler desired to accede his territory to Pakistan, but the predominantly Hindu population rebelled, and while the prince fled to Pakistan, a plebiscite was conducted, as a result of which the kingdom was merged into the Indian Union. The former princely states of Kathiawar were grouped into the new province of Saurashtra, which became a state in 1950. In 1956, Saurashtra was merged into Bombay State, and in 1960, Bombay state was divided along linguistic lines into the new states of Gujarat and Maharashtra. Diu remained in Portuguese hands until 1961, when it was occupied by Indian troops, then became integrated into India as part of the union territory of Goa, Daman and Diu in 1962. 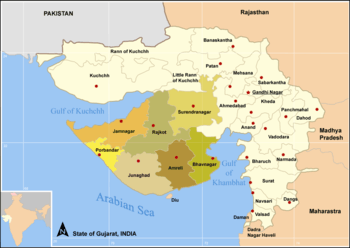 Presents Districts of old Kathiawar, Gujarat. (Note: Diu is not politically a part of Gujarat, currently it belongs to the Union Territory of Daman & Diu.)

The major cities of Kathiawar are Rajkot in the center of the peninsula, Jamnagar on the Gulf of Kutch, Bhavnagar on the Gulf of Khambhat, Surendranagar and the historic city Wadhwan in the central portion of Gujarat, Porbandar on the west coast, historic city of Junagadh on the South. Diu, an island town formerly part of Portuguese India and now part of the Indian union territory of Daman and Diu, lies off the south coast of Kathiawar. The city of Somnath and its famous temple are also located on the south coast.

The natural vegetation on most of the peninsula is xeric scrub, part of the Northwestern thorn scrub forests ecoregion. A range of low hills, known as the Gir Hills, occupies the south-central portion of the peninsula. The highest of these is Girnar. The hills are home to an enclave of tropical dry broadleaf forest, part of the Kathiawar-Gir dry deciduous forests ecoregion. Gir National Park, which includes the forested hills around Girnar, is home to the last remaining Asiatic lions left in the wild. Other national parks on Kathiawar are Blackbuck National Park (Velavadar) on the Gulf of Cambay and Marine National Park, on the Gulf of Kutch near Jamnagar. 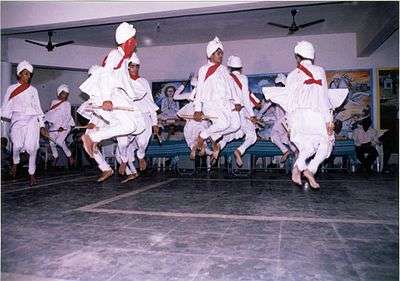 Kathiawar or Saurashtra hosts a large number of communities, castes and settlements in the region, though the Kathis after whom the name of Kathiawar became popular is a distinct group.The Kathi states like Bilkha,Jetpur,Jasdan ,Thanadevli-Amarnagar, Hadala ,Chuda,Vadia etc. Often in everyday conversation, a person from Kathiawar is called a "Kathiawadi". 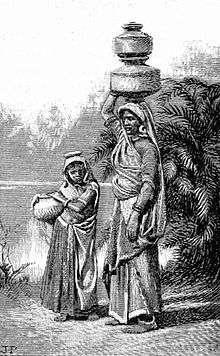 The list of some divine, notable figures, characters and events related to Kathiawar-Saurashtra can be very exhaustive. Covering different sections, fields and class of society, a few of them are as following: