For the American equivalent, see aircrew badge.
For other uses, see Brevet.

In the RAF, aircrew 'wings' are awarded upon the completion of a significant stage of flying training. Aircrew first undertake Elementary Flying Training, and are then streamed to either fast jet, helicopter or multi-engine pipelines. The award of wings usually occurs upon completion of the secondary phase of training; for example, in the fast jet stream, wings are awarded upon completion of the Basic Fast Jet Course (BJFT), currently at RAF Linton-on-Ouse; for helicopter pilots, wings are awarded after they complete helicopter training at RAF Shawbury pre-OCU, and for multi-engine aircrew, wings are awarded upon completion of their Multi-Engine Advanced Flying Training (MEAFT) training at RAF Cranwell. Aircrew therefore are posted to their Operational Conversion Units having gained their wings, but they still have a good deal of training and type familiarisation to complete before they are considered operational or front-line aircrew. 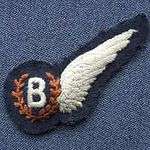 An obselete bomb aimer's brevet; however, current brevets are in the same style with different letters denoting speciality

Pilots wear the letters "RAF" in a brown wreath, surmounted by a crown, with a swift's wing on each side. UAV pilots have similar wings except with a light blue wreath. From April 2003, weapons systems officers/operators are awarded a similar brevet with a single wing. Other aircrew wear a letter or letters (denoting speciality) in a wreath, with a single wing. The only other brevets currently worn are "E" (air engineer), "AT" (airborne technician), "IA" (imagery analyst) and "FC" (fighter controller). Parachute Jumping Instructors (PJIs) wear an open parachute instead of a letter. "AS" (air steward) was replaced with a brevet with "CC" (cabin crew); this brevet is unusual for aircrew as it is worn on the right sleeve in the same location as parachute qualification, has two up turned wings (similar to Royal Navy ratings' aircrewman badges) and has cream stitching for the wings, lettering and laurels (other brevets have bronze or blue laurels).

Brevets prior to 2003 (when roles became represented by the single WSO brevet) include "N" (navigator), "LM" (air loadmaster), "AE" (air electronics operator), "B" (bomb aimer), "AG" (air gunner), "AS" (air steward) (replaced by "Cabin Crew"), "M" (meteorological observer), "QM" (air quartermaster), "S" (air signaller), and "RO" (radio observer). Observers wore a single wing attached directly to the letter "O". Some of these now obsolete brevets can still be worn (LM, E, S, AS and AE) by serving aircrew however, provided it was the brevet with which they were initially awarded, with the exception of the Observer's brevet which was replaced by the Navigator's brevet in 1942. AG and B have also been obsolete for several decades, where as M and QM were phased out in the 1970s or 1980s.

The Royal Navy's Fleet Air Arm has its own wings design, featuring albatross wings instead of the wings of a swift, as per the RAF design. The Fleet Air Arm wings badges feature albatross wings, a crown and anchor, reflecting the naval aspect of the flying undertaken. They are worn on the sleeve of naval aviators, above the rank "rings" as opposed to on the left breast of RAF uniforms. Unlike the RAF and the Army Air Corps, Naval aircrew are awarded their wings after OCU, whereupon they are posted to a frontline squadron, the majority of their flying training complete. Therefore, while a Navy and RAF aircrew might take a similar amount of time to reach an operational squadron, the Naval officer has to wait until he has completed his conversion training to receive his wings.

Naval Observers are awarded their own aircrew brevet, consisting of shorter wings either side of a fouled anchor surmounted by a Crown, upon completion of their Observer training at 750 NAS at RNAS Culdrose. Naval Aircrewmen are awarded a brevet similar in shape to the 'Cabin Crew' brevet of the RAF, with upturned wings and a similar Anchor & Crown design to Observers. These badges are also worn on the sleeve of the Number 1 dress uniform jacket, above any rank insignia.

The Army Air Corps pilot wings are awarded upon completion of the basic helicopter course at RAF Shawbury and a subsequent Army course at Middle Wallop Airfield. Aircrew are then dispatched to their OCU to receive type training on either the Apache attack helicopter or the Wildcat battlefield support helicopter. A small number of Army aircrew are streamed fixed wing to fly the Army's Islander/Defender reconnaissance aircraft, or to become instructors at the Defence Elementary Flying School on the Tutor training aircraft.

The Army is unique in the British military in that both Officers and Non-Commissioned Officers can become aircrew and aircraft commanders. The wings are identical for both Officers and Other Ranks, and are worn on the left chest above any medals, similar to the RAF.

It should be noted that in all the services, award of wings does not confer any operational capability - this is declared by an front-line squadron once the student has reached satisfactory standard to allow them to be deployed operationally. This milestone, or'Combat Ready Status', is the threshold necessary for the award of Flying Pay, a discretionary additional salary bonus for aircrew due to the nature of their work.

Royal Australian Air Force brevets differ from those in the RAF mainly in having a crown on all brevets (not just on pilot's wings) and in normally having blue wreaths. The pilot's brevet has the letters "RAAF". A similar twin-wing brevet, bearing the Southern Cross, was introduced for officer aircrew in 1998, replacing various single-wing brevets previously worn by commissioned officers;[1] however NCO aircrew continue to wear the old single-wing brevets.

Most RAAF pilots signed a petition in 1998/1999 in protest of non-pilot "officer aircrew" receiving a double wing. For the most part this was supported by serving navigators and war veterans who had previously held the soon to be abolished 'half' wing. The petition ultimately had over 10,000 signatures, but in the end the petition was unsuccessful.[2]

New Zealand uses similar insignia to the United Kingdom, except the pilot's wings bear the letters "NZ" instead of "RAF" and the single wing of other aircrew still have the letters of the trade they represent. Currently these are air warfare officer and specialist (AW), air engineer (E), air loadmaster (LM), helicopter loadmaster (HL), flight steward (FS), air ordnanceman (AO), and parachute jump instructor (a parachute). Air electronics operator (AE) and Helicopter crewman (HC) is obsolete.