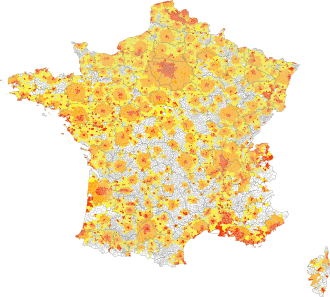 Map of France indicating its commune municipalities. The colours show the urban organisation status of each municipality in 2010 :

An aire urbaine (literal and official translation: "urban area"[1]) is an INSEE (France's national statistics bureau) statistical concept describing a core of urban development and the extent of its commuter activity. When applied to larger agglomerations, this unit becomes similar to a U.S. metropolitan area, and the INSEE sometimes uses the term aire métropolitaine[2] to refer to France's larger aires urbaines.

The aire urbaine is based on France's nationwide map of interlocking administrative commune municipalities: when a commune has over 2000 inhabitants and contains a centre of dense construction (buildings spaced no more than 200 metres apart), it is combined with other adjoining communes fulfilling the same criteria to become a single unité urbaine ("urban unit"[3]); if an urban unit offers over 10,000 jobs and its economical development is enough to draw more than 40% of the population of a nearby municipalities (and other municipalities drawn to these in the same way) as commuters, it becomes a pôle urbain ("urban cluster"[4]) and the "commuter municipalities" become its couronne ("rim"[5]), but this only on the condition that the urban unit itself is not part of another urban cluster's rim. The aire urbaine is an urban cluster and its rim combined, or a statistical area describing a central urban core and its economic influence on surrounding municipalities.

If an urban unit offers 5,000~10,000 jobs (thus becoming an 'average' urban cluster) yet manages to draw commuters numbering more than 40% of the population of nearby municipalities (and other municipalities drawn to these in the same way), the whole qualifies as an 'average' aire urbaine; a 'small' aire urbaine fulfils the same commuter criteria but is centred on an urban unit (or 'small' urban cluster) offering 1,500~5,000 jobs.[6]

Between 2006 and 2011, Toulouse, Rennes, Montpellier, Nantes, Bordeaux and Lyon had the fastest-growing metropolitan areas in France..