For other places named Montpellier or Montpelier, see Montpelier.

Montpellier (French pronunciation: ​[mɔ̃.pə.lje, mɔ̃.pe.lje];[1] Occitan: Montpelhièr [mum.peˈʎɛ]) is a city in southern France. It is the capital of the Hérault department. Montpellier is the 8th largest city of France, and is also the fastest growing city in the country over the past 25 years. Nearly one third of the population is students from 3 universities and 3 higher education institutions that are outside the university framework in the city.[2][3] Located on the south coast of France on the Mediterranean Sea, it is the third-largest French city on the Mediterranean coast after Marseille and Nice. 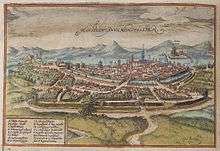 Montpellier in the 16th century

In the Early Middle Ages, the nearby episcopal town of Maguelone was the major settlement in the area, but raids by pirates encouraged settlement a little further inland. Montpellier, first mentioned in a document of 985, was founded under a local feudal dynasty, the Guilhem, who combined two hamlets and built a castle and walls around the united settlement. The two surviving towers of the city walls, the Tour des Pins and the Tour de la Babotte, were built later, around the year 1200. Montpellier came to prominence in the 12th century—as a trading centre, with trading links across the Mediterranean world, and a rich Jewish cultural life that flourished within traditions of tolerance of Muslims, Jews and Cathars—and later of its Protestants. William VIII of Montpellier gave freedom for all to teach medicine in Montpellier in 1180. The city's faculties of law and medicine were established in 1220 by Cardinal Conrad of Urach, legate of Pope Honorius III; the medicine faculty has, over the centuries, been one of the major centres for the teaching of medicine in Europe. This era marked the high point of Montpellier's prominence. The city became a possession of the Kings of Aragon in 1204 by the marriage of Peter II of Aragon with Marie of Montpellier, who was given the city and its dependencies as part of her dowry. Montpellier gained a charter in 1204 when Peter and Marie confirmed the city's traditional freedoms and granted the city the right to choose twelve governing consuls annually. Under the Kings of Aragon, Montpellier became a very important city, a major economic centre and the primary centre for the spice trade in the Kingdom of France. It was the second or third most important city of France at that time, with some 40,000 inhabitants before the Black Death. Montpellier remained a possession of the crown of Aragon until it passed to James III of Majorca, who sold the city to the French king Philip VI in 1349, to raise funds for his ongoing struggle with Peter IV of Aragon. In the 14th century, Pope Urban VIII gave Montpellier a new monastery dedicated to Saint Peter, noteworthy for the very unusual porch of its chapel, supported by two high, somewhat rocket-like towers. With its importance steadily increasing, the city finally gained a bishop, who moved from Maguelone in 1536, and the huge monastery chapel became a cathedral. In 1432, Jacques Cœur established himself in the city and it became an important economic centre, until 1481 when Marseille overshadowed it in this role.

At the time of the Reformation in the 16th century, many of the inhabitants of Montpellier became Protestants (or Huguenots as they were known in France) and the city became a stronghold of Protestant resistance to the Catholic French crown. In 1622, King Louis XIII besieged the city which surrendered after a two months siege (Siege of Montpellier), afterwards building the Citadel of Montpellier to secure it. Louis XIV made Montpellier capital of Bas Languedoc, and the town started to embellish itself, by building the Promenade du Peyrou, the Esplanade and a large number of houses in the historic centre. After the French Revolution, the city became the capital of the much smaller Hérault. 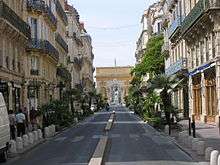 During the 19th century the city developed into an industrial centre. In the 1960s, its population grew dramatically after French settlers in Algeria were resettled in the city following Algeria's independence from France. In the 1980s and 1990s, the city drew attention with a number of major redevelopment projects, such as the Corum and especially the Antigone District. 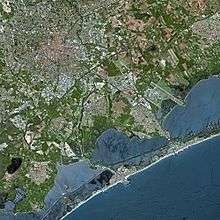 The city is situated on hilly ground 10 km (6 mi) inland from the Mediterranean coast on the River Lez. The name of the city, which was originally Monspessulanus, is said to have stood for mont pelé (the naked hill, because the vegetation was poor), or le mont de la colline (the mount of the hill)

Montpellier's highest point is the Place du Peyrou, at an altitude of 57 m (187 ft). The city is built on two hills, Montpellier and Montpelliéret, thus some of its streets have great differences of altitude. Some of its streets are also very narrow and old, which gives it a more intimate feel. 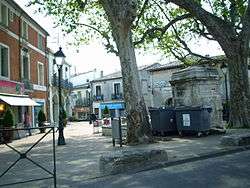 For most of its history, and even today, Montpellier is known for its significant Spanish population, heritage and influence. Montpellier also houses important Moroccan Algerian, and Italian communities 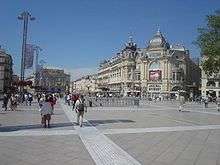 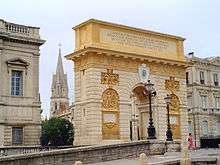 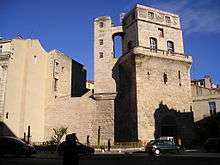 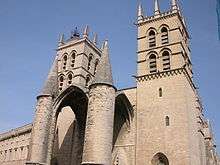 The University of Montpellier is one of the oldest in the world, founded in 1160, and having been granted a charter in 1220 by Cardinal Conrad von Urach and confirmed by Pope Nicholas IV in a papal bull of 1289. It was suppressed during the French Revolution but was re-established in 1896.

It is not known exactly at what date the schools of literature were founded which developed into the Montpellier faculty of arts; it may be that they were a direct continuation of the Gallo-Roman schools. The school of law was founded by Placentinus, a doctor from Bologna university, who came to Montpellier in 1160, taught there during two different periods, and died there in 1192. The school of medicine was founded perhaps by a graduate of the Muslim Spain medical schools; it is certain that, as early as 1137, there were excellent physicians at Montpellier. The statutes given in 1220 by Cardinal Conrad, legate of Honorius III, which were completed in 1240 by Pierre de Conques, placed this school under the direction of the Bishop of Maguelonne. Pope Nicholas IV issued a Bull in 1289, combining all the schools into a university, which was placed under the direction of the bishop, but which in fact enjoyed a large measure of autonomy.

Theology was at first taught in the convents, in which St. Anthony of Padua, Raymond Lullus, and the Dominican Bernard de la Treille lectured. Two letters of King John prove that a faculty of theology existed at Montpellier independently of the convents, in January 1350. By a Bull of 17 December 1421, Martin V granted canonical institution to this faculty and united it closely with the faculty of law. In the 16th century the faculty of theology disappeared for a time, when Calvinism, in the reign of Henry II of France, held complete possession of the city. It resumed its functions after Louis XIII had reestablished the royal power at Montpellier in 1622; but the rivalries of Dominicans and Jesuits interfered seriously with the prosperity of the faculty, which disappeared at the Revolution. The faculty numbered among its illustrious pupils of law Petrarch, who spent four years at Montpellier, and among its lecturers Guillaume de Nogaret, chancellor to Philip the Fair, Guillaume de Grimoard, afterwards pope under the name of Urban V, and Pedro de Luna, antipope as Benedict XIII. But after the 15th century this faculty fell into decay, as did also the faculty of arts, although for a time, under Henry IV of France, the latter faculty had among its lecturers Casaubon.

The Montpellier school of medicine owed its success to the ruling of the Guilhems, lords of the town, by which any licensed physician might lecture there; there was no fixed limit to the number of teachers, lectures were multiplied, and there was a great wealth of teaching. Rabelais took his medical degrees at Montpellier. It was in this school that the biological theory of vitalism, elaborated by Barthez (1734–1806), had its origin. The French Revolution did not interrupt the existence of the faculty of medicine.

The faculties of science and of letters were re-established in 1810; that of law in 1880. It was on the occasion of the sixth centenary of the university, celebrated in 1889, that the Government of France announced its intention—which has since been realized—of reorganizing the provincial universities in France. 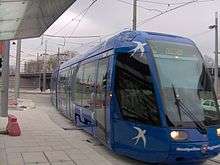 Line 1 of the tramway network, at the Corum stop.

Montpellier is served by railway, including TGV highspeed trains. Montpellier's main railway station is Saint-Roch. There are plans to construct a high-speed railway linking Nîmes and Montpellier with the LGV Méditerranée.[9] 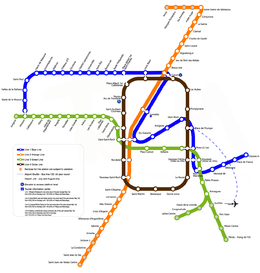 The Montpellier – Méditerranée Airport is located in the area of Fréjorgues, in the town of Mauguio, southeast of Montpellier.

The Transports de l'agglomération de Montpellier (TaM) manages the city's public transportation, including its 56-kilometre (35 mi) tramway network consisting of four lines and several parking facilities.[10] Line 1 runs from Mosson in the west to Odysseum in the east. Line 2 runs from Jacou in the northeast to St. Jean-de-Vedas in the southwest. Line 3 and Line 4 opened in April 2012. Line 3, which is 22.4-kilometre (13.9 mi) long, links Juvignac and Perols with a branch to Lattes and serves 32 stations. Line 4 circles the centre and serves as a connector line between the various arms of tram system. They intersect at Gare St. Roch station, Rives du Lez and Corum.

The city is home to the Open Sud de France tennis tournament since 2010, and will host the XXXI World Rhythmic Gymnastics Championship.

The main athletics stadium is the Philippidès Stadium, which is owned by the University of Montpellier.

The Festival de Radio France et Montpellier is a summer festival of opera and other music held in Montpellier. The festival concentrates on classical music and jazz with about 150 events, including opera, concerts, films, and talks. Most of these events are free and are held in the historic courtyards of the city or in the modern concert halls of Le Corum. Le Corum cultural and conference centre contains 3 auditoriums. The city is a centre for cultural events since there are many students. Montpellier has two large concerts venues: Le Zenith Sud (7.000 seats) and L'Arena (14.000 seats). 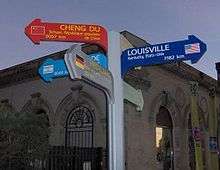 Montpellier is twinned with:

Montpellier was the birthplace of:

Other famous inhabitants include:

Other locations named after Montpellier

"Montpellier" is used as the name of other towns and streets in as many as four continents.[16] Many places in England, Scotland, Wales and Ireland carry the name Montpellier. Often they are in resort locations claiming some of the healthy attributes for which the French city was renowned in earlier centuries. The variant spelling "Montpelier" is common, and is of quite early provenance. Brewer uses that spelling. The first example was the early 19th-century suburb of Montpelier in Brighton.[17]

Secondary Montpelliers/Montpeliers are also found in Australia, Canada, South Africa, and the Caribbean.