F.C. Tokyo (FC東京, Efushī Tōkyō) is a Japanese association football club playing in J1 League. Its hometown is Tokyo prefecture. The team is one of only four in the J. League to be simply called Football Club without an extended name.

The team started as a company team, Tokyo Gas Football Club (東京ガスFC)[1] Their first appearance in the national leagues was in 1991, the last season of the old Japan Soccer League.[2] With addition of the Brazilian football player Amaral and the manager Kiyoshi Okuma at the helm, the team gradually became competitive and in 1997, the team finished second, winning the JFL championship the next year. However, at the time the team lacked the necessary qualifications for a promotion to the J1 league and so stayed in J2.

Following this, on October 1, 1998, companies like Tokyo Gas, TEPCO, ampm, TV Tokyo, and Culture Convenience Club, set up a joint company Tokyo Football Club Company with the aim of making the team eligible for joining the J. League. In 1999, the same year the team became eligible, they finished second in the J2 league and were automatically promoted to J1 beginning in the 2000 season. Despite a widespread belief that the team would barely win enough to stay in the J1, the team won four games in a row since its opening game and managed to finish at the 7th spot. 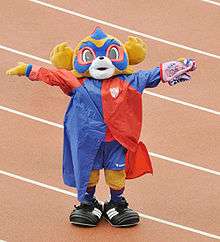 Helped by its winning record, the attendance shot up and it is still above that of well-known Tokyo Verdy 1969 that moved its home town from Kawasaki, Kanagawa in 2001. Since 2002, the team welcomed Hiromi Hara as its manager and aimed for a championship with a strong offense. The 2003 season had the team finish in 4th, its highest ever. In August of the same year, it held a friendly match against one of the greatest football clubs, Real Madrid losing 3–0 but gaining valuable experiences both on and off the field for what it takes to be a great football club.

Long-time leader Amaral, nicknamed The King of Tokyo by his fans, departed the team to join Shonan Bellmare in 2004. He was replaced by Athens Olympics national football team player Yasuyuki Konno from Consadole Sapporo. In November of the same year, it won the J. League Yamazaki Nabisco Cup for its first major title since joining the J. League.

After 10 years of participation in the J. League without a mascot character, the team adopted Tokyo Dorompa, a tanuki-like figure, as its mascot in January, 2009.

On December 4, 2010 FC Tokyo had to win their final game of the season away to already relegated Kyoto Sanga FC. FC Tokyo lost 2–0 and went back down to the second tier for the first time in 11 years. Nevertheless, they bounced back at the first attempt, winning the J2 title in November 2011.

Before their 2011 Emperor's Cup win, FC Tokyo reached the semifinals of the competition three times: in 1997 (as Tokyo Gas), 2008, and 2010. Their 2011 win was remarkable in that the club was a second division team during the season. They became the first J2 champions, and third second-tier champions overall (after NKK S.C. in 1981 and Júbilo Iwata in 1982), to accomplish the feat. 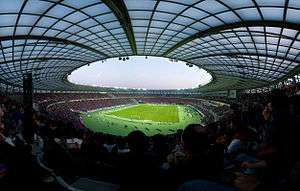 F.C. Tokyo uses Ajinomoto Stadium as its home ground (the official name of this stadium is Tokyo Stadium). For a long time it did not have a home stadium of its own and played at various football fields such as the National Yoyogi Stadium, the National Nishigaoka Football Field, Edogawa Special Ward Stadium, and the Komazawa Olympic Park Stadium, but in 2001 it finally found a permanent home. Club's training grounds are Sarue Ground in Koto, Tokyo and Kodaira Ground in Kodaira, Tokyo.

The following players have represented their country at the World Cup whilst playing for F.C. Tokyo:

The following players have represented their country at the Summer Olympic Games whilst playing for F.C. Tokyo: