The Budokan was the location where many "Live at the Budokan" albums were recorded, including those of Bob Dylan, Cheap Trick, Dream Theater and Ozzy Osbourne. The Nippon Budokan, however, was originally built for the judo competition in the 1964 Summer Olympics, hence its name, rendered in English as Martial Arts Hall. 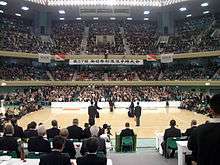 Though it still functions as a venue for big musical events, its primary purpose is for Japanese martial arts (indeed, the name literally means "Japan Martial Arts Hall"). The national championships of the different branches of the martial arts (judo, kendo, karate, aikido, shorinji kempo, kyūdō, naginata, etc.) are held annually at the Budokan. For wrestling fans the Budokan means professional wrestling's big shows. Now, the Budokan is mostly used by Pro Wrestling Noah, who often hold major events there.

Kickboxing is also, in its heyday large events were held at the Nippon Budokan. On June 28, 1969 "Champion Carnival" Oriental, in the main event Tadashi Sawamura has his first successful defense of Oriental Light Welterweight title.

The Muhammad Ali vs. Antonio Inoki hybrid rules fight held at the Budokan in 1976 is seen as a forerunner to mixed martial arts.

K-1 has held events at the Nippon Budokan the box office in 1994 and raising an army second time, using K-1 WORLD GP in the opening round in 2004. In K-1 WORLD MAX, which held the tournament finals to determine the first champion in 2002, up from 2007 to 2009 has been used as the main venue. Budokan is one of the venue has been positioned in the K-1 is also important for this purpose.

In mixed martial arts VALE TUDO JAPAN '95 and PRIDE.3 became the venue of the other, Pancrase had been used in pace of nearly once a year from 1994 to 2000. On April 25, 2010, Hidehiko Yoshida "entertainer retirement ASTRA were held. " Incidentally, Yoshida Judo also the last official game was played, which is the All Japan Judo Championship was held at the Nippon Budokan in 2002. It will host the judo competition at the 2020 Summer Olympics.[2]

A concert stage at Budokan

The Beatles were the first rock group to perform here, in a series of shows in June/July 1966. Their appearances were met with opposition from those who felt the appearance of a western pop group would defile the martial arts arena.[3]

In July 1973 Japanese television recorded the Santana performance at Budokan. In 1978, The Alive II Tour, Kiss made perform 5 sold-out nights at Tokyo's Budokan, breaking their previous record of 4 one year earlier, as well as breaking the previous record by The Beatles.

However, the Budokan gained worldwide fame when American artists Cheap Trick and Bob Dylan used the arena to record their performances, Cheap Trick at Budokan (1978) and Bob Dylan at Budokan (1979), respectively. In explaining the popularity of the venue for live albums, Eric Clapton described the Tokyo audience as "almost overappreciative" in interviews promoting Just One Night (1980), his own live album recorded at Budokan.

Artists to release live recordings from this venue include:

American crossover thrash band Stormtroopers of Death released a live album titled Live at Budokan (1992), though the title was in jest and the album was recorded at famed New York City venue The Ritz.

The original Beatles concert is heavily bootlegged on audio and video;[9] the first night's concert video was officially released by Apple in Japan only as Beatles Concert at Budokan 1966, and excerpts are shown in The Beatles Anthology, while the second Anthology album included the first show's performances of "Rock and Roll Music" and "She's A Woman". The venue is one of the stages in The Beatles: Rock Band video game.[10] Chatmonchy currently holds the record for the largest crowd at Budokan.

The National Memorial Service for War Dead is held with the attendance of the Prime Minister, the Emperor and the Empress annually in Budokan on August 15, the day of Japan's surrender.

As well as holding the Live Concert in appreciation of the Popular Anime series Lucky Star:Live in Budokan (Anata No Tame Dakara)

A concert was held in honor of Studio Ghibli's 25th anniversary at the Budokan, hosted by Joe Hisaishi. It included repertoire from most of the films Hisaishi composed for Hayao Miyazaki's Studio Ghibli filmography.

Diana Ross performed and taped her "Here and Now" television special in 1991 to a sold out audience.

The Japan Record Awards took place in the arena from 1985 to 1993 where all of the artists from around the country receive these awards.

Professional wrestler and legend in Japan Kenta Kobashi wrestled his final match in Budokan on May 11, 2013. Kobashi is synonymous with the arena along with fellow wrestlers Toshiaki Kawada and the late Mitsuharu Misawa.

In November the Budokan is a 2 day-venue for the annual Japan Self-Defense Force Marching Festival, a yearly tradition and the nation's military tattoo first held here in 1978.[11]

A fictional concert hall based on Nippon Budokan appeared in the music video game Guitar Hero III: Legends of Rock under the name "Kaiju Megadome." The Beatles' appearance at Nippon Budokan was featured in The Beatles: Rock Band.