This article is about the Qatari football team. For other uses, see Al-Ahly (disambiguation).

Al Ahli SC (Arabic: النادي الأهلي الرياضي‎‎), also known as Al Ahli Doha is a Qatari multi-sport club based in Doha. It is most notable for its professional association football section. Their home stadium is Khalifa International Stadium. It is the oldest sports club in Qatar, having been established in 1950.

Al Ahli was founded under the name Al Najah Sports Club in 1950, rendering it the oldest sports club in Qatar. Al Najah SC was established by the founders of another club, called Sawt al-Arab, which was subsequently disbanded. The most prominent of the founders were Naji Musaad, the first president of the club. The club's first headquarters was located in Barahat Al Jufairi, in a residential house which was rented at a monthly fee of 70 Indian rupees. In 1964, the club was formally founded under resolution no. 2. Their first match abroad was scheduled to take place against Al Muharraq. After travelling to Bahrain by sea, the club was turned down because their squad comprised foreign players. Instead, they played against Al Nusoor, whom they defeated 3–1.[1]

In 1972, Al Najah was merged with another local club under its current name, Al Ahli Sports Club. The first board of directors was formed with eight members, and the club's colors were officially decided as green and white.[1] Early managers after the merger include Mohammed Kheiri, the first manager of Al Ahli Sports Club, Sudanese Abdullah Balash, Lebanese Omar Khatib and Sudanese Hassan Osman.[2] They played a friendly against Pelé-led Santos in 1973 at Doha Stadium.[3] In the 1983/84 season, the club received a new headquarters, equipped with modern training and recreational facilities, as did all of the other sports clubs in Qatar.

In the early nineties, under the presidency of Sheikh Khalid bin Ali Al Thani, the club was relegated to the Qatari 2nd Division for the first time in its history. In an attempt to improve its younger generation of players by providing them with invaluable first team experience, the youth team had been given an opportunity to earn promotion back to the first division. They were unsuccessful, and only were runners up that year.[4]

The club has won one domestic trophy since its formation, the Emir Cup. This competition which was secured four times, with the first triumph coming in the inaugural edition under coach Mohammed Kheiri.[5]

Al Ahli play their home matches at Hamad bin Khalifa Stadium which has a capacity of 12,000 seats.

The club has one of the most consistently high home attendances in the Qatar Stars League. On 11 April 2014, they set a new league record for final match day attendance with 10,142 fans attending the league match against Al Sailiya.[6]

As of Qatar Stars League: 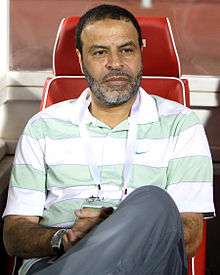