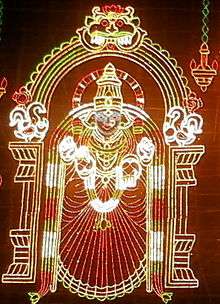 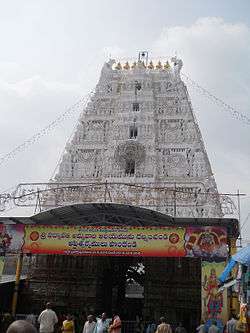 Alamelu also known as Alamelu manga and Padmavati[1] (often spelled "Padmavathi" or "Padmavathy"), is a Hindu devi. Believed to be a form of Lakshmi, the Hindu devi of wealth and good fortune, Alamelu Manga is the consort of Sri Venkateshwara. The name Padmavati is Sanskrit for "she who emerged from lotus". The most prominent shrine of Padmavathi is Sri Padmavathi Ammavari Temple situated at Tiruchanur, a suburb of Tirupati City. Tradition dictates that every pilgrim to Tirupati must offer obeisance at this temple after visiting the Tirumala Venkateswara Temple.

Alamelu Manga is a major deity in Hinduism worshipped as an aspect of Goddess Lakshmi.It is believed that her intercession is indispensable to gaining the favour of the lord, it is also believed that Lakshmi is co-omnipresent, co-illimitable and the co-bestower of moksham along with Lord Vishnu. Sri Alamelumanga is the mother-goddess figure for staunch Sri Vaishnavites in particular and Hindus in general.

Poet Sri Annamacharya, was a staunch devotee of Sri Alamelu Mangamma. Most of his creative output is either inspired or centers around the deity. Many of the most famous and popular Kritis of Annamacharya personify her benevolence and grace.

The name Alamelu Manga or Alarmel Mangai is a Tamil term which translates conjoint of the words Alar (lotus) and Mel (aloft or up); Mangai means "(auspicious) lady" in pure Tamil. In Alarmel mangkai is the goddess Lakshmi.[3] The name Alamelu has traditionally been a popular one in South India. Apart from that basic name, several variations are popular.