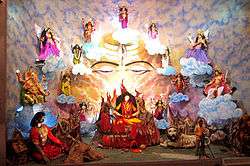 These nine forms are worshipped together during the Navratri(Nine Divine Nights) celebrations, that occur four times throughout the year, namely:

Durga is the Mother Goddess of the Hindus. She is known by a variety of names - including Devi, Shakti, Adi Parashakti and Parvati.The Navadurga are the different forms of Devi:

Each one of Navadurga is known by a particular name and each goddess has Her respective governing planet, iconography(in the form of a mount, number of hands and items held), mantra for invocation (usually repeated 108 times at each sitting during the period of Navratri), dedicated day of Navratri worship and respective prayers(pratharna, stuti, dyana, etc.):

Iconography: She rides a bull, carrying a Trishul(trident) in her right hand and a lotus flower in Her left hand.

Iconography: Walks on bare feet, carrying a japa mala in Her right hand and a kamandalu in Her left hand.

Iconography: Goddess Chandraghanta mounts the tigress. She wears the semi-circular moon(Chandra) on her forehead. The half-moon on her forehead looks like the bell(Ghanta) and hence, Her name. She is depicted with ten hands. Goddess Chandraghanta carries Trishul, Gada, sword and kamandalu in Her four left hands and keeps the fifth left hand in Varadamudra. She carries a lotus flower, arrow, Dhanush and Japa Mala in Her four right hands and keeps the fifth right hand in Abhaya Mudra.

Special powers: This form of the Mother Goddess is ready for war with all her weapons, to protect the peace and welfare of Her devotees.It is believed that the sound of the moon-bell on her forehead drives all types of spirits away from Her devotees.

Iconography: Rides on a lioness and has eight hands. She holds a kamandalu, Dhanush, Bada and Kamal in Her right hands. Her left hands hold Amrit Kalash(pot of nectar), japa mala(prayer beads), Gada and Chakra - in that order.

Specific power: She created the universe in the flash of Her smile and is believed to bestow siddhis(supernatural powers) and niddhis(wealth) to Her devotees.

Iconography: Goddess Skandamata mounts the ferocious lion. She carries baby Skanda in her lap. Lord Skanda(also known as Kartikeya or Lord Murugan) is the brother of Ganesha. Goddess Skandamata is depicted with four hands. She carries lotus flowers in Her upper two hands. She holds baby Skanda in one of Her right hands and keeps the other right hand in Abhayamudra. She sits on a lotus flower and because of that, is also known as Goddess Padmasana.

Special powers: Devotees who worship this form of the Mother Goddess get the added benefit of blessings of Lord Skanda, the God of War(also known as Kartikeya).

Iconography: Goddess Katyayani rides on a magnificent lion and is depicted with four hands. She carries a lotus flower and sword in her left hands respectively and keeps her right hands in Abhayamudra and Varadamudras.

Iconography: Her complexion is dark black and She rides on a donkey. She is depicted with four hands. Her right hands are in Abhayamudra and Varadamudra. She carries a sword and deadly iron hook in her left hands.

Iconography: Goddess Siddhidatri sits on Kamal and rides on the lion. She is depicted with four hands. She has Gada in the one right hand, Chakra in the other right hand, lotus flower in the left hand and Shankh in the other left hand.

Specific power: She bestows all types of siddhi(supernatural powers) to her devotees and hence is worshipped by humans, ghandarvas, asuras and devas alike.