The son of former British Touring Car Championship driver Phil Dowsett,[2] Dowsett was educated at Elm Green Preparatory School in Little Baddow, followed by King Edward VI Grammar School in Chelmsford. He initially took up swimming as a sport before starting cycling on a mountain bike along with his father.[3]

Dowsett began his career at the Maldon and District Cycling Club in the City of Chelmsford.[4] soon recognised his talent, and Alex became part of the British Olympic Academy development team. He won the under-23 version of the British Time Trial Championships in 2008 and 2009. In 2010 he rode for American Trek-LiveStrong and won the under-23 European time trial championship.[5] He also won a silver medal in the Time Trial at the 2010 Commonwealth Games. 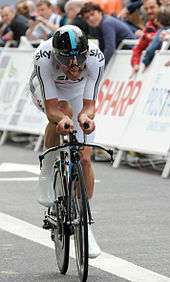 Dowsett at the 2011 Tour of Britain

Dowsett signed for British-based Team Sky as a neo-pro for the 2011 season. His first victory for Sky came in the London Nocturne event. Dowsett finished fifth overall in Danmark Rundt, helping team-mate Simon Gerrans to overall victory. He won the fifth stage of the Tour du Poitou-Charentes to finish second overall. In September, he became the British National Time Trial Champion. Dowsett won the time trial Stage 8a of the 2011 Tour of Britain.

In March 2012, Dowsett suffered a broken elbow in the Three Days of De Panne and as a result missed the classics season. Dowsett recovered to finish second in the National Road Race Championships, and later retained his National Time Trial Champion title. Later in September, Dowsett competed at the UCI World Road Race Championships in all three men's elite events, with a best placing of eighth in the individual time trial 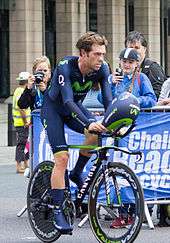 Dowsett at the 2014 Tour of Britain

On 30 October 2012, Dowsett signed with the Spanish Movistar Team for the 2013 season hoping to gain a ride on a Grand Tour.[6] After competing in the Classics season for Movistar Team, Dowsett was selected to ride the Giro d'Italia, his first Grand Tour appearance. Dowsett helped Movistar Team take second place in the team time trial on stage two. On stage eight, a 54.8 km (34.1 mi) individual time trial, Dowsett set the fastest time to record his biggest career victory to date, setting a time ten seconds faster than the second placed Bradley Wiggins.[7] In June, Dowsett won the British National Time Trial Championships for the third year in a row despite crashing early on in the course.[8]

In May 2014 Dowsett set a new British 10-mile time trial record in Cambridgeshire, clocking in at 17 minutes 20 seconds and beating Michael Hutchinson's previous record by 25 seconds.[9]

Dowsett (centre) in the leading group of the 2015 Vattenfall Cyclassics

Competing for England at the 2014 Commonwealth Games, Dowsett won gold in the Individual Time Trial.[10] After a long breakaway, Dowsett took the lead of the Tour of Britain on the sixth stage[11] but lost it before the end of the stage race to Dylan van Baarle and finished eighth overall.[12] His team announced that Dowsett had signed a three-year contract extension with them in September.[13]

In December 2014, Dowsett announced he would attempt to break the UCI Hour Record at the Lee Valley VeloPark on 27 February 2015.[14] However, he was forced to postpone the attempt after breaking his collarbone in a training accident.[15] The attempt instead took place at the Manchester Velodrome on 2 May 2015[16] where Dowsett set a new world record of 52.937 kilometres, beating Rohan Dennis' previous record by almost half a kilometre.[17] Two weeks later, Dowsett won his first ever stage race, the 2015 Bayern-Rundfahrt, where he claimed the overall victory a day after winning the Stage 4 individual time-trial. In June 2015 Dowsett clinched his fourth national time trial title, equalling the record of Stuart Dangerfield.[18]

Dowsett suffers from haemophilia.[20] Speaking on ITV's Cycle Show in July 2013, Dowsett cited this medical condition as being a key factor in his choosing competitive cycling in his youth, above other sports, because contact games such as football and rugby were considered too risky. He is believed to be the only able-bodied elite sportsman or woman with the condition.[3] As a result, he has a special exemption from the Union Cycliste Internationale's no needles policy, introduced in 2011,[21] to inject himself with the clotting protein Factor VIII every 48 hours. Dowsett runs the charitable foundation Little Bleeders to raise awareness of haemophilia.[3]