Quintana is a specialist climber, known for his ability to launch sustained and repeated attacks on ascents of steep gradient. He is also a good time trialist, making him a consistent contender for General Classification at stage races. His best career results are winning the 2014 Giro d'Italia and 2016 Vuelta a España, as well as a 2nd place overall in the Tour de France of 2013 and 2015.

His brother Dayer Quintana is also a professional cyclist, and is a member of the Movistar Team.

Born in Cómbita, a town near the capital of Boyacá, Tunja,[5] in Colombia, to a farming family,[1] Quintana comes from a humble background, but his family still saved up to buy Quintana a second-hand mountain bike to make the 16 km (9.9 mi) journey through the Eastern Ranges of the Andes to school[6] and to travel from village to village to sell fruit and vegetables. At the age of 16 he also started working as a taxi driver using his father's car.[7] Quintana resides in Cómbita, splitting his time between his native country and Pamplona in Navarre.[8] His parents' names are Luis Quintana and Eloisa Rojas, and he has four siblings: sisters Nelly and Lady, and brothers Willington and Dayer.[1]

At the age of 15 he was hit by a taxi whilst riding, leaving him in a coma for five days. Despite this, his father, a cycling fan, recognised Nairo's potential and spent 300,000 Colombian pesos (around £100) on a racing bike to see if Nairo could make a career in the sport.[7]

He started his career on the team "Boyacá es para Vivirla". In 2010, Quintana won the Tour de l'Avenir as part of the team "Café de Colombia – Colombia es Pasión", proving to be one of the great prospects for the future of Colombian cycling.[9]

In 2012, Quintana moved to Europe to join the Spanish Movistar Team. He won the overall classification in the Vuelta a Murcia. Later, he took a prestigious victory at the Critérium du Dauphiné, when he sparked a counter-attack after a select group of riders including leader Bradley Wiggins reached the last escapee of the day. He held on to his solo lead in the descent leading to Morzine.[10] After winning that stage, he later ended up winning the Route du Sud that year. Quintana made his Grand Tour debut at the Vuelta a España, where he was one of Alejandro Valverde's key climbing domestiques as the Spaniard finished second overall. Quintana finished 36th overall. In October, Quintana won the Giro dell'Emilia. 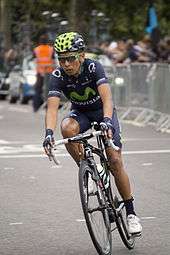 Quintana at the 2013 Tour of Britain

In 2013, Quintana won stage 3 of the Volta a Catalunya, and the following month, he won the queen stage of the Tour of the Basque Country by sprinting to victory after the final climb in Eibar–Arrate, two seconds before a group of six fellow overall contenders.[11] Quintana took the overall win in the final time trial by finishing second behind Tony Martin (Omega Pharma–Quick-Step), gaining enough time over Team Sky's Sergio Henao to take the leader's jersey from him.[12]

At the 2013 Tour de France, Quintana attacked on the Col de Pailheres during Stage 8 and became the first man to cross the highest pass that year. He was later overtaken, on the stage's penultimate climb, by race favorite Chris Froome. Quintana nonetheless took the lead of the young rider classification and received the award for that stage's most aggressive rider.[13] On stage 15 to Mont Ventoux, Quintana again attacked early on and only the race leader Froome was able to match him, eventually dropping him in the final two kilometers of the climb after they had raced up much of it together.[14] After stage 15, Quintana was 6th overall. Stage 18 for the first time including doing the famous and iconic Alpe d'Huez climb twice. Quintana's 4th-place finish moved him into a 3rd place on the podium position in the overall standings for the first time, in his first TDF. In stage 20, he didn't just defend his 3rd place podium position, he attacked Froome riding away from him in the last kilometer during the novel climb to Annecy-Semnoz to win the stage over Joaquin Rodriquez and Froome and moving securely into second place overall where he finished the Tour. He also won the Young Riders Jersey and the King of the Mountains competition. Finishing second overall in the General Classification was the best result for a Colombian or Latin-American rider in the Tour the France and the first Tour debutant to finish on the podium since Jan Ullrich in 1996. After the Tour, Quintana went on to win the Vuelta a Burgos where he won stage 5 of the race after dropping Vincenzo Nibali on the final climb. 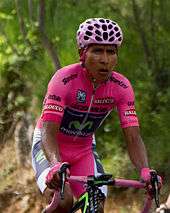 Quintana in the pink jersey at the 2014 Giro d'Italia

Because of the high mountains included in the 2014 Giro d'Italia, Quintana decided to aim for the Giro and skip the Tour de France.[15] His 2014 season started off with an early overall victory at the Tour de San Luis after winning the mountaintop finish of Stage 4. Quintana placed second overall behind Alberto Contador at Tirreno-Adriatico in March,[16] and finished fifth in the Volta a Catalunya after getting sick between the races.[17]

At the Giro, Quintana entered the race in weakened condition mainly due to the illness he caught early in the season. Quintana's Movistar team began with 8th place in the opening team time trial in Belfast, 55 seconds down on winners Orica Greenedge, after rain during their effort.[18] In Stage 6, Quintana was caught up behind a huge crash as the peloton approached the finishing climb of Montecassino, which saw him sit 2 minutes and 8 seconds behind leader Michael Matthews. After the individual time trial on Stage 12, Quintana was 6th overall, 3 minutes and 29 seconds behind new leader Rigoberto Uran.[19] Quintana started to show strong form on stages 14 and 15, reducing the gap to 2'40". He would later reach his top form in the last week of the race.[20] In Stage 16, he claimed the leader's maglia rosa in controversial circumstances as some of his top rivals had mistakenly thought that the descent of the Stelvio was neutralized; riding through dense fog and low visibility, Quintana joined an attack with Pierre Rolland and Ryder Hesjedal, eventually winning the stage and gaining 4'11" on Uran. In stage 19, Quintana flew up the Monte Grappa, winning the mountain time trial by 17 seconds over Fabio Aru to extend his overall lead over Uran to 3 minutes and 7 seconds. He maintained his lead on Monte Zoncolan on Stage 20 and the final stage into Trieste. Quintana also won the white jersey for best young rider.[21]

After the Giro, Quintana took a couple months off from racing. He returned to Europe in August aiming to win the Vuelta a España. Two weeks before the Vuelta, Quintana won the Vuelta a Burgos, winning stage 3 and coming in second in the final time trial to give himself enough time over second placed Daniel Moreno. In the Vuelta, Quintana had the race lead coming in to Stage ten's ITT. However, he crashed badly after misjudging a bend and lost 4 minutes and the red jersey.[22] He crashed again at the beginning of the next stage and withdrew from the race due to a broken collarbone.[23]

Quintana started his 2015 season at the Tour de San Luis.[24] He finished third overall in the race.[25] Quintana was originally scheduled to ride the Vuelta a Andalucía, but a crash at the Colombian national road race championships caused his withdrawal.[26] His next race was therefore the Tirreno–Adriatico. Here he took his first win of the 2015 season on the summit finish at Terminillo, taking over the race lead as well. He won in a blizzard of snow.[27] He would not relinquish the lead over the 10 kilometre final time trial and went on to win the overall as well as the young rider jersey.[28] Quintana was selected by his team for two cobbled classics (the E3 Harelbeke and the Dwars door Vlaanderen) in order to prepare him for the cobblestones that had been scheduled to be part of the Tour de France.[29] Quintana continued his Tour de France preparation by racing the Tour de Romandie and Tour of the Basque Country, finishing in 8th and 4th place respectfully. He then raced the Route du Sud where he battled Alberto Contador on stage 3 before finishing 2nd overall.[30] Quintana then stayed home to train in June further before coming to France for the Tour. 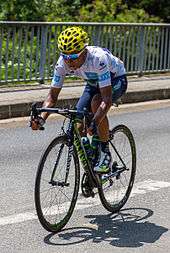 Quintana wearing the white jersey at the 2015 Tour de France

On second stage of the Tour de France Quintana was caught out of a split in the peloton caused by high winds and lost a minute to Chris Froome and other favorites. On stage ten, the first mountain day, Quintana was the only rival that could stay with Chris Froome, finishing another minute behind him. Quintana then tried to distance himself from the yellow jersey in the last week of the Tour, advancing himself into second place overall on stage 17. Facing a 2'38 deficit to Froome on stage 19, Quintana promised he'll attack Froome and he fulfilled that promised, gaining 30 seconds on Froome by the end of the stage.[31][32] And on the penultimate stage, featuring the Alpe d'Huez climb, Quintana attacked Froome again, using his teammates Alejandro Valverde and Winner Anacona to prize out an advantage before going solo with five kilometers to go. He gained time on Froome all the way to the finish, finishing second on the stage. Quintana finished the Tour in second place, 1'12 behind Chris Froome with his teammate Alejandro Valverde in third place overall. He also won the white jersey, with his Movistar Team winning the team classification.[33][34]

After the end of the Tour, Chris Froome, Quintana, Valverde, and Vincenzo Nibali, the top four finishers in the Tour de France, announced their intentions to race the following grand tour, the Vuelta a España.[35] However, early on, Quintana didn't look like he was on his best form. On stage 11, the queen stage, he lost three minutes to race leader Fabio Aru, falling to 9th place overall. Quintana admitted that he was suffering from a sickness and that he was considering about abandoning the Vuelta.[36] However, he never did and came back to form on stage 14, finishing in sixth place and taking several seconds out of his GC rivals. He began his comeback on stage 17, an individual time trial, finishing a surprising sixth place and advancing himself from eighth place overall to fifth place overall.[37] On the penultimate stage, Quintana joined a breakaway late in the stage with Rafal Majka to end the race in fourth place overall, just 30 seconds off the podium.[38][39]

In November 2015 it was announced that Quintana would compete in the Tour de France, the Olympic road race and the Vuelta a España in 2016[40] and that he would start his season at the Tour de San Luis.[41] He finished third in San Luis behind his brother, Dayer, who took the win.[42] He went on to take the general classification at the Volta a Catalunya, becoming the third Colombian to win the race and the first to do so since Hernán Buenahora in 1998.[43] Two weeks later, and struggling with the effects of illness, he finished 3rd in the overall classification of the Tour of the Basque Country.[44] Quintana finished 3rd in the general classification of the Tour de France after suffering from allergies throughout much of the tour. Movistar Team won the team classification for the second year in a row. After the tour Quintana stated, "I won't take part in the Olympic Games. I want to recover and be ready for the Vuelta a España to give emotions and animate the race.”.[45] Quintana succeeded with this strategy and won the Vuelta a España ahead of Chris Froome with the Colombian Esteban Chaves finishing third.[46]