Ampleforth College is a coeducational independent day and boarding school in the village of Ampleforth, North Yorkshire, England. It opened in 1802 as a boys' school, and is run by the Benedictine monks and lay staff[1] of Ampleforth Abbey.

The school is in a valley with sports pitches, wooded areas and lakes. Its affiliated preparatory school, St Martin's Ampleforth, is across the valley at Gilling Castle. 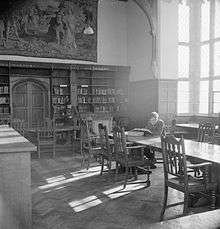 Pupils work in the library at Ampleforth in 1943

The college began as a small school for 70 boys founded by Benedictine monks, at Ampleforth Abbey, in 1802.[2] The school formally constituted as a Roman Catholic boarding school in 1900. Various buildings were slowly added, including the school theatre which was built in 1909. The first performances took place in 1910, and in 1922 a cinema projector was acquired, but could not be used until the following year when electric lighting and central heating were installed.[3]

The first boarding houses were founded in 1926 to accommodate the growing pupil numbers. In 1929, the Abbey gained ownership of Gilling Castle and opened a preparatory school. Gilling Castle Prep merged with the college's junior school in 1992 before taking on its current name St Martin's Ampleforth after absorbing another nearby prep school.

In 2002, girls were admitted for the first time when the sixth form became coeducational. The first girls' boarding house, St Margaret's, was opened in 2004.[4] Coeducation was extended to the Year 9 intake for the 2010–11 academic year and the college is now fully coeducational.[5]

Since the Catholic emancipation, Ampleforth gained a reputation as one of several schools, alongside The Oratory School and Stonyhurst, popular with the Catholic aristocracy and labeled the "Catholic Eton".[6][7]

In 1895, the North Eastern Railway built a 3 foot (0.91 m) gauge tramway from Gilling station on the Thirsk to Malton Line. The tramway was horse drawn and provided coal for the college to produce gas. It also transported passengers in open wagons. The tramway closed in 1923 when the college changed to electric lighting.[8] 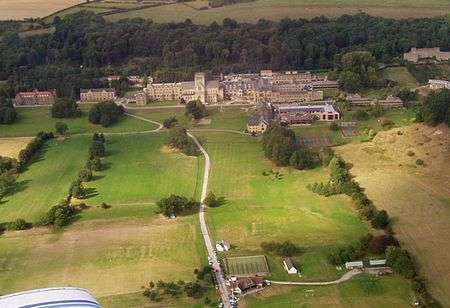 Ampleforth and the Valley from the air.

The school's primary concern is to provide pupils with not just academic, sporting and other achievements, but also "a spiritual compass for life": moral principles to give guidance in a secular world;[9] within a context where the "Benedictine ethos permeates pupils’ experience".[10]

The Good Schools Guide called the school an "Unfailingly civilised and understanding top co-educational boarding Catholic school that has suffered from time to time as a result of its long liberal tradition." The Guide adds also that there is "A refreshing openness and honesty about the place these days."[11]

Its academic admissions policy is not as exacting as that exercised by some other English public schools. As a result, the school is typically between 150 – 200 in the annual league tables of public examination results, although it was ranked 6th nationally in the 2004 "value added" table. It maintains a scholarship set, with about 5% of pupils gaining the offer of a place at Oxford or Cambridge.[12] More than 90% go on to university.

Though originally only a boys' school the college is now fully co-educational. In 2009 an OFSTED Social Care report said that the overall quality of care was outstanding.[13] 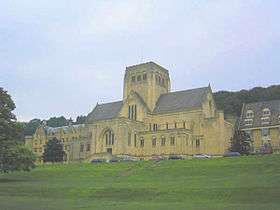 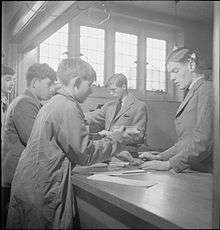 Boys buy sweets from the tuck shop at Ampleforth in 1943

In September 2005, Ampleforth was one of fifty of the country's leading independent schools which were found by the Office of Fair Trading to be operating a fee-fixing cartel in breach of the Competition Act of 1998. All of the schools were ordered to abandon this practice, pay a nominal penalty of £10,000 (£30,000 for foreign students) and make ex-gratia payments totalling three million pounds into a trust designed to benefit pupils who attended the schools during the period in respect of which fee information was shared.[14][15] However, Mrs Jean Scott, the head of the Independent Schools Council, said that they were unaware that the law had changed.[16]

Several monks and three members of the lay teaching staff molested children in their care over several decades. In 2005 Father Piers Grant-Ferris admitted 20 incidents of child abuse. This was not an isolated incident.[17] The Yorkshire Post reported in 2005: "Pupils at a leading Roman Catholic school suffered decades of abuse from at least six paedophiles following a decision by former Abbot Basil Hume not to call in police at the beginning of the scandal."[17] Following the case the Abbot, the Right Reverend Cuthbert Madden, offered a "heartfelt apology" to the victims of one member of staff.[18]

The College has since put in place a safeguarding policy which follows the local inter-agency procedures of the North Yorkshire Safeguarding Children Board and the guidance given in the Education (Independent School Standards) (England) Regulations 2010 and the National Minimum Standards for Boarding Schools.[19] Thus in 2016 Fr Madden temporarily stepped down from his role of Chairman of Governors during the investigation of indecent assault allegations made by four former pupils. The allegations were not proven and no charges were brought.[20][21][22]

The school has educated many notable figures such as Rupert Everett, Lord Fellowes of West Stafford Sir Antony Gormley and actor James Norton amongst others.[23]