The Abbey of Our Lady, Help of Christians, commonly known as Worth Abbey, is a community of Roman Catholic monks who follow the Rule of St Benedict near Turners Hill village, in West Sussex, England. It is attached to Worth School.

Like all Benedictine monks, the monks of Worth Abbey place the public prayer of the Church (the opus dei or work of God) at the centre of their lives. In common with other monasteries of the English Benedictine Congregation their tradition also places stress on daily periods of individual prayer and lectio divina (the prayerful reading of scripture). Through writing, preaching and hospitality they make this tradition available to others.

Through the Open Cloister, which incorporates a daily and residential retreat programme, Worth Abbey is host to over 2000 visitors a year. There is also an extensive schedule of residential conferences at the Abbey throughout the year. The community administers a charity, Outreach Peru, which supports a range of health and social welfare projects in Lima and other parts of Peru. Several of the monks serve as chaplains in Worth School, in the local parish around Turner's Hill, and in the Tinsley House immigration detention centre. Compass, a project for young people who are considering a religious vocation, is based at Worth and run by the monks in co-operation with other Catholic religious groups.

There is a Quiet Garden in the grounds of the Abbey, which, like the Abbey Church, is open to the public.

The Lay Community of St Benedict, a lay Benedictine movement, was founded at Worth Abbey and maintains close links with the monastic community.

Worth Abbey is a daughter house of St Gregory's Abbey, at Downside, in Somerset. Worth Priory was founded in September 1933 by Abbot John Chapman, a convert from the Church of England, who established a community of 17 monks in the property formerly known as Paddockhurst, near Turners Hill village. The conditions of sale of the property laid down that the name Paddockhurst should not be used by the new owners. Because the Priory lay within the boundaries of Worth parish, the name Worth was chosen for the site. The first prior of Worth, Dom Anselm Rutherford, chose Our Lady, Help of Christians, as the patron of the new monastery.[1] 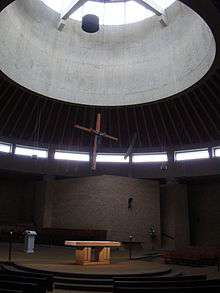 Interior of the abbey church

Abbot Christopher Butler of Downside decided that its two dependent Priories, Ealing and Worth, should each rapidly became independent houses: St Benedict's, Ealing, in 1946[2] and Our Lady, Help of Christians, Worth, in 1957.[3]

The first Prior of the independent Worth priory in 1957 was Dom Victor Farwell. He was elected the first Abbot in 1965, when the Priory was raised to the status of an Abbey. He remained its superior until 1988. Thus he was responsible for guiding the Worth community before, during and after the period of the Second Vatican Council. His successor, Dom Dominic Gaisford, was Abbot until his untimely death in 1994. The third Abbot of Worth, Dom Stephen Ortiger, served the community from 1994 to 2002. The fourth Abbot, Dom Christopher Jamison served from 2002 to 2010. The fifth Abbot, Dom Kevin Taggart, was elected in 2010, retiring in 2013. In August 2013, the community elected Dom Luke Jolly, the first former pupil of Worth School to become abbot, as the sixth Abbot.

As an independent Abbey, Worth has been involved in a number of different pastoral endeavours. Worth School, a boarding and day school, was opened shortly after the Abbey became independent of Downside. In 1964, parish work began in the immediate locality of the Abbey. In 1968 a long-term missionary connection with Peru began when monks from Worth built a farm and mission in the remote Apurimac valley, while in Lima they founded a monastery, a large parish and a health centre. Since 1990, this connection has been continued through the charity Outreach Peru.[4] In 1971, the Worth Abbey Lay Community launched the idea of lay participation in monastic life for young people, growing to become, by 2003, an independent lay movement as the Lay Community of St Benedict.[5] Between 1983 and 1990, St Peter's, East Dulwich,[6] became the home to an experimental urban monastic community jointly founded by Worth Abbey and the Anglican Diocese of Southwark. The work of formation in Christian faith and spirituality which began there is continued in The Open Cloister.[7]

The Abbey Church, designed by the UK architect Francis Pollen (died 1987) in the period immediately following the Second Vatican Council, was begun in 1966, and came into use in 1974. The church was consecrated for worship in 1975, and work continued on the structure of the building until its completion in 2001. The church adjoins the monastery buildings, also designed by Francis Pollen, which were completed in 1989. In 2010–11, the Abbey Church was extensively restored and refurbished, and was equipped with purpose built furniture for the first time. The design of the furnishings and the overall supervision of the refurbishment was the work of the UK designer Thomas Heatherwick.[8]

In May 2005, BBC Two broadcast The Monastery, a three-part documentary series filmed at Worth Abbey. This was followed in June 2006 by The Monastery Revisited. In 2010 "The Big Silence" was broadcast.[9]