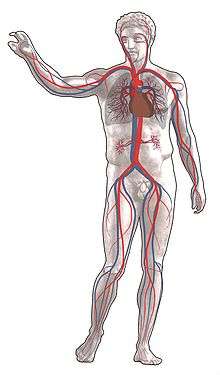 Angiology (from Greek ἀγγεῖον, angeīon, "vessel"; and -λογία, -logia) is the medical specialty which studies the diseases of the circulatory system and of the lymphatic system, i.e., arteries, veins and lymphatic vases, and its diseases. In the UK this field is more often termed angiology, and in the United States the term vascular medicine is more frequent. The field of vascular medicine (angiology) is the field that deals with preventing, diagnosing and treating vascular and blood vessel related diseases.

Cardiovascular risk factors such high blood pressure, elevated cholesterol and others fall under the specialty of vascular medicine. Hence a vascular medicine specialist should be able to address most of the major diseases in our age in a comprehensive manner, using a unique perspective.

In Europe, vascular medicine (angiology) training is well established in some European countries. The first European educational Working Group was born in 1991 in Milan (EWMA)becoming in 1998 a European Scientific Association VAS Vascular Independent Research and Education European Organization with several European educational programmes:European Felloship, European Master, CESMA-UEMS European Diploma and Postgrad Courses. In the United States there are several independent vascular medicine training programs and twelve NIH funded three-year programs as well. These programs are suitable for either Internal medicine specialists as a fellowship or for cardiologists. In 2005, the first vascular medicine boards were administered by the American Board of Vascular Medicine.