Cardiothoracic surgery is the field of medicine involved in surgical treatment of organs inside the thorax (the chest)—generally treatment of conditions of the heart (heart disease) and lungs (lung disease). Cardiac surgery (involving the heart and great vessels) and thoracic surgery (involving the lungs) are separate surgical specialties, except in the United States, Australia, New Zealand, and in some EU countries, such as the United Kingdom and Portugal.[1]

The highly competitive Surgical Education and Training (SET) program in Cardiothoracic Surgery is six years in duration, usually commencing several years after completing medical school. Training is administered and supervised via a bi-national (Australia and New Zealand) training program. Multiple examinations take place throughout the course of training, culminating in a final fellowship exam in the final year of training. Upon completion of training, surgeons are awarded a Fellowship of the Royal Australasian College of Surgeons (FRACS), denoting that they are qualified specialists. Trainees having completed a training program in General Surgery and have obtained their FRACS will have the option to complete fellowship training in Cardiothoracic Surgery of four year in duration, subject to college approval. It takes around eight to ten years minimum of post-graduate (post-medical school) training to qualify as a cardiothoracic surgeon. Competition for training places and for public (teaching) hospital places is very high currently, leading to concerns regarding workforce planning in Australia.

Thoracic surgery is its own separate 2-3 year fellowship of general surgery in Canada.

In the UK, you have to train for an MBBS, typically for 5 years, and if you're doing a BSc as well, 6 years usually. After you apply for a specialty place, or core surgical training (which is less competitive than going straight into the speciality). If you go for the core surgical training, you can then apply on the third year for cardiothoracic surgery, which at that point is much less competitive. Once you're training for the speciality, you may choose to subspecialise in perhaps: aortic surgery; adult cardiac surgery; thoracic surgery; paediatric cardiothoracic surgery; adult congenital surgery. This is a rewarding and technically challenging speciality, similar to interventional cardiology in some aspects. 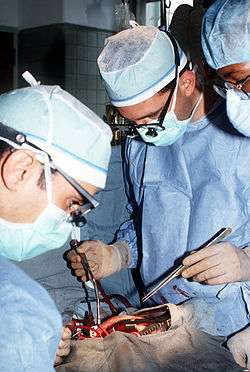 The American Board of Thoracic Surgery offers a special pathway certificate in congenital heart surgery which typically requires an additional year of fellowship. This formal certificate is unique because pediatric cardiac surgeons in other countries do not have formal evaluation and recognition of pediatric training by a licensing body.

The earliest operations on the pericardium (the sac that surrounds the heart) took place in the 19th century and were performed by Francisco Romero (1801)[3] Dominique Jean Larrey, Henry Dalton, and Daniel Hale Williams.[4] The first surgery on the heart itself was performed by Norwegian surgeon Axel Cappelen on 4 September 1895 at Rikshospitalet in Kristiania, now Oslo. He ligated a bleeding coronary artery in a 24-year-old man who had been stabbed in the left axilla and was in deep shock upon arrival. Access was through a left thoracotomy. The patient awoke and seemed fine for 24 hours, but became ill with increasing temperature and he ultimately died from what the post mortem proved to be mediastinitis on the third postoperative day.[5][6] The first successful surgery of the heart, performed without any complications, was by Ludwig Rehn of Frankfurt, Germany, who repaired a stab wound to the right ventricle on September 7, 1896.[7][8]

Surgery in great vessels (aortic coarctation repair, Blalock-Taussig shunt creation, closure of patent ductus arteriosus) became common after the turn of the century and falls in the domain of cardiac surgery, but technically cannot be considered heart surgery. One of the more commonly known cardiac surgery procedures is the coronary artery bypass graft (CABG), also known as "bypass surgery." In this procedure, vessels from elsewhere in the patient's body are most commonly harvested using a procedure known as EVH, and grafted to the coronary arteries to bypass blockages and improve the blood supply to the heart muscle.

In 1925 operations on the heart valves were unknown. Henry Souttar operated successfully on a young woman with mitral stenosis. He made an opening in the appendage of the left atrium and inserted a finger into this chamber in order to palpate and explore the damaged mitral valve. The patient survived for several years[9] but Souttar's physician colleagues at that time decided the procedure was not justified and he could not continue.[10][11]

Cardiac surgery changed significantly after World War II. In 1948 four surgeons carried out successful operations for mitral stenosis resulting from rheumatic fever. Horace Smithy (1914–1948) of Charlotte, revived an operation due to Dr Dwight Harken of the Peter Bent Brigham Hospital using a punch to remove a portion of the mitral valve. Charles Bailey (1910–1993) at the Hahnemann Hospital, Philadelphia, Dwight Harken in Boston and Russell Brock at Guy's Hospital all adopted Souttar's method. All these men started work independently of each other, within a few months. This time Souttar's technique was widely adopted although there were modifications.[10][11]

In 1947 Thomas Holmes Sellors (1902–1987) of the Middlesex Hospital operated on a Fallot's Tetralogy patient with pulmonary stenosis and successfully divided the stenosed pulmonary valve. In 1948, Russell Brock, probably unaware of Sellor's work, used a specially designed dilator in three cases of pulmonary stenosis. Later in 1948 he designed a punch to resect the infundibular muscle stenosis which is often associated with Fallot's Tetralogy. Many thousands of these "blind" operations were performed until the introduction of heart bypass made direct surgery on valves possible.[10]

Open heart surgery is a procedure in which the patient's heart is opened and surgery is performed on the internal structures of the heart. It was discovered by Wilfred G. Bigelow of the University of Toronto that the repair of intracardiac pathologies was better done with a bloodless and motionless environment, which means that the heart should be stopped and drained of blood. The first successful intracardiac correction of a congenital heart defect using hypothermia was performed by C. Walton Lillehei and F. John Lewis at the University of Minnesota on September 2, 1952. The following year, Soviet surgeon Aleksandr Aleksandrovich Vishnevskiy conducted the first cardiac surgery under local anesthesia.

Surgeons realized the limitations of hypothermia – complex intracardiac repairs take more time and the patient needs blood flow to the body, particularly to the brain. The patient needs the function of the heart and lungs provided by an artificial method, hence the term cardiopulmonary bypass. John Heysham Gibbon at Jefferson Medical School in Philadelphia reported in 1953 the first successful use of extracorporeal circulation by means of an oxygenator, but he abandoned the method, disappointed by subsequent failures. In 1954 Lillehei realized a successful series of operations with the controlled cross-circulation technique in which the patient's mother or father was used as a 'heart-lung machine'. John W. Kirklin at the Mayo Clinic in Rochester, Minnesota started using a Gibbon type pump-oxygenator in a series of successful operations, and was soon followed by surgeons in various parts of the world.

Since the 1990s, surgeons have begun to perform "off-pump bypass surgery" – coronary artery bypass surgery without the aforementioned cardiopulmonary bypass. In these operations, the heart is beating during surgery, but is stabilized to provide an almost still work area in which to connect the conduit vessel that bypasses the blockage; in the U.S., most conduit vessels are harvested endoscopically, using a technique known as endoscopic vessel harvesting (EVH).

Some researchers believe that the off-pump approach results in fewer post-operative complications, such as postperfusion syndrome, and better overall results. Study results are controversial as of 2007, the surgeon's preference and hospital results still play a major role.

A new form of heart surgery that has grown in popularity is robot-assisted heart surgery. This is where a machine is used to perform surgery while being controlled by the heart surgeon. The main advantage to this is the size of the incision made in the patient. Instead of an incision being at least big enough for the surgeon to put his hands inside, it does not have to be bigger than 3 small holes for the robot's much smaller "hands" to get through.

Pediatric cardiovascular surgery is surgery of the heart of children.The first operations to repair heart defects in children were performed by Clarence Crafoord in Sweden when he repaired coarctation of the aorta in a 12-year-old boy.[14] The first attempts to palliate congenital heart disease were performed by Alfred Blalock with the assistance of William Longmire, Denton Cooley, and Blalock's experienced technician, Vivien Thomas in 1944 at Johns Hopkins Hospital.[15] Techniques for repair of congenital heart defects without the use of a bypass machine were developed in the late 1940s and early 1950s. Among them was an open repair of an atrial septal defect using hypothermia, inflow occlusion and direct vision in a 5-year old child performed in 1952 by Lewis and Tauffe. C. Walter Lillihei used cross-circulation between a boy and his father to maintain perfusion while performing a direct repair of a ventricular septal defect in a 4 year old child in 1954.[16] He continued to use cross-circulation and performed the first corrections of tetratology of Fallot and presented those results in 1955 at the American Surgical Association. In the long-run, pediatric cardiovascular surgery would rely on the cardiopulmonary bypass machine developed by Gibbon and Lillehei as noted above.

The development of cardiac surgery and cardiopulmonary bypass techniques has reduced the mortality rates of these surgeries to relatively low ranks. For instance, repairs of congenital heart defects are currently estimated to have 4–6% mortality rates.[17][18] A major concern with cardiac surgery is the incidence of neurological damage. Stroke occurs in 5% of all people undergoing cardiac surgery, and is higher in patients at risk for stroke.[19] A more subtle constellation of neurocognitive deficits attributed to cardiopulmonary bypass is known as postperfusion syndrome, sometimes called "pumphead". The symptoms of postperfusion syndrome were initially felt to be permanent,[20] but were shown to be transient with no permanent neurological impairment.[21]

In order to assess the performance of surgical units and individual surgeons, a popular risk model has been created called the EuroSCORE. This takes a number of health factors from a patient and using precalculated logistic regression coefficients attempts to give a percentage chance of survival to discharge. Within the UK this EuroSCORE was used to give a breakdown of all the centres for cardiothoracic surgery and to give some indication of whether the units and their individuals surgeons performed within an acceptable range. The results are available on the CQC website.[22] The precise methodology used has however not been published to date nor has the raw data on which the results are based.