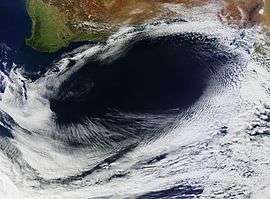 True color satellite image of an unusual anticyclone off southern Australia in the Southern Hemisphere, on September 8, 2012, showing a counter-clockwise rotation around an oval area of clear skies.

An anticyclone (that is, opposite to a cyclone) is a weather phenomenon defined by the United States National Weather Service's glossary as "a large-scale circulation of winds around a central region of high atmospheric pressure, clockwise in the Northern Hemisphere, counterclockwise in the Southern Hemisphere".[1] Effects of surface-based anticyclones include clearing skies as well as cooler, drier air. Fog can also form overnight within a region of higher pressure. Mid-tropospheric systems, such as the subtropical ridge, deflect tropical cyclones around their periphery and cause a temperature inversion inhibiting free convection near their center, building up surface-based haze under their base. Anticyclones aloft can form within warm core lows such as tropical cyclones, due to descending cool air from the backside of upper troughs such as polar highs, or from large scale sinking such as the subtropical ridge.

Surface anticyclones form due to downward motion through the troposphere, the atmospheric layer where weather occurs. Preferred areas within a synoptic flow pattern in higher levels of the troposphere are beneath the western side of troughs. On weather maps, these areas show converging winds (isotachs), also known as confluence, or converging height lines near or above the level of non-divergence, which is near the 500 hPa pressure surface about midway up the troposphere.[2][3] Because they weaken with height, these high-pressure systems are cold.

The subtropical ridge shows up as a large area of black (dryness) on this water vapor satellite image from September 2000.
Main article: Subtropical ridge

Heating of the earth near the equator forces upward motion and convection along the monsoon trough or intertropical convergence zone. The divergence over the near-equatorial trough leads to air rising and moving away from the equator aloft. As air moves towards the mid-latitudes, it cools and sinks leading to subsidence near the 30° parallel of both hemispheres. This circulation known as the Hadley cell forms the subtropical ridge.[4] Many of the world's deserts are caused by these climatological high-pressure areas.[5] Because these anticyclones strengthen with height, they are known as warm core ridges.

The development of anticyclones aloft occurs in warm core cyclones such as tropical cyclones when latent heat caused by the formation of clouds is released aloft increasing the air temperature; the resultant thickness of the atmospheric layer increases high pressure aloft which evacuates their outflow. 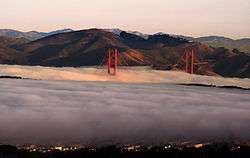 High-pressure systems are frequently associated with light winds at the surface and subsidence through the higher portion of the troposphere. Subsidence will generally dry out an air mass by adiabatic (compressional) heating.[8] Thus, high pressure typically brings clear skies.[9] Because no clouds are present to reflect sunlight during the day, there is more incoming shortwave solar radiation and temperatures rise. At night, the absence of clouds means that outgoing longwave radiation (i.e. heat energy from the surface) is not absorbed, giving cooler diurnal low temperatures in all seasons. When surface winds become light, the subsidence produced directly under a high-pressure system can lead to a buildup of particulates in urban areas under the ridge, leading to widespread haze.[10] If the low level relative humidity rises towards 100 percent overnight, fog can form.[11]

Strong but vertically shallow high-pressure systems moving from higher latitudes to lower latitudes in the northern hemisphere are associated with continental arctic air masses.[12] The low, sharp inversion can lead to areas of persistent stratocumulus or stratus cloud, colloquially known as anticyclonic gloom. The type of weather brought about by an anticyclone depends on its origin. For example, extensions of the Azores high pressure may bring about anticyclonic gloom during the winter because they are warmed at the base and trap moisture as they move over the warmer oceans. High pressures that build to the north and extend southwards often bring clear weather because they are cooled at the base (as opposed to warmed) which helps prevent clouds from forming.

Once arctic air moves over an unfrozen ocean, the air mass modifies greatly over the warmer water and takes on the character of a maritime air mass, which reduces the strength of the high-pressure system.[13] When extremely cold air moves over relatively warm oceans, polar lows can develop.[14] However, warm and moist (or maritime tropical) air masses which move poleward from tropical sources are slower to modify than arctic air masses.[15]

The circulation around mid-level ridges, and the subsidence at their center, act to steer tropical cyclones around their periphery. Due to the subsidence within this type of system, a cap can be set up which inhibits the development of free convection. This limits thunderstorm activity near their center and traps low-level pollutants such as ozone as haze under their base, which is a significant problem in large urban centers during summer months such as Los Angeles, California and Mexico City.

The existence of an upper level ridge allows upper level divergence which leads to surface convergence. If a capping mid-level ridge does not exist, this leads to free convection and the development of showers and thunderstorms if the lower atmosphere is humid. Because tropical cyclones strengthen these ridges, a positive feedback loop develops between the convective tropical cyclone and the upper level high, strengthening both systems. This loop stops once ocean temperatures under the system cool sufficiently, under 26.5 °C (79.7 °F),[16] which forces the thunderstorm activity to wane, which then weakens the upper level

On weather maps, high-pressure centers are associated with the letter H in English,[20] or A in Spanish[21] (for Spanish alta: high), within the isobar with the highest pressure value. On constant-pressure upper-level charts, anticyclones are located within the highest height line contour.[22]

On Jupiter, there are two examples of an extraterrestrial anticyclonic storm; the Great Red Spot and the recently formed Oval BA. They are powered by smaller storms merging[23] unlike any typical anticyclonic storm that happens on Earth where water powers them. Another theory is that warmer gases rise in a column of cold air, creating a vortex as is the case of other storms that include Anne's Spot on Saturn, and the Great Dark Spot on Neptune. Anticyclones have been detected near the poles of Venus.