Crawford County is a county located in the U.S. state of Pennsylvania. As of the 2010 census, the population was 88,765.[2] Its county seat is Meadville.[3] The county was created on March 12, 1800, from part of Allegheny County and named for Colonel William Crawford.[4] 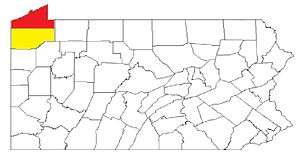 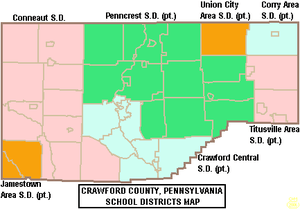 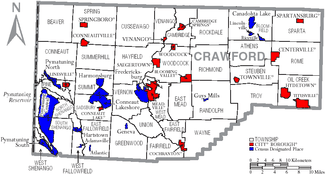 Under Pennsylvania law, there are four types of incorporated municipalities: cities, boroughs, townships, and, in at most two cases, towns. The following cities, boroughs and townships are located in Crawford County:

Census-designated places are geographical areas designated by the U.S. Census Bureau for the purposes of compiling demographic data. They are not actual jurisdictions under Pennsylvania law.

The population ranking of the following table is based on the 2010 census of Crawford County.[15]