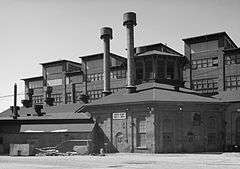 Cambria County is a county located in the U.S. state of Pennsylvania. As of the 2010 census, the population was 143,679.[2] Its county seat is Ebensburg.[3] The county was created on March 26, 1804, from parts of Bedford, Huntingdon, and Somerset Counties and later organized in 1807.[4] It was named for the nation of Wales.

Despite being overwhelmingly Democratic in registration and the Democrats holding all row offices, Cambria is a swing county in statewide elections, with all four statewide winners carrying it in 2008. Cambria County is one of Pennsylvania's most competitive counties. That is primarily due to its mixed urban-rural ratio. 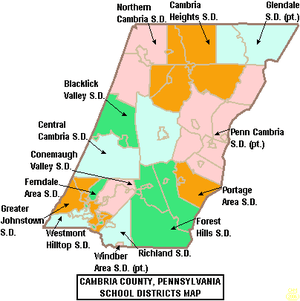 There are also 11 public,cyber charter schools in Pennsylvania that are available for free statewide, to children K-12. See: Education in Pennsylvania.

According to the Pennsylvania Department of Education's Ed Names and Addresses, July 1, 2015

There are two Pennsylvania state parks in Cambria County. 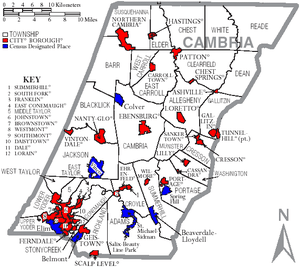 Under Pennsylvania law, there are four types of incorporated municipalities: cities, boroughs, townships, and, in at most two cases, towns. The following cities, boroughs and townships are located in Cambria County:

Census-designated places are geographical areas designated by the U.S. Census Bureau for the purposes of compiling demographic data. They are not actual jurisdictions under Pennsylvania law. Other unincorporated communities, such as villages, may be listed here as well.

The population ranking of the following table is based on the 2010 census of Cambria County.[13]