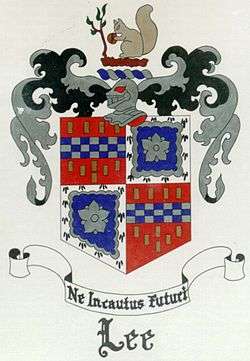 Dr. Arthur Lee (20 December 1740 – 12 December 1792) was a physician and opponent of slavery in colonial Virginia in North America who served as an American diplomat during the American Revolutionary War. He was educated in medicine and law at the University of Edinburgh and in London, respectively. After passing the bar, he practiced law in London for several years. He stayed in London during the Revolutionary War, representing the colonies to Britain and France and also serving as an American spy to track their activities. After his return to Virginia, he served as a delegate to the Continental Congress.

During the latter period, Lee wrote in 1764, "An Essay in Vindication of the Continental Colonies of America," one of his more noted works. He opposed the Townshend acts and became a major proponent of American resistance to the British.[6]

He studied law in London, passing the bar, and practising there from 1770 to 1776.[7] During this time in London, Lee wrote many influential pamphlets and essays opposing slavery[8] and British continental policies.

In 1770, Lee in London was named as the Massachusetts correspondent to Britain and France. He began corresponding with Samuel Adams, which began a long friendship. They probably did not meet personally until sometime after 1780. Lee met Benjamin Franklin while he was in London, where Franklin was negotiating on behalf of Pennsylvania interests. Lee criticized Franklin's extravagant lifestyle and told Sam Adams he would never be a good negotiator between a free people and a tyrant.

In May 1776, he was a guest at the dinner organized by James Boswell that brought together Samuel Johnson, an ardent opponent of the American colonists' cause, and John Wilkes, one of its most prominent British supporters.[9]

During the American Revolution, the Continental Congress appointed Lee as its envoy to Spain and Prussia, but his success was at best mixed.[6] Later, in Paris, after Lee helped negotiate the Treaty of Alliance (1778) with France, he fell out with Benjamin Franklin and Silas Deane. He persuaded Congress to recall Deane to America, but he was himself recalled soon afterward.[6]

In addition to his diplomatic duties, Lee was arguably one of America's first spies. He gathered information in France and Britain. He also successfully identified Edward Bancroft, secretary to the American legation in Paris, as a British spy.[7]

After Lee returned to Virginia, the state in 1782 sent him as a delegate to the Continental Congress.[7] The same year he was elected a Fellow of the American Academy of Arts and Sciences.[10]

In 1790, Arthur Lee purchased Lansdowne from Robert Wormeley III. This fine mansion still stands in Urbanna,[6] a small waterfront town on Virginia's Middle Peninsula. It is presently a private residence. Lee died in 1792 and was buried in the rear garden with no stone. He never married and had no children. Plans to reinter him at Stratford Hall never came about. Lansdowne was listed on the National Register of Historic Places in 1974.[11]

Arthur's paternal great-grandmother, Anne, was the daughter of Thomas Constable; she became a ward of Sir John Thoroughgood.