Bohlen was born in Clayton, New York, on August 30, 1904, to Celestine Eustis Bohlen, the daughter of James B. Eustis, a Senator from Louisiana and ambassador to France under Grover Cleveland and Charles Bohlen, a "gentleman of leisure." The second of three Bohlen children, he acquired an interest in foreign countries by traveling in Europe as a boy.[1]

He was thus was related to Alfried Krupp von Bohlen und Halbach, Germany's primary weapons maker during World War II. Krupp was indicted for war crimes at the Nuremberg tribunal, but illness prevented his prosecution.

In 1935, Bohlen married Avis Howard Thayer, born September 18, 1912 in Philadelphia, the daughter of George Thayer and Gertrude Wheeler.[2] The Avis Bohlen award was created and named for her in 1982. It is administered by the American Foreign Service Association and each year honors the US Foreign Service dependent who has done the most to advance US interests.[3]

Her brother, Charles Wheeler Thayer, also a diplomat, worked closely with his brother-in-law, Charles, as US vice-consul in Moscow.

Charles and Avis Bohlen had two daughters, Avis and Celestine, and a son, Charles Jr.[4] The younger Avis became a distinguished diplomat in her own right, who served as deputy chief of mission in Paris, US ambassador to Bulgaria, and US assistant secretary of state for arms control. The other daughter, Celestine, became a journalist and has been a Moscow-based reporter for The New York Times. 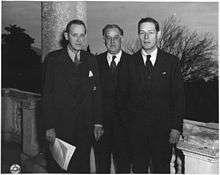 Bohlen joined the US Department of State in 1929, learned Russian, and became a Soviet specialist, working first in Riga, Latvia. In 1934, at 30, he joined the staff of the embassy in Moscow.

On the morning of August 24, 1939, he visited Hans von Herwarth and received the full content of the secret protocol to the Molotov-Ribbentrop Pact, signed only the day before[5] The secret protocol contained an understanding between Adolf Hitler and Joseph Stalin to split Central Europe, the Baltic States, and Finland between their nations. US President Franklin Roosevelt was urgently informed, but the US did not tell to any of the concerned governments in Europe.

A week later, the plan was realized by the German and Soviet invasions of Poland, and World War II started. 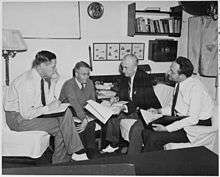 Secretary of State James F. Byrnes support consults with the advisors in preparation for Potsdam Conference in Germany.

In 1940 and 1941, he worked in the American embassy in Tokyo and was interned for six months before his release by the Japanese in mid-1942. He then worked on Soviet issues in the State Department during the war, accompanying Harry Hopkins on missions to Joseph Stalin in Moscow. He worked closely with Roosevelt and was Roosevelt's interpreter at the Tehran Conference (1943) and the Yalta Conference (1945).

Bohlen, criticized by some of the hawks in the US Congress, paid close attention to public opinion as he considered domestic influence in a democracy to be inevitable.[6] When George Marshall became Secretary of State in 1947, Bohlen became a key adviser to US President Harry Truman.

In 1946, he disagreed with his friend and mentor, Ambassador George F. Kennan, on to how to deal with the Soviets.[7] Kennan proposed a strategy of containment of Soviet expansion, but Bohlen was more cautious and recommended accommodation by allowing Stalin to have a sphere of influence in Eastern Europe without disturbance by the US.

Kennan, declared persona non grata for some criticism of the Soviet Union in Berlin in September 1952, would not be allowed to return to the country. Oversight of the embassy was then awarded Chargé d´Affaires Jacob Beam.

On 20 January 1953, Dwight Eisenhower became US president. When Stalin died in March 1953, the post of ambassador was still empty, and the embassy still being led by Beam.

In April 1953, Eisenhower named Bohlen as ambassador to the Soviet Union. He was confirmed 74-13 despite criticisms from Senator Joseph McCarthy, who had also criticized Bohlen's brother-in-law, also an affiliate of the US embassy in Moscow, Charles W. Thayer.

Bohlen proved unable to sustain good relationships with either Soviet leaders or with Secretary of State John Foster Dulles.. He was demoted on 18 April 1957 by Eisenhower after Dulles forced his resignation.

According to Kennedy advisor Theodore Sorensen, Bohlen participated in early discussions surrounding the Cuban Missile Crisis, inOctober 1962. However, to everyone's surprise he kept reservations aboard an ocean liner that would take him to his Paris post as ambassador rather than waiting until after the crisis had been resolved. He was thus absent for most of what was arguably the most important confrontation between the two superpowers during the Cold War period. He was a consultant in 1968 and 1969 to the transition at the State Department from Secretary of State Dean Rusk to President Richard Nixon's first Secretary of State, William P. Rogers.

Bohlen died of pancreatic cancer at his home in Washington, D.C. on January 1, 1974, at the age of 69. His funeral services, at Washington National Cathedral on January 4, 1974, were followed by burial at historic Laurel Hill Cemetery, Philadelphia.