The Mount Hypipamee Crater on the Atherton Tablelands.

The Atherton Tableland is a fertile plateau which is part of the Great Dividing Range in Queensland, Australia. It is located west to south-south-west inland from Cairns. Although it is in the tropical latitudes, its elevated position provides a climate suitable for dairy farming. It has an area of around 32,000 km2 with an altitude ranging between 500 and 1,280 m (1,640 and 4,200 ft).[1] The fertility of the soils in the region can be attributed to the volcanic origins of the land.

The principal river flowing across the plateau is the Barron River. It was dammed to form an irrigation reservoir named Lake Tinaroo. Tinaroo Hydro, a small 1.6MW Hydroelectric power station is located near the spillway.

Atherton was first explored by J.V. Mulligan in 1875. In 1877, John Atherton settled near the town which now bears his name. The area was originally explored for its mining potential where deposits of tin and gold were found.

Originally a pioneering pastoralist, John Atherton was the first to find tin deposits in Northern Queensland. Local legend has it that Tinaroo Creek received its name from Atherton who shouted, "Tin! Hurroo!" when he first made his discovery. Atherton and his friends, William Jack and John Newell, discovered the famous lode, which became the Great Northern Tin Mine. A rush of miners from the Hodgkinson’s Goldfields followed. The construction of a dray road through the Tableland brought a secondary rush, this time timber cutters to mine the red gold (redcedar) of the rainforest. Redcedar cutters camps were at Rocky Creek, Prior Pocket, Oonda Swamp (Carrington) & Ziggenbein’s Pocket. Although tin was a major part in the Tablelands, timber is what Atherton owes its existence to with large areas of red cedar, kauri, maple, black bean, walnut, white beech and red tulip oak being milled for buildings.

Before the town of Atherton developed, a full-blown Chinatown sprang into existence. The Chinese had moved from the Palmer River Goldfields to the Atherton area, where the big timber stands had been cleared to make way for farming. The Chinese were considered pioneers of agriculture in North Queensland as 80% of crop production on the Tablelands was grown by them and they played a vital role in opening up the area for settlement. After the crops, they turned to dairying. As the population of Chinatown increased, small shops appeared, wells were sunk to supply water, there were cooks, herbalists, doctors and merchants etc. The rough straw huts were replaced by sawn timber houses with verandahs and corrugated iron roofs. By 1909, Chinatown had become the largest concentration of Chinese on the Tablelands with a population on 1100. Today, the Hou Wang Temple remains as one of the few reminders of the former Chinese population of the Atherton Tablelands. 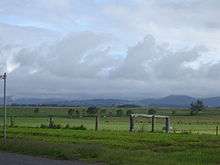 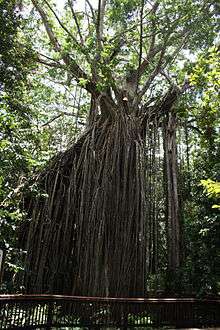 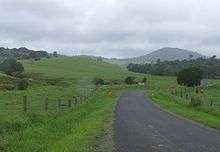 Country road to the Cathedral Fig Tree in the Atherton Tablelands

In the Second World War, Australian troops were camped around the district prior to being sent to the front and then again on their return. Many soldiers were interred at the war cemetery in Atherton.

Crops grown in and around Atherton include banana, sugarcane, corn/maize, avocados, strawberries, macadamia nuts and mangoes and citrus. Tobacco was also grown[2] until October 2006 (2006-10) when it was ended by a Government buyout.[3] Dairying, grazing and poultry are also present on the Tableland.

Tourism contributes to the Tableland economy, with Tinaroo Dam being the focal point. Yungaburra is also becoming a tourist destination with a number of restaurants and Bed and Breakfasts.

Atherton and Mareeba are the largest towns in the area. Herberton, Kairi, Kuranda, Malanda, Millaa Millaa, Tinaroo, Tolga, Yungaburra, Walkamin and Ravenshoe are also located on the Tablelands. 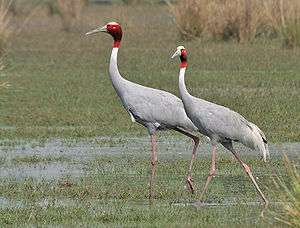 The area supports an important population of sarus cranes

The tableland contains several small remnants of the rainforest which once covered it, many of which are now protected in national parks. It is classified by BirdLife International as one of Australia's Important Bird Areas, supporting over 1% of the world population of the sarus crane and a significant population of the bush stone-curlew.[4] Twelve species of birds are endemic to this area and the mountain ranges immediately south: Atherton scrubwren, Bower's shrikethrush, bridled honeyeater, chowchilla, fernwren, golden bowerbird, grey-headed robin, Macleay's honeyeater, mountain thornbill, pied monarch, tooth-billed bowerbird and Victoria's riflebird. 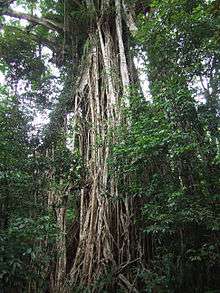 Cathedral Fig Tree. Located near Lake Barrine. Not to be confused with the Curtain Fig Tree at Yungaburra.