Augusta is a home rule-class city[1] in Bracken County, Kentucky, in the United States. It is sited upon the southern bank of the Ohio River. As of the 2010 census, the city population was 1,190.[2] When Bracken County was organized in 1796, Augusta was the county seat. In 1839, a new county courthouse was built at a more central location in Brooksville. The city was formally incorporated by the state assembly in 1850.[3]

The climate in this area is characterized by hot, humid summers and generally mild to cool winters. According to the Köppen Climate Classification system, Augusta has a humid subtropical climate, abbreviated "Cfa" on climate maps.[5]

There were 534 households out of which 28.8% had children under the age of 18 living with them, 43.4% were married couples living together, 14.6% had a female householder with no husband present, and 38.2% were non-families. 34.6% of all households were made up of individuals and 14.2% had someone living alone who was 65 years of age or older. The average household size was 2.25 and the average family size was 2.88.

Augusta was founded by Philip Buckner in 1786 as a trading post along the Ohio River. The city was named after Augusta County, Virginia. The city grew quickly and in 1796 became county seat of the new Bracken County. The county seat was moved to Oxford, then back to Augusta, then finally to Brooksville in 1839.

The city was home to five separate schools, one private and four public. The most famous built was the Augusta College, which served the entire Bracken area until 1887 when the high school was moved into that spot. The college continued to serve the city until October 31, 1896.

The city of Augusta is classified as a Class 4 city. Augusta is headed by the mayor and a City Council with six members and an attorney that preside at the meetings. After inauguration, the Mayor selects his Vice Mayor who remains in that post until the next mayor is elected. There is no limit to the number of terms either the Mayor or the City Council can serve.

Augusta is home to a Clopay Corporation manufacturing facility that makes plastic films.[9]

The public schools, Augusta Elementary School and Augusta High School, are managed by the Augusta Independent Schools school district. The district was founded in 1887. Lisa McCane is the Superintendent of Schools.[10]

Saint Augustine School is a Parochial Catholic School that houses PK-8 grade. The school was founded in 1865 by the Sisters of Notre Dame. 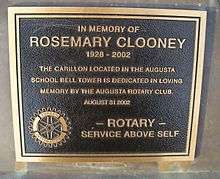 The high school carillon in Augusta is dedicated to Rosemary Clooney.