Maysville is a home rule-class city[1] in Mason County, Kentucky, United States and is the seat of Mason County.[2] The population was 9,011 at the 2010 census, making it the 40th-largest city in Kentucky by population. Maysville is on the Ohio River, 66 miles (106 km) northeast of Lexington. It is the principal city of the Maysville Micropolitan Statistical Area, which includes Mason and Lewis counties. Two bridges cross the Ohio from Maysville to Aberdeen, Ohio: the Simon Kenton Memorial Bridge built in 1931 and the William H. Harsha Bridge built in 2001.

On the edge of the outer Bluegrass Region, Maysville is historically important in Kentucky's settlement. Frontiersmen Simon Kenton and Daniel Boone are among the city's founders. Later, Maysville became an important port on the Ohio River for the northeastern part of the state. It exported bourbon whiskey, hemp and tobacco, the latter two produced mainly by African American slaves before the Civil War. It was once a center of wrought iron manufacture, sending ironwork downriver to decorate the buildings of Cincinnati, Ohio, and New Orleans, Louisiana.[3] Other small manufacturers also located early in Maysville and manufacturing remains an important part of the modern economy.[4] Under the leadership of Henry Means Walker, Maysville was home to one of the largest tobacco auction warehouses in the world for most of the 20th century.[5]

Maysville was an important stop on the Underground Railroad, as the free state of Ohio was just across the river.[6] abolitionist author Harriet Beecher Stowe visited the area in 1833 and watched a slave auction in front of the court house in Washington, the original seat of the county and now a historic district of Maysville.[7] She included the scene in her influential novel Uncle Tom's Cabin, published in 1852.

The annual Rosemary Clooney Music Festival was founded by the singer in 1999 to benefit the restoration of the Russell Theatre.[8] Past performers at the festival include Debby Boone, Rita Coolidge, Michael Feinstein, Roberta Flack, Alison Krauss, The Pointer Sisters, Michael Bolton, and Linda Ronstadt.[9] The Ledger Independent is the local newspaper and is published five days a week. WFTM-AM and WFTM-FM are the primary local radio stations in Maysville. The AM station plays adult standards, and the FM plays adult contemporary music. 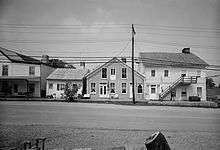 Buildings in the Washington Historic District

Buffalo once forded the Ohio here, beating a broad path into the interior of Kentucky in search of salt licks. For thousands of years, various cultures of indigenous peoples inhabited the area, hunting the buffalo and other game. In the 17th century, the powerful Iroquois Confederacy, based in present-day New York state, drove out other tribes to hold the Ohio Valley as a hunting ground.

European-American settlers' traveling down the Ohio in the 18th century and early 19th century found a natural harbor at Limestone Creek. The buffalo trace, also a well-used trail traveled for centuries by Native Americans, was a natural path into the bluegrass region, extending all the way to Lexington, Kentucky.[6][10] Frontiersman Simon Kenton made the first settlement in the area in 1775 but temporarily abandoned that to fight in the western battles of the American Revolution. Returning in 1784, Kenton built a blockhouse at the site of Maysville and founded Kenton's Station (frontier fort) at a site three miles (5 km) inland.[11][12] Kenton met new settlers at Limestone, as the landing place was called, and escorted them inland to his station. In 1786 the village which grew up near Kenton's Station was established by act of the Virginia General Assembly as the town of Washington.[13] By this time John May had acquired the land at Limestone and Daniel Boone established a trading post and tavern there. In 1787 the little settlement was incorporated as Maysville, though the name Limestone persisted well into the 19th century.[14] 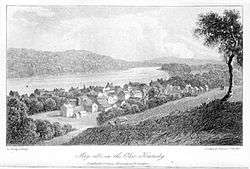 In 1788, when Mason County was organized and Washington was named its county seat, Maysville was still a rude collection of warehouses and wharves, with few dwellings. In 1795 the conclusion of the Northwest Indian War reduced the likelihood of Indian attacks from across the Ohio. Maysville began to flourish.[7] Zane's Trace, a road from Wheeling, Virginia (now West Virginia), to the bank of the Ohio River opposite Maysville, was completed in 1797 and stimulated ferry traffic across the river.[15] By 1807 Maysville was one of two principal ports in Kentucky; it was still mostly a place through which goods and people passed, having only about sixty dwellings.[16] In 1811 the first steamboat came down the Ohio from Pittsburgh, Pennsylvania, passing Maysville on its way to New Orleans.[17] With the coming of the steamboat, Maysville's population and area expanded rapidly.[4]

Southwest from Maysville, the road followed the former buffalo trace and Native American trail to Lexington. It was called both the Maysville Road and the Limestone Road. It was maintained by the various counties through which it passed with local labor from the county levies.[18] The road was rough and during certain seasons practically impassable.

In 1829 the Kentucky legislature authorized the Maysville, Washington, Paris, and Lexington Turnpike Road Company to construct a modern roadway along the route of the old Limestone Road. Users would be charged fees for maintenance and paying off the debt to shareholders. The act set aside blocks of shares for purchase by the federal government. Henry Clay, an influential Kentucky politician and proponent of the American System, argued for the Maysville Road and other infrastructure, noting it would be part of a longer road terminating in New Orleans, Louisiana, and proper for federal funding.[19]

In 1830, Congress passed a bill authorizing the federal government to purchase shares in the turnpike company. President Andrew Jackson, a bitter rival of Clay, vetoed the bill, arguing that the project was of purely local benefit. The Maysville Road veto was one of Jackson's first acts in aligning the federal government with his principles of Jacksonian democracy.[20]

An attempt to override Jackson's veto failed, but the controversy over the Maysville Road veto continued for some time. The turnpike was completed in 1835 with funding from local entities and private investment. It was the first macadamized road in the state.[21] Today it is U.S. Route 68.[7]

By the 1830s, Maysville had a population of 3,000 and was the second-most important commercial city in Kentucky after Louisville.[22] Washington, the county seat, had dwindled in importance after a fire in 1825 and a series of deadly cholera epidemics.[13][23] A proposal to move the county government from Washington to Maysville was bitterly fought but passed by a slender margin in 1848. Maysville donated its city hall, completed in 1846, to the county for a court house.[4][24] Today, much of Washington is designated as a historic district, the Washington Historic District; it is listed on the National Register of Historic Places.[25]

The Simon Kenton Memorial Bridge is a suspension bridge built in 1931 and originally opened with a toll. Those tolls were removed in 1945 to much fanfare - including celebrations from the local Rotary and Lions club, and a parade in downtown Maysville. It crosses the Ohio River. Its main span is 323 meters (1,060 feet) long, and the total length of the bridge is 607 meters (1,991 feet). It connects Maysville, Kentucky and Aberdeen, Ohio. It is currently in use and is not slated for demolition as the bridge was closed for refurbishment in 2001 after the William H. Harsha Bridge was completed.

The Russell Theatre, located on Third Street in Maysville, was the site of the world premiere of Rosemary Clooney's first film, The Stars Are Singing, in 1953.[28] The Russell Theatre is an atmospheric theatre, and featured a large rainbow that would light up before and after the showing of each movie. The theatre is now undergoing the second phase of a restoration project that began in 2008. Organizers plan to revive The Russell as a movie and film venue, with emphasis on themed movie marathons, classics, documentaries, art films and other movies not available at mainstream cinemas.[29] 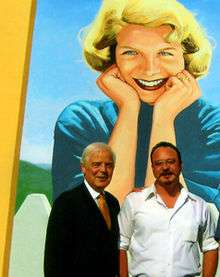 In the summer of 1998 a series of historical murals was begun on the downtown floodwall.[30] Over the next ten years Robert Dafford and his team painted ten murals exploring the history of Maysville on various sections of the floodwall.[31] 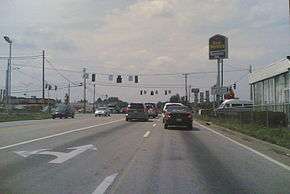 Maysville Transit provides fixed-route and demand-ride bus service throughout city of Maysville. The system is made up of a single fixed route that operates daily, running once an hour from 6:00 AM – 6:00 PM.[42] The city has been running the system since 1960.[43]

US 62 and 68 also provide Maysville with a direct route to Lexington and the Bluegrass Region of Central Kentucky.

Other highways serving Maysville are:

Routes 9 and 10 run concurrently through the south edge of Maysville as the AA HIghway. The AA Highway links the Kentucky suburbs of Cincinnati approximately 50 miles west of Maysville with Vanceburg, Ashland and Interstate 64 near Grayson to the southeast.

The fact that highways numbered 8, 9, 10, and 11 serve Maysville makes the city one of the few towns located at the intersection of four consecutively numbered highways.