For the city in Ethiopia of the same name, see Asaita.

The Sultanate of Aussa (alternate spelling: Awsa, also known as the Afar Sultanate) was a kingdom that existed in the Afar Region of eastern Ethiopia in the 18th and 19th centuries. It was considered to be the leading monarchy of the Afar people, to whom the other Afar rulers nominally acknowledged primacy.

The Sultanate was incorporated into Italian East Africa in 1936, and became part of Ethiopia in 1945, although nominal Sultans continued to be named under Ethiopian rule and the region continued to enjoy considerable autonomy within Ethiopia during the 1950s to 1970s.

Afar society has traditionally been divided into petty kingdoms, each ruled by its own Sultan.[1]

In 1647, the rulers of the Emirate of Harar broke away to form their own polity. The Imamate of Awsa was later destroyed by the local Mudaito Afar in 1672. Following the Awsa Imamate's demise, the Mudaito Afars founded their own kingdom, the Sultanate of Aussa. At some point after 1672, Aussa declined in conjunction with Imam Umar Din bin Adam's recorded ascension to the throne.[2] 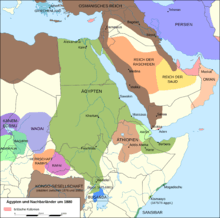 Map showing the location of the Aussa Sultanate circa 1880.

In 1734, the Afar leader Kedafu, head of the Mudaito clan, seized power and established the Mudaito Dynasty.[3][4] This marked the start of a new and more sophisticated polity that would last into the colonial period.[4] The primary symbol of the Sultan was a silver baton, which was considered to have magical properties.[5] The influence of the sultanate extended into the Denkel lowlands of what is now Eritrea.[6]

After 15 years of rule, Kedafu's son, Muhammäd Kedafu, succeeded him as Sultan. Muhammäd Kedafu three decades later bequeathed the throne to his own son, Ijdahis, who in turn would reign for another twenty-two years. According to Richard Pankhurst, these relatively long periods of rule by modern standards pointed to a certain degree of political stability within the state.[4]

Sultan Mahammad ibn Hanfadhe defeated and killed Werner Munzinger in 1875, who was leading an Egyptian army into Ethiopia.[7]

In 1865, the newly unified Italy bought Asseb from a local Sultan (which became the colony of Eritrea in 1890), and led Sultan Mahammad to sign several treaties with that country. As a result, the Ethiopian Emperor Menelik II stationed an army near Aussa to "make sure the Sultan of Awsa would not honor his promise of full cooperation with Italy" during the First Italo–Ethiopian War.[8]

During the Second Italian-Ethiopian War, the Sultan Mahammad Yayyo (grand son of Mohammed Hanfade illalta) agreed to cooperate with the Italian invaders.[9] As a result, in 1943 the reinstalled Ethiopian government sent a military expedition that captured Sultan Muhammad Yayo and made one of his relatives Sultan.[10]

In 1975, Sultan Alimirah Hanfere was exiled to Saudi Arabia, but returned after the fall of the Derg regime in 1991.

Sultan Alimirah often came into conflict with the central government over its encroachment on the authority of the Sultanate. Aussa, which had been more-or-less self-governing until the Sultan's ascension in 1944, had been greatly weakened in power by the centralising forces of Haile Selassie's government. In 1950 he withdrew from Asaita for two years in opposition, returning only two after following mediation by Fitawrari Yayyo.[11] The Sultan sought to unite the Afar people under an autonomous Sultanate, while remaining part of Ethiopia; they had been divided amongst the provinces of Hararghe, Shewa, Tigray, and Wollo.[12]

In 1961, when it was clear the Eritrean federal arrangement was headed towards its demise, 55 Afar chieftains in Eritrea met and endorsed the idea of an Ethiopian Afar autonomy. Following the dissolution of Eritrea's federal government and its transformation into a centrally-administered province, Afar leaders met again in Assab in 1963 and supported the creation of an autonomous region. In 1964 Afar leaders went to Addis Ababa to present Haile Selassie with their proposal, but the effort came up empty-handed.[12] Despite these encroachments and conflicts, the Sultan remained fundamentally loyal to the Emperor and Ethiopia; in turn, while he did not achieve the autonomous sultanate he desired, he enjoyed an appreciable level of autonomy in the areas of the Sultanate, almost unique amongst the many petty kingdoms incorporated into the Ethiopian state in the late 19th century. For example, while the government appointed a governor to the awrajja (district) of Aussa proper, the governor, rather than taking up residence in the capital of Asaita, instead sat in Bati, which was outside the district entirely.[13]

Upon Alimirah Hanfere's death in 2011, his son Hanfere Alimirah was named his successor as sultan.[14]