For the modern day region, see Tigray Region. For other uses of Tigray, see Tigray.

Provinces of Ethiopia prior to 1995

Tigray was a province of the Ethiopian Empire and of the PDRE until 1995. Known by its French spelling Tigré into the 20th century,[1] its governors were powerful rulers in their own right and it was sometimes accorded the status of a separate kingdom. It gradually absorbed its neighboring provinces, including Semien, Tembien, Agame, and Enderta province and was superseded by the Tigray Region following the adoption of the 1995 constitution.

The historic flag of Tigray

Mountains of Lemalimo near Inda Selassie in western Tigray

Proto-Tigrayan-Tigrinyans and Proto-Amharas, also known as Habeshas, were the main ethnicity of Kingdom of Aksum in the first millennium CE. Their language, a form of Ge'ez, remained the language of the later Ethiopian imperial court as well as the Ethiopian Church.

In the 14th century the Tigrinya-speaking lands (Tigray-Mereb Melash) were divided into two provinces, separated by the Mereb River by the newly enthroned Amhara Emperors. The governor of the northern province received the title Baher Neagsh (Ruler of the sea), whereas the governor of the southern province was given the title of Tigray Mekonen (Lord of Tigray). The Portuguese Jesuit, Emanuele Baradas' work titled "Do reino de Tigr" and written in 1633-34 states that the "reino de Tigr" extended from Hamasien to Enderta, from the borders of Dankel to the Tekeze. He remarked that Tigray extended to the watershed of Semien although the political power of the Tigray Mekonen did not extend beyond the Tekeze. He also stated that Tigray-Mereb Melash was divided into twenty-four smaller political units (principalities), twelve of which were located south of the Mereb and governed by the Tigray Mekonen based in Enderta.[2] The other twelve were located north of the Mereb under the authority of the Baher Negash, based in the district of Serae.[2]

The Book of Aksum, written and compiled probably before the 15th century, shows a traditional schematic map of Tigray with the city of Aksum at its center surrounded by the 13 principal provinces: "Tembien, Shire, Serae, Hamasien, Bur, Sam’a, Agame, Amba Senayt, Garalta, Enderta, Sahart and Abergele."[3]

A typical landscape of Tigray, near the archaeological site of Yeha

During the Middle Ages the position of Tigray Mekonnen ("Governor of Tigray") was established to rule over the area. Other districts included Akkele Guzay (now part of Eritrea), and the kingdom of the Bahr negus, who ruled much of what is now Eritrea and Shire district and town in Western Tigray. At the time when Tigray Meknonnen existed simultaneously with that of Bahr negus, their frontier seems to have been the Mareb River, which is currently constitutes the border between the Ethiopian province of Tigray and Eritrea. 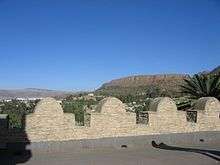 After the loss of power of the Bahr negus in the aftermath of Bahr negus Yeshaq's rebellions, the title of Tigray mekonnen gained power in relation to the Bahr negus and at times included ruling over parts of what is now Eritrea, especially in the 19th century.[4] By the unsettled Zemene Mesafint period ("Era of the Princes"), both titles had sunken to little more than empty titles, and the lord who in his turn dominated the region, used (and received from Emperor) the title of either Ras or Dejazmach, beginning with Ras Mikael Sehul. Rulers of Tigray such as Ras Wolde Selassie alternated with others, chiefly those of Begemder or Yejju, as warlords to rule in fact the Ethiopian monarchy during the Zemene Mesafint.

In the mid-19th century, the lords of Tembien and Enderta managed to create an overlordship of Tigray to their dynasty. One of its members, Dejazmach Kassai Mercha, ascended the imperial throne in 1872 under the name Yohannes IV. Following his death in the Battle of Metemma, the Ethiopian throne came under control of the king of Shewa, and the center of power shifted south and away from Tigray.