The Zagwe dynasty (ዛጉዌ) was a historical kingdom in present-day northern Ethiopia. Centered at Lalibela, it ruled large parts of the territory from approximately 900 to 1270, when the last Zagwe King Za-Ilmaknun was killed in battle by the forces of Yekuno Amlak. The name of the dynasty is thought to derive from the Ge'ez phrase Ze-Agaw, meaning "Dynasty of the Agaw" in reference to the Agaw people that constituted its ruling class.[1] Zagwe's best-known King was Gebre Mesqel Lalibela, who is credited with having constructed the rock-hewn churches of Lalibela.

David Buxton has stated that the area under the direct rule of the Zagwe kings "probably embraced the highlands of modern Eritrea and the whole of Tigray, extending southwards to Waag, Lasta and Damot (Wallo province) and thence westwards towards Lake Tana (Beghemdir)."[2] Unlike the practice of later rulers of Ethiopia, Taddesse Tamrat argues that under the Zagwe dynasty the order of succession was that of brother succeeding brother as king, based on the Agaw laws of inheritance. 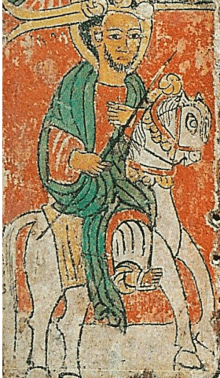 15th century icon of Gebre Mesqel Lalibela, the 12th century Zagwe dynasty King who is credited with having constructed the rock-hewn churches of Lalibela.

Around 960, Queen Gudit destroyed the remnants of the Kingdom of Aksum, causing a shift in its temporal power centre that later regrouped more to the south. For 40 years she ruled over what remained of the kingdom, eventually passing on the throne to her descendants. According to other Ethiopian traditional accounts, the last of her dynasty was overthrown by Mara Takla Haymanot in 1137. He married a daughter of the last king of Aksum, Dil Na'od, putting control of Ethiopia in Agaw hands. Since he married Emperor Dil Na'od's daughter, who was a member of the Solomonic Dynasty, the Zagwes are technically part of the Solomonic lineage. Emperor Mara Tekla Haymanot's marriage and off-spring thereof makes him the only Emperor without known ties to the Biblical King Solomon and Makeda, the Queen of Sheba (although his own ancestry is unknown).

The Zagwe period is still shrouded in mystery; even the number of kings in this dynasty is disputed. Some sources (such as the Paris Chronicle, and manuscripts Bruce 88, 91, and 93) give the names of eleven kings who ruled for 354 years; others (among them the book Pedro Páez and Manuel de Almeida saw at Axum) list only five who ruled 143.[3] Paul B. Henze reports the existence of at least one list containing 16 names.[4]

According to Carlo Conti Rossini, the shorter length of this dynasty was the more likely one. He argues that a letter received by the Patriarch of Alexandria John V shortly before 1150 from an unnamed Ethiopian monarch, in which the Patriarch is asked for a new abuna because the current office holder was too old, was from Mara Takla Haymanot, who wanted the abuna replaced because he would not endorse the new dynasty.[5]

The mystery of the Zagwe dynasty is perhaps darkest around its replacement by the revived Solomonic dynasty under Yekuno Amlak. The name of the last Zagwe king is lost—the surviving chronicles and oral traditions give his name as Za-Ilmaknun, which is clearly a pseudonym (Taddesse Tamrat translates it as "The Unknown, the hidden one"), employed soon after his reign by the victorious Solomonic rulers in an act of damnatio memoriae. Taddesse Tamrat believes that this last ruler was actually Yetbarak. The end of the Zagwe came when Yekuno Amlak, who proclaimed himself the descendant and rightful heir of Dil Na'od, and acting under the guidance of either Saint Tekle Haymanot or Saint Iyasus Mo'a, pursued the last king of the Zagwe and killed him at the church of St. Qirqos in Gaynt on the north side of the Bashilo River.[6]