The Bureau of Indian Affairs Police, usually known as the BIA Police, is the law enforcement arm of the United States Bureau of Indian Affairs which polices Indian tribes and reservations that do not have their own police force, and oversees other tribal police organizations. BIA Police services are provided through the Office of Justice Services Division of Law Enforcement.[1]

A BIA Police Officer is a federal police officer who enforces federal law relating to Indian Country, including Title 16, Title 18, and Title 21 of the United States Code, as well as the Code of Federal Regulations. The BIA has nationwide jurisdiction to enforce federal law relating to crimes committed within or involving Indian Country and officers are usually found near the various Indian reservations. BIA Police Officers may enforce tribal law if the tribe consents by deputizing the BIA and its officers. In some cases, BIA Police Officers are granted authority to enforce tribal law by tribal ordinance or statute. They may also be granted authority to enforce state laws by state statute.

The BIA has hiring preferences for Native Americans,[2][3] but will hire nonmembers who have the proper qualifications or educational requirements.[3]

The Division of Operations consists of six regional Districts with 208 Bureau and tribal law enforcement programs employing 3,000 police officers. Of the 208 programs, 43 are operated by the Bureau of Indian Affairs.

Along with providing direct oversight of Bureau programs, the operations division also provides technical assistance and some oversight to law enforcement programs contracted or compacted by tribes under Self-Determination and Self-Government Policy. 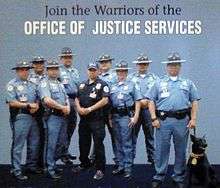 The BIA Police Officers (Series 0083) respond to calls concerning felonies and misdemeanors under Federal, State, local and tribal laws, they Investigate, apprehend, arrest, and detain all persons charged with violation of Title 18 of the United States Code.

They respond to calls concerning emergencies such as traffic accidents, domestic violence and disorderly conduct. They maintain law and order within the area of assignments by patrolling in a patrol vehicle, investigating suspicious situations, and taking action as appropriate. They perform such assignments as working radar on busy highways, participating in night surveillance in high crime areas, and participating in traffic and crowd control activities. They make arrests in cases of crime or misdemeanors which they personally witnessed; they take persons arrested to appropriate authorities for booking or formal charging.

BIA Officers also enforce all laws and regulations within his/her authority related to possession, use, distribution, trafficking and manufacturing of controlled substances.

BIA Police serve federal, state, or local or tribal warrants, subpoenas and other court papers; testifies at hearings and trials as an expert witness in federal, state, local or tribal courts as required; and prepares and submits reports of incidents or traffic accidents, daily and weekly activities, and narratives and statistical reports as required. 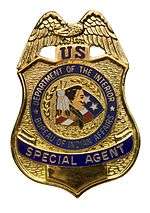 Salaries for Police Officers begin at the GS-3/4/5/6/7/8 level. After gaining experience in the field, some Police Officers may decide to advance their careers and apply for management/Special Agent positions. These positions are located in various Agency Offices, and would include Chief of Police positions. The management/Special Agent/Chief of Police selection process is competitive and can provide advancement to the GS-9 through GS-12 levels.[5]

Salaries for Special Agents can begin at the GS-7/9/11 level, or the GS-9/11/12 level, depending upon which positions are available. Special Agents receive an additional 25% in availability pay. After gaining experience in the field, some Special Agents may decide to advance their careers and apply for management positions. These positions are located in various District Offices, Central Office, and in some cases, at the agency level. The management selection process is competitive and can provide advancement to the GS-13, GS-14, and GS-15 levels.[4]