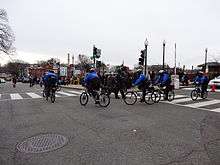 The United States Capitol Police (USCP) is a federal law enforcement agency charged with protecting the United States Congress within the District of Columbia and throughout the United States and its territories. The USCP are one of the few federal police forces responsible to the legislative branch of the U.S. government.

The United States Capitol Police has the primary responsibility for protecting life and property; preventing, detecting, and investigating criminal acts; and enforcing traffic regulations throughout a large complex of congressional buildings, parks, and thoroughfares. The Capitol Police has exclusive jurisdiction within all buildings and grounds of the United States Capitol complex as well as the Library of Congress. They also have concurrent jurisdiction with other law enforcement agencies, including the United States Park Police and the Metropolitan Police Department of the District of Columbia, in an area of approximately 200 blocks around the complex. Officers also have jurisdiction throughout the District of Columbia to take enforcement action when they observe or are made aware of crimes of violence while on official duties. Additionally, they are charged with the protection of members of Congress, officers of Congress, and their families throughout the entire United States, its territories and possessions, and the District of Columbia. While performing protective functions, the Capitol Police have jurisdiction throughout the entire United States.[1]

The U.S. Capitol Police is one of many agencies that sends its recruits to the Federal Law Enforcement Training Center (F.L.E.T.C.), located in Glynco, GA for initial training. Rarely, recruits are sent to the FLETC location in Artesia, NM. Following 12 weeks at FLETC, recruits return to FLETC's location in Cheltenham, MD for an additional 13 weeks of training. Following the recruits' academy training, graduates are sworn in as law enforcement officers and assigned to one of four divisions to begin their careers. Once assigned, officers are assigned a Field Training Officer (FTO) for a definite period to provide additional on-the-job training. FTO's provide weekly updates on the subjects that have been learned and issue tests to the new officers. Officers are also subject to a one-year probationary period. Initial salary at the start of training is $55,653.00, with an increase to $57,604.00 after graduation. After 30 months of satisfactory performance and promotion to Private First Class (PFC), salary is increased to $64,590.00.[2]

The history of the United States Capitol Police dates back to 1801 when Congress moved from Philadelphia to the newly constructed Capitol Building in Washington, D.C. At the time, Congress appointed one lone watchman to protect the building and Congressional property. Created by Congress in 1828 following the assault on a son of John Quincy Adams in the Capitol rotunda, the original duty of the United States Capitol Police was to provide security for the United States Capitol.[3] Its mission has expanded to provide the Congressional community and its visitors with a variety of security services. These services are provided through the use of a variety of specialty support units, a network of foot and vehicular patrols, fixed posts, a full-time Containment and Emergency Response Team (CERT), K-9, a Patrol/Mobile Response Division and a full-time Hazardous Devices and Hazardous Materials Sections.[4][5] The Library of Congress Police were merged into the force in 2003.[6] The agency has 1,800 sworn personnel.

One USCP officer, Sergeant Christopher Eney, was killed in a training accident in 1984.

Two USCP officers have been killed in the line of duty. A mentally disturbed gunman named Russell Eugene Weston, Jr., killed Officer Jacob Chestnut and Detective John Gibson in a shootout on July 24, 1998. Chestnut and Gibson were laid in honor in the Rotunda before burial in Arlington National Cemetery. (Chestnut was the first African American ever to lie in honor in the Rotunda.)