As of April 4, 2016, Appalachian State has 3 NCAA team national championships.[9]

The Mountaineers got off to a fast start in 2007 with perhaps the biggest win in program history with a road upset of the fifth-ranked Michigan Wolverines, 34–32, on September 1, 2007. With the win Appalachian became the first ever FCS (I-AA) team to defeat an AP nationally ranked FBS (I-A) team. This victory was seen by some analysts to be one of the greatest upsets in NCAA football history.[10][11][12][13][14] Following the win, they were featured on the cover of the following week's issue of Sports Illustrated.[15]

The Apps' head coaching position is occupied by Jim Fox currently. Notable past coaches include Press Maravich and Bobby Cremins. The Mountaineers have appeared in the NCAA Tournament twice, 1979 and 2000, and appeared in the National Invitation Tournament in 2007. The Apps play home basketball games at the George M. Holmes Convocation Center which opened in 2000 to replace Varsity Gymnasium.

The Appalachian State women's basketball team, coached by Angel Elderkin, was one of the top teams in the Southern Conference, laying claim to six tournament championships in an admittedly shorter span than their male counterparts. On February 19, 2011, the Appalachian State Mountaineer Women's Basketball Team won the 2011 Southern Conference regular season title, the last time they had won the title was 1996.

The Mountaineers wrestling team is coached by JohnMark Bentley and holds their home matches in Varsity Gymnasium. Notable former Mountaineer wrestlers include former Olympians, Al Crawford (1948), Herb Singerman (1968), Ike Anderson (1988 and 1992), and Dale Oliver (1988). Wrestling will continue to participate in the Southern Conference in wrestling as the Sun Belt Conference does not sponsor wrestling.

Appalachian's first baseball team took the field in 1903. The Mountaineers are coached by Billy Jones. The Mountaineers won regular season conference titles in 1973, 1984, 1985, 1986, 1987, and 2012. They also won the Southern Conference Baseball Tournament in 1984 and most recently on May 18, 2012, the Appalachian State Baseball team beat Western Carolina University, becoming Southern Conference baseball champs.

The women's field hockey team were members of the single-sport Northern Pacific Field Hockey Conference (NorPac) until that league's demise after the 2014 season, but currently compete as a Division I independent, as the Sun Belt does not sponsor this sport. The Mountaineers will join the Mid-American Conference as an affiliate starting in 2017.

Audio and video of games and events can be accessed at the internet home of Appalachian State Mountaineers athletics.

The Appalachian IMG Sports Network is a network of radio stations that can be heard across seven states in the southeast United States. 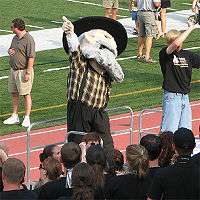 Yosef is the mascot for Appalachian State. The origin of the name Yosef comes from mountain talk for "yourself", the idea being that if you are a fan, friend or alumnus and have a heart of black and gold, you are Yosef.[18] Yosef first appeared in the 1942 edition of The Rhododendron, Appalachian's annual yearbook. He was presented as a member of the freshman class with the name Dan'l Boone Yoseff from Appalachian. The second "f" was dropped from Yoseff in January 1947.[18] Since his inception, Yosef has gone through many appearance changes with the current design being adopted prior to the 1983–84-year. The 2006 football season saw the return of Yosef's rifle which was fired after every Appalachian touchdown.