The Eastern Michigan Eagles, formerly known as the Hurons, are the athletic teams for Eastern Michigan University in Ypsilanti, Michigan, United States. The Eagles compete in the National Collegiate Athletic Association (NCAA) at the Division I level as members of the Mid-American Conference (MAC). The only exception is the women's rowing program, which is a member of the Colonial Athletic Association. Altogether, the Eagles have won three NCAA Division II national championships and 13 NAIA Division I national championships in five different sports (baseball, men's cross country, men's swimming and diving, men's indoor track and field, and men's outdoor track and field); moreover, EMU has been NCAA Division I national runner-up twice. In 1940, the men's cross country team finished second to Indiana University at the national meet hosted by Michigan State University.

The Eagles have also won the Reese Trophy, given to the best overall men's athletic program in the MAC, four times, most recently in 2008.[2] EMU was a member of the Illinois Intercollegiate Athletic Conference from 1950 to 1961, and has been a member of the MAC since 1972.

The university was founded in 1849 as Michigan State Normal School. It wasn't until the school was Michigan State Normal College when the school's first nicknames (then Michigan State Normal College), were the "Normalites" and "Men from Ypsi". The "Hurons" first came into being as the result of a contest sponsored by the Men's Union in 1929. On Oct. 31 of that year, a three-person committee, composed of Dr. Clyde Ford, Dr. Elmer Lyman and Professor Bert Peet, selected the name "Hurons" from the many entries in the contest. The name was submitted by two students, Gretchen Borst and George Hanner. The runner-up name in that contest was Pioneers. The "Hurons" was adopted in 1929. EMU was a member of the Illinois Intercollegiate Athletic Conference from 1950 to 1961, and eventually joined the Mid-American Conference in 1972. The university switched from NCAA Division II to NCAA Division I athletics in the mid-1970s. Since the 1991 season, Eastern Michigan University athletic teams have gone by the nickname "Eagles."

EMU football made two appearances in NCAA (football) bowl games in 1971 Pioneer Bowl and winning in the 1987 California Bowl.[4] Eastern's men's basketball team has appeared in four NCAA Division I tournaments. They reached the Sweet Sixteen in the 1991 and in 1996. As well, men's basketball reached the Final Four of the 1972 NCAA College Division National Championship and were national runners up in 1976.

EMU began investigating the appropriateness of its Huron Indian logo after the Michigan Department of Civil Rights issued a report in October 1988 suggesting that all schools using such logos drop them. The report indicated that the use of Native American names, logos or mascots for athletic teams promoted racial stereotypes. At that time, four colleges, 62 high schools and 33 junior high/middle schools in Michigan used Native American logos or names, including Mid-American Conference rival Central Michigan University. CMU did not, however, change their nickname from the Chippewas. The EMU Board of Regents voted to replace the Huron name with Eagles, taken from three recommendations from a committee charged with supplying a new nickname. The other two final names submitted were Green Hornets and Express. The Eagles name was officially adopted on May 22, 1991, when the EMU Board of Regents voted to replace the existing Huron nickname and logo with the new one. During the 1991 NCAA Men's Division I Basketball Tournament, announcer Jim Nantz talked about the controversy and referred to the team on-air as the "No-Names."

Some former students and faculty were angered that a unique name like Huron was replaced by something common like Eagles, especially for reasons of political correctness relating to Native American names, logos or mascots depicting a Native American. Early French explorers referred to these natives as the Huron, either from the French huron ("ruffian", "rustic"), or from hure ("boar's head"). According to tradition, French sailors thought that the bristly hairstyle of Wendat warriors resembled that of a boar.[5] But these negative etymological meanings conflict with the "bon Iroquois" attitude held by the French fur traders and explorers. An alternate etymology is from the Algonquin words ronon ("nation"), or Irri-ronon ("Erie" or "Cat Nation"). It was pronounced Hirri-ronon by the French, eventually shortened to Hirr-on, and finally spelled in its present form, Huron. Other etymological possibilities come from the Algonquin words ka-ron and tu-ron ("straight coast" and "crooked coast").[6]

Some alumni have refused to donate money to the school. The name change spurred an official chapter of the EMU Alumni Association, the Huron Restoration Chapter. The chapter claims to have the support of Chief Leaford Bearskin of the Wyandot Tribe of Oklahoma and former Grand Chief Max Gros-Louis of the Huron-Wendat Nation of Quebec to reestablish the team name as Huron.[7] Since the change, the university has not altered the name and has continued to adopt the Eagle name. In 1994, the university adopted a new mascot called "Swoop".[8] In 2011, EMU began its True EMU Campaign which aimed to unite all alumni stating "Whether you are a Huron or an Eagle, whether you graduated 50 years ago or last semester, we want you to show the world you remember your times in Y-Town, water tower and all."[9]

The Eastern Michigan University Marching Band, nicknamed "The Pride of the Peninsula," was first formed in 1924.

The Eastern Michigan University Basketball Band is directed by the two graduate assistants of the band. Unlike the marching band which is made up of all brass and woodwinds, the Basketball Band's instrumentation is strictly "Brass and Sax." The Basketball Band travels with the basketball teams during the MAC tournament or the NCAA tournament.

On June 19, 1976, after finishing in sixth place the year before, the baseball team was defeated by the University of Arizona in the final game of the College World Series at Johnny Rosenblatt Stadium in Omaha, Nebraska. Under the leadership of Coach Ron Oestrike and assistant Roger Coryell, the Hurons defeated Maine, Clemson, and Arizona State (with its 13 future Major Leaguers) before losing its last two games to Arizona. EMU was led by stars Bob Owchinko, Bob Welch, Dan Schmitz, Jerry Keller, Glenn Gulliver, Glen Ambrose, Mike Lauerman, Thom Boutin and John Martin (baseball).

Eastern's men's basketball team has appeared in four NCAA Division I tournaments, and have a 3-4 record, tied for third best among Michigan colleges. They reached the Sweet Sixteen in the 1991 tournament (their first ever appearance) and defeated Duke University in the first round of the 1996 tournament.

One of the great highlights in team history came after the victory over Duke in 1996 when the Blue Devils' Head Coach Mike Krzyzewski stated, "Eastern Michigan is very well coached, much deeper than we are and, today, much quicker than we were."[17]

EMU reached the Final Four of the 1972 NCAA College Division National Championship, led by All-American George Gervin, an NBA Hall of Famer selected as one of the 50 Greatest Players in NBA History. In 1976, the Baseball team was national runners up in NCAA Division I. 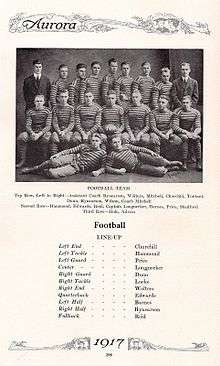 The greatest football victory in EMU history occurred in December 1987. The MAC Champion Hurons defeated 17½ point favorite San Jose State in the California Bowl. The victory culminated a 10-2 season and improbable rise from the depths of Division I-A college football. Only two years previous the team was in serious jeopardy of losing Division 1-A status. Head Coach Jim Harkema was instrumental in resurrecting the program. The two losses in 1987 were both on the road, and were by a total of 11 points.

The 1988 and 1989 teams each finished in second place in the conference and ended the most successful stretch of football in school history with its fourth straight winning season. EMU has achieved only one winning season ('95) since.

The team consists of 20 girls who all do different routines, skills, and compete at all different levels scoring. They all work together as a team and compete for themselves as well as each other to get the highest scores possible from the 4-8 judges on each event. There are ten to eleven meets per season and are every weekend from the end of January to the end of March. On average there are three to four home meets per season the rest being away meets that can be anywhere from Ohio to California.

The team has ranked repeatedly within the top 15 for team GPA in the nation.[21] In 2008, the Eagles had 11 gymnasts named to the National Association of Collegiate Gymnastics Coaches/Women (NACGC/W) scholar-athlete team. Additionally, the team placed seventh as a team with a Mid-American Conference leading 3.5357 team GPA for the ninth consecutive year. In 2007, the team gained its first MAC title and in 2008 were runners up.[22]

Women's swimming and diving is one of EMU's more successful women's sports. Women's Swimming and Diving team won MAC titles in 2006 and 2007.

The head coach Peter Linn has been leading the Eagles for 27 years.

Eastern Michigan Eagles wrestling team is a men's athletic program. Eastern Michigan adopted the sport of wrestling in 1956. The wrestling program was part of the National Association of Intercollegiate Athletics (NAIA) from 1957 through 1962. In 1963-1966, EMU wrestling switched conferences to the Presidents' Athletic Conference (PAC). Since the exit from the PAC, EMU has been a part of the Mid-American Conference (MAC), starting in 1973. Home meets are held in Bowen Field House.[25] In 1996, wrestling won its first MAC championship. There are several home dual meets a year and an annually host of the EMU Open. The EMU Open is an annual event started in 1991 that hosts over 500 wrestlers and NCAA schools across all three divisions.[26] The current head coach of the EMU wrestling team is David Bolyard. Bolyard became the new head wrestling coach in 2014. The team has 6 NAIA All-Americans,[27] 5 NCAA Division II All-Americans,[28] and 4 NCAA Division I All-Americans.[29] As well, the team has over 20 MAC champions.[30]

The men's hockey team[32] play in the Great Lakes Collegiate Hockey League (GLCHL) of the American Collegiate Hockey Association (ACHA) in the Division 1 level. The Eastern Michigan Eagles hockey team began play in 1976. In the first 33 years of existence the Eagle's played in the Central States Collegiate Hockey League (CSCHL) before switching to the newly formed GLCHL at the start of the 2010-2011 season. In 2003, the team was suspended for hazing from the 2004-05 season until 2007.[33] The team were national runners-up in 2000 and 1994 in the ACHA Division I league.

EMU has had over 20 students who competed in the Olympic Games. The earliest being Lloyd Olds, in 1932. The most recent being 2012 with Eric Alejandro and Jamie Nieto