Bancroft Roman Villa is a Roman villa in the Bancroft district of Milton Keynes in Buckinghamshire, England. Originally a winged-corridor house, the villa eventually became a grand building with mosaics and a formal garden. The principal rooms have been marked out in Bancroft Park and the fish-pond has been reconstructed. One of the mosaics is on display in Central Milton Keynes Shopping Centre.

The first farmhouse was constructed in the late 1st century,[1] located downhill from where there had previously been an Iron-Age settlement.[2] In the 2nd century a temple or mausoleum was constructed on the hilltop. Around 170 AD the farmstead was destroyed by fire,[1] but by the late 3rd century it had been replaced by a larger house.[3] In the 4th century major renovations were undertaken.[4] Geometric mosaics were added to many rooms and the main bath-suite was rebuilt and enlarged.[5] In front of the villa a formal garden was laid out together with an ornamental fish-pond.[5] On the top of the hill, the mausoleum was demolished and a circular shrine was built nearby.[4]

The villa was partially excavated in the 1970s, and then more fully in 1983-7, becoming one of the most extensively excavated Roman villas in Britain.[5] The villa has since been reburied to ensure its preservation, but the principal rooms have been marked out on the ground with modern stonework, and the fish-pond has been reconstructed.[5] The mosaics have been removed from the site, and one is prominently displayed in Central Milton Keynes Shopping Centre.[6] 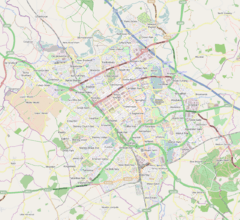 Location in Milton Keynes
zoom in