One of the many applications of Bayes’ theorem is Bayesian inference, a particular approach to statistical inference. When applied, the probabilities involved in Bayes’ theorem may have different probability interpretations. With the Bayesian probability interpretation the theorem expresses how a subjective degree of belief should rationally change to account for availability of prior related evidence. Bayesian inference is fundamental to Bayesian statistics.

Bayes’ theorem is named after Rev. Thomas Bayes (/ˈbeɪz/; 1701–1761), who first provided an equation that allows new evidence to update beliefs. It was further developed by Pierre-Simon Laplace, who first published the modern formulation in his 1812 “Théorie analytique des probabilités.” Sir Harold Jeffreys put Bayes’ algorithm and Laplace's formulation on an axiomatic basis. Jeffreys wrote that Bayes’ theorem “is to the theory of probability what the Pythagorean theorem is to geometry.”[1] 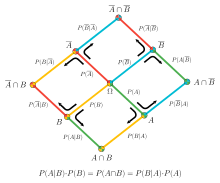 Visualization of Bayes' theorem by the superposition of two decision trees

Bayes' theorem is stated mathematically as the following equation:[2]

Next, suppose that the person is 65 years old. Let us assume that cancer and age are related. The probability that a person has cancer when they are 65 years old is known as the “current probability”, where “current” refers to the theorized situation upon finding out information about the particular case at hand.

It may come as a surprise that even though being 65 years old increases the risk of having cancer, that person’s probability of having cancer is still fairly low. This is because the base rate of cancer (regardless of age) is low. This illustrates both the importance of base rate, as well as that it is commonly neglected.[3] Base rate neglect leads to serious misinterpretation of statistics; therefore, special care should be taken to avoid such mistakes. Becoming familiar with Bayes’ theorem is one way to combat the natural tendency to neglect base rates. 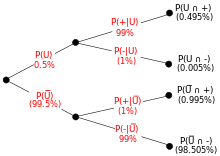 Suppose a drug test is 99% sensitive and 99% specific. That is, the test will produce 99% true positive results for drug users and 99% true negative results for non-drug users. Suppose that 0.5% of people are users of the drug. If a randomly selected individual tests positive, what is the probability that he is a user?

Despite the apparent accuracy of the test, if an individual tests positive, it is more likely that they do not use the drug than that they do. This again illustrates the importance of base rates, and how the formation of policy can be egregiously misguided if base rates are neglected.

The entire output of a factory is produced on three machines. The three machines account for 20%, 30%, and 50% of the output, respectively. The fraction of defective items produced is this: for the first machine, 5%; for the second machine, 3%; for the third machine, 1%. If an item is chosen at random from the total output and is found to be defective, what is the probability that it was produced by the third machine?

To answer the original question, we first find P(B). That can be done in the following way:

Hence 2.4% of the total output of the factory is defective.

We are given that B has occurred, and we want to calculate the conditional probability of A3. By Bayes' theorem, 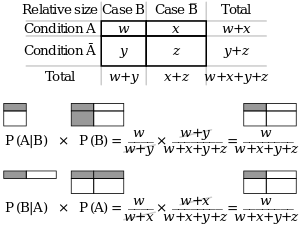 In the Bayesian (or epistemological) interpretation, probability measures a “degree of belief.” Bayes’ theorem then links the degree of belief in a proposition before and after accounting for evidence. For example, suppose it is believed with 50% certainty that a coin is twice as likely to land heads than tails. If the coin is flipped a number of times and the outcomes observed, that degree of belief may rise, fall or remain the same depending on the results.

For proposition A and evidence B,

For more on the application of Bayes’ theorem under the Bayesian interpretation of probability, see Bayesian inference. 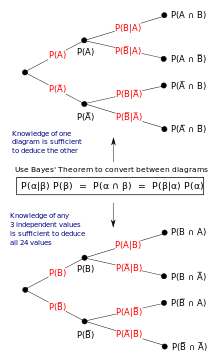 The role of Bayes’ theorem is best visualized with tree diagrams, as shown to the right. The two diagrams partition the same outcomes by A and B in opposite orders, to obtain the inverse probabilities. Bayes’ theorem serves as the link between these different partitionings. 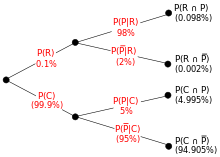 Tree diagram illustrating frequentist example. R, C, P and P bar are the events representing rare, common, pattern and no pattern. Percentages in parentheses are calculated. Note that three independent values are given, so it is possible to calculate the inverse tree (see figure above).

From the extended form of Bayes’ theorem (since any beetle can be only rare or common),

In many applications, for instance in Bayesian inference, the event B is fixed in the discussion, and we wish to consider the impact of its having been observed on our belief in various possible events A. In such a situation the denominator of the last expression, the probability of the given evidence B, is fixed; what we want to vary is A. Bayes’ theorem then shows that the posterior probabilities are proportional to the numerator:

(proportionality over A for given B).

In words: posterior is proportional to prior times likelihood.[4]

Adding these two formulas we deduce that

Another form of Bayes’ Theorem that is generally encountered when looking at two competing statements or hypotheses is:

For an epistemological interpretation:

For proposition A and evidence or background B,[5]

Often, for some partition {Aj} of the sample space, the event space is given or conceptualized in terms of P(Aj) and P(B | Aj). It is then useful to compute P(B) using the law of total probability:

In the special case where A is a binary variable:

Diagram illustrating the meaning of Bayes' theorem as applied to an event space generated by continuous random variables X and Y. Note that there exists an instance of Bayes' theorem for each point in the domain. In practice, these instances might be parametrized by writing the specified probability densities as a function of x and y.

Consider a sample space Ω generated by two random variables X and Y. In principle, Bayes’ theorem applies to the events A = {X = x} and B = {Y = y}. However, terms become 0 at points where either variable has finite probability density. To remain useful, Bayes’ theorem may be formulated in terms of the relevant densities (see Derivation).

If X is continuous and Y is discrete,

If X is discrete and Y is continuous,

If both X and Y are continuous,

A continuous event space is often conceptualized in terms of the numerator terms. It is then useful to eliminate the denominator using the law of total probability. For fY(y), this becomes an integral:

is called the Bayes factor or likelihood ratio and the odds between two events is simply the ratio of the probabilities of the two events. Thus

So the rule says that the posterior odds are the prior odds times the Bayes factor, or in other words, posterior is proportional to prior times likelihood.

Bayes’ theorem may be derived from the definition of conditional probability:

For two continuous random variables X and Y, Bayes’ theorem may be analogously derived from the definition of conditional density:

Bayes’ theorem was named after the Reverend Thomas Bayes (1701–1761), who studied how to compute a distribution for the probability parameter of a binomial distribution (in modern terminology). Bayes’ unpublished manuscript was significantly edited by Richard Price before it was posthumously read at the Royal Society. Price edited[6] Bayes’ major work “An Essay towards solving a Problem in the Doctrine of Chances” (1763), which appeared in “Philosophical Transactions,”[7] and contains Bayes’ Theorem. Price wrote an introduction to the paper which provides some of the philosophical basis of Bayesian statistics. In 1765 he was elected a Fellow of the Royal Society in recognition of his work on the legacy of Bayes.[8][9]

The French mathematician Pierre-Simon Laplace reproduced and extended Bayes’ results in 1774, apparently quite unaware of Bayes’ work.[10][11] Stephen Stigler suggested in 1983 that Bayes’ theorem was discovered by Nicholas Saunderson, a blind English mathematician, some time before Bayes;[12][13] that interpretation, however, has been disputed.[14]

Martyn Hooper[15] and Sharon McGrayne[16] have argued that Richard Price's contribution was substantial:

By modern standards, we should refer to the Bayes–Price rule. Price discovered Bayes’ work, recognized its importance, corrected it, contributed to the article, and found a use for it. The modern convention of employing Bayes’ name alone is unfair but so entrenched that anything else makes little sense.[16]