In Bayesian statistics, a maximum a posteriori probability (MAP) estimate is an estimate of an unknown quantity, that equals the mode of the posterior distribution. The MAP can be used to obtain a point estimate of an unobserved quantity on the basis of empirical data. It is closely related to Fisher's method of maximum likelihood (ML) estimation, but employs an augmented optimization objective which incorporates a prior distribution (that quantifies the additional information available through prior knowledge of a related event) over the quantity one wants to estimate. MAP estimation can therefore be seen as a regularization of ML estimation.

Assume that we want to estimate an unobserved population parameter

on the basis of observations

be the sampling distribution of

is the probability of

when the underlying population parameter is

is known as the likelihood function and the estimate:

is the maximum likelihood estimate of

Now assume that a prior distribution

exists. This allows us to treat

as a random variable as in Bayesian statistics. We can calculate the posterior distribution of

is density function of

is the domain of

The method of maximum a posteriori estimation then estimates

as the mode of the posterior distribution of this random variable:

and therefore plays no role in the optimization. Observe that the MAP estimate of

coincides with the ML estimate when the prior

is uniform (that is, a constant function).

When the loss function is of the form

goes to 0, the Bayes estimator approaches the MAP estimator, provided that the distribution of

is unimodal. But generally a MAP estimator is not a Bayes estimator unless

MAP estimates can be computed in several ways:

While MAP estimation is a limit of Bayes estimators (under the 0-1 loss function), it is not very representative of Bayesian methods in general. This is because MAP estimates are point estimates, whereas Bayesian methods are characterized by the use of distributions to summarize data and draw inferences: thus, Bayesian methods tend to report the posterior mean or median instead, together with credible intervals. This is both because these estimators are optimal under squared-error and linear-error loss respectively - which are more representative of typical loss functions - and because the posterior distribution may not have a simple analytic form: in this case, the distribution can be simulated using Markov chain Monte Carlo techniques, while optimization to find its mode(s) may be difficult or impossible. 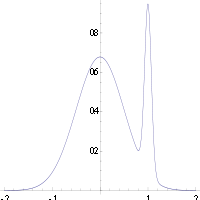 In many types of models, such as mixture models, the posterior may be multi-modal. In such a case, the usual recommendation is that one should choose the highest mode: this is not always feasible (global optimization is a difficult problem), nor in some cases even possible (such as when identifiability issues arise). Furthermore, the highest mode may be uncharacteristic of the majority of the posterior.

Finally, unlike ML estimators, the MAP estimate is not invariant under reparameterization. Switching from one parameterization to another involves introducing a Jacobian that impacts on the location of the maximum.[1]

As an example of the difference between Bayes estimators mentioned above (mean and median estimators) and using a MAP estimate, consider the case where there is a need to classify inputs

as either positive or negative (for example, loans as risky or safe). Suppose there are just three possible hypotheses about the correct method of classification

classifies it as positive, whereas the other two classify it as negative. Using the MAP estimate for the correct classifier

is classified as positive, whereas the Bayes estimators would average over all hypotheses and classify

Suppose that we are given a sequence

random variables and an a priori distribution of

. We wish to find the MAP estimate of

. Note that the normal distribution is its own conjugate prior, so we will be able to find a closed-form solution analytically.

The function to be maximized is then given by

which is equivalent to minimizing the following function of

Thus, we see that the MAP estimator for μ is given by

which turns out to be a linear interpolation between the prior mean and the sample mean weighted by their respective covariances.

is called a non-informative prior and leads to an ill-defined a priori probability distribution; in this case