In statistics, a likelihood function (often simply the likelihood) is a function of the parameters of a statistical model given data. Likelihood functions play a key role in statistical inference, especially methods of estimating a parameter from a set of statistics. In informal contexts, "likelihood" is often used as a synonym for "probability." In statistics, a distinction is made depending on the roles of outcomes vs. parameters. Probability is used before data are available to describe possible future outcomes given a fixed value for the parameter (or parameter vector). Likelihood is used after data are available to describe a function of a parameter (or parameter vector) for a given outcome.

The likelihood function is defined differently for discrete and continuous probability distributions.

Let X be a random variable with a discrete probability distribution p depending on a parameter θ. Then the function

considered as a function of θ, is called the likelihood function (of θ, given the outcome x of the random variable X). Sometimes the probability of the value x of X for the parameter value θ is written as

to emphasize that this differs from

which is not a conditional probability, because θ is a parameter and not a random variable.

Let X be a random variable following an absolutely continuous probability distribution with density function f depending on a parameter θ. Then the function

considered as a function of θ, is called the likelihood function (of θ, given the outcome x of X). Sometimes the density function for the value x of X for the parameter value θ is written as

; this should not be confused with

which should not be considered a conditional probability density.

In measure-theoretic probability theory, the density function is defined as the Radon-Nikodym derivative of the probability distribution relative to a dominating measure. This provides a likelihood function for any probability model with all distributions, whether discrete, absolutely continuous, a mixture or something else. (Likelihoods will be comparable, e.g., for parameter estimation, only if they are Radon–Nikodym derivatives with respect to the same dominating measure.) .

Edwards [1] established the axiomatic basis for use of the log-likelihood ratio as a measure of relative support for one hypothesis against another. The support function is then the natural logarithm of the likelihood function. Both terms are used in phylogenetics but were not adopted in a general treatment of the topic of statistical evidence.[2]

The gamma distribution has two parameters α and β. The likelihood function is

Finding the maximum likelihood estimate of β for a single observed value x looks rather daunting. Its logarithm is much simpler to work with:

Maximizing the log-likelihood first requires taking the partial derivative with respect to β:

To complete the maximization procedure for the joint log-likelihood, the equation is set to zero and solved for β:

denotes the maximum-likelihood estimate, and

is the sample mean of the observations.

Likelihood function of a parameterized model

Among many applications, we consider here one of broad theoretical and practical importance. Given a parameterized family of probability density functions (or probability mass functions in the case of discrete distributions)

where θ is the parameter, the likelihood function is

This is not the same as the probability that those parameters are the right ones, given the observed sample. Attempting to interpret the likelihood of a hypothesis given observed evidence as the probability of the hypothesis is a common error, with potentially disastrous consequences in medicine, engineering or jurisprudence. See prosecutor's fallacy for an example of this.

lies in the interval

is a specific observed value and

a constant, is given by

is positive and constant. Because

is the probability density function of the variable

. The first fundamental theorem of calculus and the l'Hôpital's rule together provide that

and so maximizing the probability density at

amounts to maximizing the likelihood of the specific observation 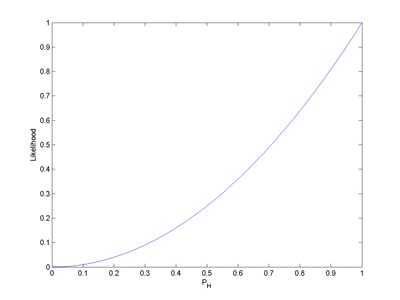 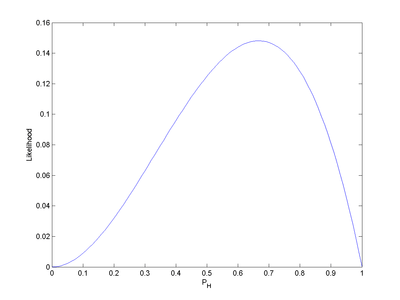 , then the probability of seeing two heads is 0.25:

With this, we can say that the likelihood that

, given the observation HH, is 0.25. For that, we need concepts from Bayesian inference. In particular, Bayes' theorem says that the posterior probability (density) is proportional to the likelihood times the prior probability. When tossing a physical coin, the probability is zero that

is exactly 0.5, because any physical device has imperfections. The edges of any coin will be slightly beveled, and the mass distribution will never be perfectly uniform. This will generate a distribution for

. Moreover, the features on the coin generate slight imbalances, suggesting that even the average of this distribution will likely not be exactly 0.5. However, it might be hard to find a coin that is demonstratively not fair, i.e., for which

Consider a jar containing N lottery tickets numbered from 1 through N. If you pick a ticket randomly then you get positive integer n, with probability 1/N if n ≤ N and with probability zero if n > N. This can be written

This likelihood function is not a probability distribution, because the total

is a divergent series.

Suppose, however, that you pick two tickets rather than one.

When considered a function of N for fixed n2, this is a likelihood function. The maximum likelihood estimate for N is N0 = n2.

This time the total

is a convergent series, and so this likelihood function can be normalized into a probability distribution.

With 2 or more tickets, the probability distributions just derived match the results from a Bayesian analysis assuming an improper, uniform prior for N over all positive integers. The use of improper priors is often justified by saying that the information from the data dominates the information from the prior. If only a very few tickets are available, and a precise answer is important, this can justify the work of collecting relevant information from other sources to use as an informative prior.

Suppose that the maximum likelihood estimate for θ is

. The relative likelihood of θ is defined[3][4] as

A 10% likelihood region for θ is

and more generally, a p% likelihood region for θ is defined[3][4] to be

If θ is a single real parameter, a p% likelihood region will typically comprise an interval of real values. In that case, the region is called a likelihood interval.[3][4][5]

The idea of basing an interval estimate on the relative likelihood goes back to Fisher in 1956 and has been used by many authors since then.[5] A likelihood interval can be used without claiming any particular coverage probability; as such, it differs from confidence intervals.

The definition of relative likelihood can be generalized to compare different statistical models. This generalization is based on AIC (Akaike information criterion), or sometimes AICc (Akaike Information Criterion with correction).

Suppose that, for some dataset, we have two statistical models, M1 and M2. Also suppose that AIC(M1) ≤ AIC(M2). Then the relative likelihood of M2 with respect to M1 is defined[6] to be

To see that this is a generalization of the earlier definition, suppose that we have some model M with a (possibly multivariate) parameter θ. Then for any θ, set M2 = M(θ), and also set M1 = M(

). The general definition now gives the same result as the earlier definition.

One example occurs in 2×2 tables, where conditioning on all four marginal totals leads to a conditional likelihood based on the non-central hypergeometric distribution. This form of conditioning is also the basis for Fisher's exact test.

Sometimes we can remove the nuisance parameters by considering a likelihood based on only part of the information in the data, for example by using the set of ranks rather than the numerical values. Another example occurs in linear mixed models, where considering a likelihood for the residuals only after fitting the fixed effects leads to residual maximum likelihood estimation of the variance components.

Likelihood (eikos, versimilis) captures the idea that something is likely to happen or to have happened. As a formal concept, it has appeared in jurisprudence, commerce and scholasticism long before it was given a rigorous mathematical foundation.[12] In English, "likelihood" has been distinguished as being related to, but weaker than, "probability" since its earliest uses. The comparison of hypotheses by evaluating likelihoods has been used for centuries, for example by John Milton in Areopagitica (1644): "when greatest likelihoods are brought that such things are truly and really in those persons to whom they are ascribed".

In the Netherlands Christiaan Huygens used the concept of likelihood in his book "Van rekeningh in spelen van geluck" ("On Reasoning in Games of Chance") in 1657.

In English, "likelihood" appears in many writings by Charles Sanders Peirce, where model-based inference (usually abduction but sometimes including induction) is distinguished from statistical procedures based on objective randomization. Peirce's preference for randomization-based inference is discussed in "Illustrations of the Logic of Science" (1877–1878) and "A Theory of Probable Inference" (1883)".

"probabilities that are strictly objective and at the same time very great, although they can never be absolutely conclusive, ought nevertheless to influence our preference for one hypothesis over another; but slight probabilities, even if objective, are not worth consideration; and merely subjective likelihoods should be disregarded altogether. For they are merely expressions of our preconceived notions" (7.227 in his Collected Papers).

"But experience must be our chart in economical navigation; and experience shows that likelihoods are treacherous guides. Nothing has caused so much waste of time and means, in all sorts of researchers, as inquirers' becoming so wedded to certain likelihoods as to forget all the other factors of the economy of research; so that, unless it be very solidly grounded, likelihood is far better disregarded, or nearly so; and even when it seems solidly grounded, it should be proceeded upon with a cautious tread, with an eye to other considerations, and recollection of the disasters caused." (Essential Peirce, volume 2, pages 108–109)

Like Thiele, Peirce considers the likelihood for a binomial distribution. Peirce uses the logarithm of the odds-ratio throughout his career. Peirce's propensity for using the log odds is discussed by Stephen Stigler.[16]

In Great Britain, "likelihood" was popularized in mathematical statistics by Ronald Fisher in 1922:[17] "On the mathematical foundations of theoretical statistics". In that paper, Fisher also uses the term "method of maximum likelihood". Fisher argues against inverse probability as a basis for statistical inferences, and instead proposes inferences based on likelihood functions. Fisher's use of "likelihood" fixed the terminology that is used by statisticians throughout the world.

In 2010, the Intergovernmental Panel on Climate Change published the following "likelihood scale" for use in its Fifth Assessment Report:[18]