Bedford Hills is a hamlet in the Town of Bedford, Westchester County, New York, United States. The population was 3,001 at the 2010 census, which lists the community as a census-designated place.[3]

When the railroad was built in 1847, Bedford Hills was known as Bedford Station. Bedford Hills extends from a business center at the railroad station to farms and estates, eastward along Harris, Babbitt and Bedford Center Roads and south along the Route 117 business corridor up to Mt. Kisco. Bedford Hills is the seat of government of the Town of Bedford. The Town House, built in 1927, and Town buildings containing the Police Department and Town offices are located in Bedford Hills. 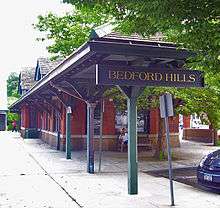 The Richard H. Mandel House, designed by Edward Durell Stone, was added to the National Register of Historic Places in 1996.[5]

Bedford Hills is the site of Stepping Stones, the historic home of Alcoholics Anonymous co-founder Bill W. and his wife Lois Burnham Wilson, founder of Al-Anon/Alateen. The home, located at 62 Oak Road in Katonah, is on the National Register of Historic Places, and has become a tour destination for members of 12-Step organizations.

All About Bedford: Connecting Our Community With a Click- the most local of news sites on the Town of Bedford, its people and its schools

The Record-Review, a weekly newspaper, reports on local issues in Katonah, Bedford, Bedford Hills and Pound Ridge. The newspaper began publishing in 1995. The Record-Review web site is www.record-review.com.

Bedford Hills Elementary School is a K-5 school which many children in the town attend.

In May 2010, Bedford Hills celebrated its centennial with a number of community-wide events, including a scavenger hunt and a pie baking contest.