Katonah is one of three hamlets and census-designated places (CDP) within the town of Bedford, Westchester County, in the U.S. state of New York, specifically northern Westchester. The Katonah CDP had a population of 1,679 at the 2010 census.[1] 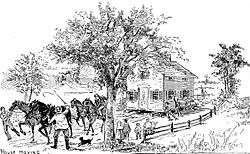 Moving from Old Katonah to New

Katonah is named for Chief Katonah,[2] an American Indian from whom the land of Bedford was purchased by a group of English colonists. Founded with the name Whitlockville, the town changed its name, and later was moved to its present site in 1897, when its former site (Old Katonah) was flooded by the construction of the Cross River Reservoir. More than 50 buildings were moved from the old site to New Katonah, rolled on logs pulled by horses. The move was originally ordered to start in 1894, but litigation delayed the process by almost three years.

Eleven-year-old child named B. Robertson wrote the following to a children magazine on March 2nd, 1897:

Katonah was not the only village affected by New York City's growing demand for water. The villages of Kirbyville and New Castle Corners were also condemned by the city but were never moved.[4]

During the American Revolution military battles or skirmishes did not take place in the area that is now the Village of Katonah. However, most local men joined the Continental side, with some joining the New York 4th Regiment of the Line and most joining the local Militia. Though the Bedford Township lay in what was called "Neutral Ground", supposedly not molested by military of either side, its inhabitants were preyed on by the lawless of both sides. Actually, this area suffered less from lawless depredations than other areas in the Neutral Ground, because of the proximity of the Croton River and the "Westchester Lines", a sparse string of outposts defended by units of the Continental Army.[5]

The Katonah Village Historic District, and St. Luke's Episcopal Church are listed on the National Register of Historic Places. The John Jay Homestead and Stepping Stones, home of Bill and Lois Wilson, received the designation of National Historic Landmark.[6]

Katonah is classified as a hamlet, with no legal status as an administrative jurisdiction. The Katonah post office serves portions of the towns of Bedford, Lewisboro and Somers. Katonah was identified as a census-designated place (CDP) for the first time in 2010.

The surrounding countryside includes the John Jay Homestead, the former home of John Jay, the first Chief Justice of the Supreme Court of the United States. Nearby is The Harvey School, a private day school founded in the 19th century which offers five-day boarding, and which counts among its alumni Doonesbury cartoonist Garry Trudeau. Martha Stewart and Ralph Lauren live in the Katonah area, just down the road from the John Jay Homestead. Stanley Tucci, Blake Lively and Ryan Reynolds live very close to the Katonah area as well.

By its residents, Katonah is often styled as a "village". For example, its library is called the Katonah Village Library and other commercial functions and public works incorporate similar terminology. Katonah generally has a concentration of population and businesses which may include portions of several towns. Katonah does have its own ZIP code, 10536, and a Metro-North station. As a result of the town's close proximity to New York City and its immediate connection to the aforementioned railroad station and the interstate, a sizable portion of the town consists of commuters. The area is part of the Katonah-Lewisboro school district.

Katonah is home to Stepping Stones, the historic home of Alcoholics Anonymous co-founder Bill W. and his wife Lois Wilson. The house at 62 Oak Road is on the State and National Register of Historic Places.

From 1921 to 1937, Katonah was home to the Brookwood Labor College, the nation's first residential labor college.

The Katonah Museum of Art

The Katonah Museum of Art is located in Katonah. The Caramoor International Music Festival, which hosts the Orchestra of St. Luke's, is held annually at Caramoor, 2 miles (3 km) east of the hamlet. John Jay High School holds its annual commencement ceremony at Caramoor as well. John Jay Homestead, the former home of US Supreme Court Chief Justice John Jay is a state historic site and museum located down the road from Caramoor. The Katonah Poetry Series led by former US Poet Laureate Billy Collins holds readings at Katonah Village Library. Katonah is also home to the historic Charles Department Store, now running in its third generation. Many of the stores located in the village are either family-run or small companies. Such stores include Squires Family Clothing and Footwear, Kelloggs and Lawrence, and the Village Market. These are all well known to the town's residents, and provide an easily accessible source for basic necessities. Katonah's history is kept alive as the Katonah Historical Museum intrigues its local residents to keep the history alive for current and future residents. The Katonah Historical Museum opened in 1984, it is in the lower level of the Katonah Village Library. There are plenty of exhibits regarding the moving of houses from Old Katonah to New Katonah, there is even a mini-model of a house in the process of being moved, that house is also right in town a couple of blocks away. Another attraction is Muscoot Farm. During the 1920s-1930s farming activity on Muscoot Farm was peaking, the farm land coming from the Hopkin's family has been taken care of by Westchester County thus far since 1967 due to high labor costs. The farm has many animals, camps, workshops for youth and adult, hayrides, opportunities for field trips and even birthday events. Another attraction is the Katonah Art Center, it has two large painting studios, a children’s studio, a pottery studio, a multi-arts studio, a darkroom and a Mac computer lab. They also offer pottery, photography, painting and drawing classes, and summer camps.

In early 2007, groups representing the hamlet came out in opposition to a trademark filed by homemaking mogul Martha Stewart for a new furniture line called the "Katonah Collection".[10] Stewart purchased a 152-acre (0.62 km2) estate in Katonah in 2000,[11] and it is there that she spent her five months of house arrest following her prison term resulting from charges of "lying to investigators".[12] Representatives stated that Stewart was seeking to "honor the town" and the new furniture line was "...paying homage to this beautiful region."[13] The pending trademark was contested by the Katonah Village Improvement Society and Katonah Architectural Hardware, along with support from the Ramapough Mountain Indians[14] who foresaw legal conflict should Stewart succeed in trademarking the name for her furniture line.[15] (View current appeals at the U.S. Trademark Office.)[16][17]

Katonah is a part of the Katonah-Lewisboro School District. It contains Katonah Elementary School, although some residents go to the neighboring "Increase Miller Elementary School" in Goldens Bridge. In 2014, the school district voted to get rid of the Lewisboro Elementary school, moving elementary students around to other institutions within the district. This created huge controversy with parents, as many of them did not believe this change was necessary, and even filed petitions and hosted strikes against this act. Both schools matriculate into John Jay Middle School and John Jay High School. Katonah is also home to two (2) private schools, the co-educational, college preparatory school The Harvey School, and The Montfort Academy, a private, Roman Catholic high school that recently moved to Mount Vernon, New York.

The hamlet is served by the Katonah Volunteer Fire Department, which also hosts the annual Katonah carnival, parade, and "chili night." Emergency medical services are provided by the Katonah-Bedford Hills Volunteer Ambulance Corps. The Bedford police department provides police and traffic enforcement to the town of Bedford, including Katonah, Bedford Hills and Bedford Village.