The Mughal emperors were a branch of the Timurid dynasty. From the early 16th century to the early 18th they built and ruled the Mughal Empire on the Indian subcontinent, mainly corresponding to the modern countries of Bangladesh, India and Pakistan. Their power rapidly dwindled during the 18th century and the last of the emperors was deposed in 1857, with the establishment of the British Raj.[1] The dynasty was of central Asian Turco-Mongol origin from an area now part of modern-day Uzbekistan, and the emperors claimed direct descent from both Timur and Genghis Khan, through his son Chagatai Khan. Timur is generally known in the West as Tamerlane the Great.

At their empire's greatest extent in the late 17th and early 18th centuries, they controlled much of the Indian subcontinent, extending from Bengal in the east to Kabul and Sindh in the west, Kashmir in the north to the Kaveri basin in the south.[2] Its population at the time has been estimated as between 110 and 150 million (a quarter of the world's population), over a territory of more than 3.2 million square kilometres (1.2 million square miles).[3] 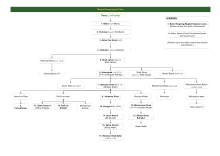 Genealogy of the Mughal Dynasty. Only principal offsprings of each emperor are provided in the chart.

The Mughal Empire was founded by Babur, a Central Asian ruler who was descended from the Turko-Mongol conqueror Timur on his father's side and from Chagatai, the second son of the Mongol ruler Genghis Khan, on his mother’s side.[4] Ousted from his ancestral domains in Central Asia by Uzbek Khan, the 14-year old Prince Babur turned to India to satisfy his ambitions. He established himself in Kabul and then pushed steadily southward into India from Afghanistan through the Khyber Pass.[4] Babur's forces occupied much of northern India after his victory at Panipat in 1526.[4] The preoccupation with wars and military campaigns, however, did not allow the new emperor to consolidate the gains he had made in India.[4] The instability of the empire became evident under his son, Humayun, who was driven out of India and into Persia by rebels.[4] Humayun's exile in Persia established diplomatic ties between the Safavid and Mughal Courts, and led to increasing West Asian cultural influence in the Mughal court. The restoration of Mughal rule began after Humayun’s triumphant return from Persia in 1555, but he died from a fatal accident shortly afterwards.[4] Humayun's son, Akbar, succeeded to the throne under a regent, Bairam Khan, who helped consolidate the Mughal Empire in India.[4]

Through warfare and diplomacy, Akbar was able to extend the empire in all directions, and controlled almost the entire Indian subcontinent north of the Godavari river. He created a new class of nobility loyal to him from the military aristocracy of India's social groups, implemented a modern government and supported cultural developments.[4] At the same time Akbar intensified trade with European trading companies. The Indian historian Abraham Eraly wrote that foreigners were often impressed by the fabulous wealth of the Mughal court, but the glittering court hid darker realities, namely that about a quarter of the empire's gross national product was owned by 655 families while the bulk of India's 120 million people lived in appalling poverty.[5] After suffering what appears to have been an epileptic seizure in 1578 while hunting tigers, which he regarded as a religious experience, Akbar grew disenchanted with Islam, and came to embrace a syncretistic mixture of Hinduism and Islam.[6] Akbar allowed free expression of religion and attempted to resolve socio-political and cultural differences in his empire by establishing a new religion, Din-i-Ilahi, with strong characteristics of a ruler cult.[4] He left his successors an internally stable state, which was in the midst of its golden age, but before long signs of political weakness would emerge.[4] Akbar's son, Jahangir, ruled the empire at its peak, but he was addicted to opium, neglected the affairs of the state, and came under the influence of rival court cliques.[4] During the reign of Jahangir's son, Shah Jahan, the culture and splendour of the luxurious Mughal court reached its zenith as exemplified by the Taj Mahal.[4] The maintenance of the court, at this time, began to cost more than the revenue.[4]

Shah Jahan's eldest son, the liberal Dara Shikoh, became regent in 1658, as a result of his father's illness. However, a younger son, Aurangzeb, allied with the Islamic orthodoxy against his brother, who championed a syncretistic Hindu-Muslim religion and culture, and ascended to the throne. Aurangzeb defeated Dara in 1659 and had him executed.[4] Although Shah Jahan fully recovered from his illness, Aurangzeb declared him incompetent to rule and had him imprisoned. During Aurangzeb's reign, the empire gained political strength once more, but his religious conservatism and intolerance undermined the stability of Mughal society.[4] Aurangzeb expanded the empire to include almost the whole of South Asia, but at his death in 1707, many parts of the empire were in open revolt.[4] Aurangzeb's attempts to reconquer his family's ancestral lands in Central Asia were not successful while his successful conquest of the Deccan region proved to be a Pyrrhic victory that cost the empire heavily in both blood and treasure.[7] A further problem for Aurangzeb was the army had always been based upon the land-owning aristocracy of northern India who provided the cavalry for the campaigns, and the empire had nothing equivalent to the Janissary corps of the Ottoman Empire.[8] The long and costly conquest of the Deccan had badly dented the "aura of success" that surrounded Aurangzeb, and from the late 17th century onwards, the aristocracy become increasing unwilling to provide forces for the empire's wars as the prospect of being rewarded with land as a result of a successful war was seen as less and less likely.[9] Furthermore, the fact that at the conclusion of the conquest of the Deccan, Aurangzeb had very selectively rewarded some of the noble families with confiscated land in the Deccan had left those aristocrats who received no confiscated land as reward and for whom the conquest of the Deccan had cost dearly, feeling badly disgruntled and unwilling to participate in further campaigns.[10] Aurangzeb's son, Shah Alam, repealed the religious policies of his father, and attempted to reform the administration. However, after his death in 1712, the Mughal dynasty sank into chaos and violent feuds. In the year 1719 alone, four emperors successively ascended the throne.[4]

During the reign of Muhammad Shah, the empire began to break up, and vast tracts of central India passed from Mughal to Maratha hands. Mughal warfare had always been based upon heavy artillery for sieges, heavy cavalry for offensive operations and light cavalry for skirmishing and raids.[7] To control a region, the Mughals had always sought to occupy a strategic fortress in some region, which would serve as a nodal point from which the Mughal army would emerge to take on any enemy that challenged the empire.[7] This system was not only expensive, but also made the army somewhat inflexible as the assumption was always the enemy would retreat into a fortress to be besieged or would engage in a set-piece decisive battle of annihilation on open ground.[7] The militantly Hindu Marathas were expert horsemen who refused to engage in set-piece battles, but rather engaged in campaigns of guerrilla warfare, a war of raids, ambushes and attacks upon the Mughal supply lines.[7] The Marathas were unable to take the Mughal fortresses via storm or formal siege as they lacked the artillery, but by constantly intercepting supply columns, they were able to starve Mughal fortresses into submission.[7] Successive Mughal commanders refused to adjust their tactics and develop an appropriate counter-insurgency strategy, which led to the Mughals losing more and more ground to the Maratha.[7] The Indian campaign of Nader Shah of Persia culminated with the Sack of Delhi and shattered the remnants of Mughal power and prestige,[4] as well as drastically accelerating its decline and alarming other far-off invaders, including the later British. Many of the empire's elites now sought to control their own affairs, and broke away to form independent kingdoms.[4] The Mughal Emperor, however, continued to be the highest manifestation of sovereignty. Not only the Muslim gentry, but the Maratha, Hindu, and Sikh leaders took part in ceremonial acknowledgements of the emperor as the sovereign of India.[11]

In the next decades, the Afghans, Sikhs, and Marathas battled against each other and the Mughals, only to prove the fragmented state of the empire. The Mughal Emperor Shah Alam II made futile attempts to reverse the Mughal decline, and ultimately had to seek the protection of outside powers. In 1784, the Marathas under Mahadji Scindia won acknowledgement as the protectors of the emperor in Delhi, a state of affairs that continued until after the Second Anglo-Maratha War. Thereafter, the British East India Company became the protectors of the Mughal dynasty in Delhi.[11] After a crushed rebellion which he nominally led in 1857-58, the last Mughal, Bahadur Shah Zafar, was deposed by the British government, who then assumed formal control of a large part of the former empire,[4] marking the start of the British Raj.

Note:The Mughal Emperors practised polygamy. Besides their wives, they also had a number of concubines in their harem, who produced children. This makes it difficult to identify all the offspring of each emperor.[12]