National Museum of Colombo, also known as the Sri Lanka National Museum is one of two museums in Colombo. It is the largest museum in Sri Lanka. It is maintained by the Department of National Museum of the central government. The museum holds contains a collections of much importance to Sri Lanka such as the regalia of the country, including the throne and crown of the Kandyan monarchs as well as many other exhibits telling the story of ancient Sri Lanka.[1]

The Colombo museum as it was called at the beginning was established on 1 January 1877. It founder was Sir William Henry Gregory the British Governor of Ceylon (Sri Lanka) at the time. The Royal Asiatic Society (CB) was instrumental in bringing to the notice of Gregory on his appointment as Governor in 1872 the need for a public Museum with much difficulty the approval of the legislative council was obtained within a year. The Architect of the Public Works Department, J. G. Smither was able to prepare the plans for new structure on Italian Architectural style. The construction was completed in 1876 and the Museum commenced it functions in the following year.

The construction of the Museum was carried out by Arasi Marikar Wapchie Marikar (born 1829, died 1925, aka Wapchi Marikar Bass, who was descended from the Sheiq Fareed family who arrived in Ceylon in 1060 AD), paternal grandfather of Sir Razik Fareed, Kt., JPUM, OBE, MP (born, 29 December 1893, died 23 August 1984). Wapchi Marikar Bass was the builder of the General Post Office in Colombo, Colombo Customs, Old Town Hall in Pettah, Galle Face Hotel, Victoria Arcade, Finlay Moir building, the Clock Tower, Batternburg Battery and many other buildings that are still standing today (2011). The Old Town Hall in Pettah, which is now a busy market, was built on a contract for the sum of 689 Sterling Pounds.

In January 1877, the completed building of the Colombo Museum was declared open by Governor Gregory, in the presence of a large crowd, amongst which there were many Muslims present. At the end of the ceremony, the governor asked Arasi Marikar Wapchi Marikar what honour he wished to have for his dedication. He asked the same question of the carpenter who assisted Wapchi Marikar with the woodwork of the Museum, who requested and was awarded a local rank. Wapchi Marikar requested that the museum be closed on Fridays, the Muslim sabbath; this request was granted and maintained, although the Museum later much opened on all days except public holidays[2]

When the throne of the last Kandyan King was to be exhibited at the Museum, the then Prime Minister, Mr. D.S.Senanayake, obtained the consent of Sir Razik Fareed, Wapchi Marikar’s grandson, to keep the Museum open on the intervening Fridays only.

During the period between 1877 and 1999, the authorities of the museum took various steps to display the cultural and natural heritage of the country for this purpose. Several other wings were added from time to time under the direction of Dr. Arthur Willey and Dr. Joseph Pearson new structures were built during the period of Dr. P. E. P. Deraniyagala, Dr. P. H. D. H. de Silva and Sirinimal Lakdusinghe. One of the natural history museum, and yet another consists of the auditorium. These buildings would facilitate the extension of the library ethnological and Anthropological studies, etc.

The museum was given the status of a national museum during the period of P. E. P. Deraniyagala. He opened branch museums in Jaffna, Kandy, and Ratnapura and a fully-fledged department of national museum was established in 1942 under the act No. 31. Nine branch museums were ultimately opened, and a school science programme and a mobile museum service are also in operation.

The museum has a copy of the Statue of Tara, a three-quarter life size statue of Tara currently held in the British Museum.[3] The crown jewels and the throne of the last King of Kandy, which were returned to Sri Lanka by the British Government, were added to the museum collection. Ground floor galleries are arranged in historical sequence, and upper galleries thematically.

A library was also established on 1 January 1877. The government Oriental library (1870) was incorporated into Colombo National Museum library, and served as the nucleus of the library collection by collecting the local publications of the past 129 years; the library has been functioning as an unofficial national library in Sri Lanka, and became the first legal deposit library in the island. From its inception, special attention was given to building up of a collection related to Sri Lanka, Orientation and Natural Science. 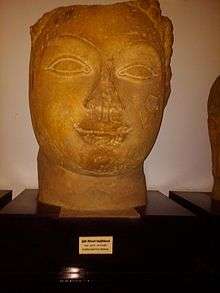 Historic Buddhist statue from the Maldives, on display as of 2011

Since 1885, by law, a copy of every document printed in the country has to be deposited in the museum library. At present the library accommodates over 12 million titles including the broad classifications of:

Services of the library