Born in New York, Shneiderman, attended the Bronx High School of Science, and received a BS in Mathematics and Physics from the City College of New York in 1968. He then went on to study at the State University of New York at Stony Brook, where he received an MS in Computer Science in 1972 and graduated with a PhD in 1973.

In 2002 his book Leonardo's Laptop: Human Needs and the New Computing Technologies was Winner of an IEEE-USA Award for Distinguished Contributions Furthering Public Understanding of the Profession. He received the IEEE Visualization Career Award in 2012. 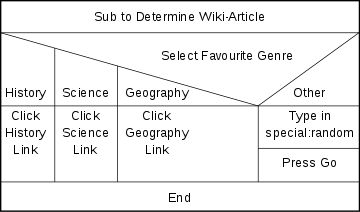 Example of a Nassi–Shneiderman diagram

In the 1973 article "Flowchart techniques for structured programming" presented at a 1973 SIGPLAN meeting Isaac Nassi and Ben Shneiderman argued:

With the advent of structured programming and GOTO-less programming a method is needed to model computation in simply ordered structures, each representing a complete thought possibly defined in terms of other thoughts as yet undefined. A model is needed which prevents unrestricted transfers of control and has a control structure closer to languages amenable to structured programming. We present an attempt at such a model.[7]

The new model technique for structured programming they presented has become known as the Nassi–Shneiderman diagram; a graphical representation of the design of structured software.[8]

Flowcharts have been a part of computer programming since the introduction of computers in the 1940s. In 1947 Goldstein and von Neumann [7] presented a system of describing processes using operation, assertion, and alternative boxes. They felt that "coding begins with the drawing of flow diagram." Prior to coding, the algorithm had been identified and understood. The flowchart represented a high level definition of the solution to be implemented on a machine. Although they were working only with numerical algorithms, they proposed a programming methodology which has since become standard practice in the computer programming field. [9]

Furthermore, Shneiderman had conducted experiments which suggested that flowcharts were not helpful for writing, understanding, or modifying computer programs. At the end of their 1977 paper, Shneiderman et al. concluded:

These insights led Shneiderman to the development of the principles of direct manipulation interface design in 1982. His cognitive analysis and detailed description of the (1) continuous representation of the objects and actions, (2) rapid, incremental, and reversible actions, and (3) physical actions and gestures to replace typed commands enabled others to design a wide array of novel graphical user interfaces. He applied those principles to develop the user interface for highlighted clickable phrases in text, that became the "hot spots" or hyperlinks of the Web. Direct manipulation concepts led to touchscreen interfaces, dynamic query slides, and information visualization designs, such as treemaps.

In 1986, he published the first edition (now on its sixth edition) of his book "Designing the User Interface: Strategies for Effective Human-Computer Interaction." Included in this book is his most popular list of "Eight Golden Rules of Interface Design," which read:

These guidelines are frequently taught in courses on Human-Computer Interaction.

His major work in recent years has been on information visualization, originating the treemap concept for hierarchical data.[12] Treemaps are implemented in most information visualization tools including Spotfire, Tableau Software, QlikView, SAS, JMP, and Microsoft Excel. Treemaps are included in hard drive exploration tools, stock market data analysis, census systems, election data, gene expression, and data journalism. The artistic side of treemaps are on view in the Treemap Art Project.

Current work deals with visualization of temporal event sequences, such as found in Electronic Health Records, in systems such as LifeLines2[14] and EventFlow.[15] These tools visualize the categorical data that make up a single patient history and they present an aggregated view that enables analysts to find patterns in large patient history databases.