Data visualization or data visualisation is viewed by many disciplines as a modern equivalent of visual communication. It involves the creation and study of the visual representation of data, meaning "information that has been abstracted in some schematic form, including attributes or variables for the units of information".[1]

A primary goal of data visualization is to communicate information clearly and efficiently via statistical graphics, plots and information graphics. Numerical data may be encoded using dots, lines, or bars, to visually communicate a quantitative message.[2] Effective visualization helps users analyze and reason about data and evidence. It makes complex data more accessible, understandable and usable. Users may have particular analytical tasks, such as making comparisons or understanding causality, and the design principle of the graphic (i.e., showing comparisons or showing causality) follows the task. Tables are generally used where users will look up a specific measurement, while charts of various types are used to show patterns or relationships in the data for one or more variables.

Data visualization is both an art and a science.[3] It is viewed as a branch of descriptive statistics by some, but also as a grounded theory development tool by others. The rate at which data is generated has increased. Data created by internet activity and an expanding number of sensors in the environment, such as satellites, are referred to as "Big Data". Processing, analyzing and communicating this data present a variety of ethical and analytical challenges for data visualization. The field of data science and practitioners called data scientists have emerged to help address this challenge.[4] 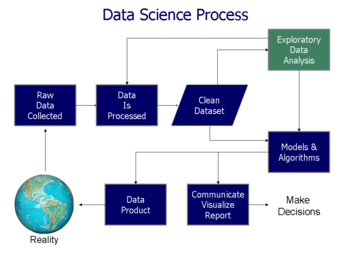 Data visualization is one of the steps in analyzing data and presenting it to users.

Indeed, Fernanda Viegas and Martin M. Wattenberg have suggested that an ideal visualization should not only communicate clearly, but stimulate viewer engagement and attention.[6]

Not limited to the communication of an information, a well-crafted data visualization is also a way to a better understanding of the data (in a data-driven research perspective),[7] as it helps uncover trends, realize insights, explore sources, and tell stories.[8]

The greatest value of a picture is when it forces us to notice what we never expected to see.

In his 1983 book The Visual Display of Quantitative Information, Edward Tufte defines 'graphical displays' and principles for effective graphical display in the following passage: "Excellence in statistical graphics consists of complex ideas communicated with clarity, precision and efficiency. Graphical displays should:

For example, the Minard diagram shows the losses suffered by Napoleon's army in the 1812–1813 period. Six variables are plotted: the size of the army, its location on a two-dimensional surface (x and y), time, direction of movement, and temperature. The line width illustrates a comparison (size of the army at points in time) while the temperature axis suggests a cause of the change in army size. This multivariate display on a two dimensional surface tells a story that can be grasped immediately while identifying the source data to build credibility. Tufte wrote in 1983 that: "It may well be the best statistical graphic ever drawn."[12]

Not applying these principles may result in misleading graphs, which distort the message or support an erroneous conclusion. According to Tufte, chartjunk refers to extraneous interior decoration of the graphic that does not enhance the message, or gratuitous three dimensional or perspective effects. Needlessly separating the explanatory key from the image itself, requiring the eye to travel back and forth from the image to the key, is a form of "administrative debris." The ratio of "data to ink" should be maximized, erasing non-data ink where feasible.[12]

A time series illustrated with a line chart demonstrating trends in U.S. federal spending and revenue over time. 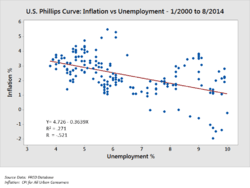 A scatterplot illustrating negative correlation between two variables (inflation and unemployment) measured at points in time.

Author Stephen Few described eight types of quantitative messages that users may attempt to understand or communicate from a set of data and the associated graphs used to help communicate the message:

Analysts reviewing a set of data may consider whether some or all of the messages and graphic types above are applicable to their task and audience. The process of trial and error to identify meaningful relationships and messages in the data is part of exploratory data analysis.

A human can distinguish differences in line length, shape orientation, and color (hue) readily without significant processing effort; these are referred to as "pre-attentive attributes." For example, it may require significant time and effort ("attentive processing") to identify the number of times the digit "5" appears in a series of numbers; but if that digit is different in size, orientation, or color, instances of the digit can be noted quickly through pre-attentive processing.[15]

Effective graphics take advantage of pre-attentive processing and attributes and the relative strength of these attributes. For example, since humans can more easily process differences in line length than surface area, it may be more effective to use a bar chart (which takes advantage of line length to show comparison) rather than pie charts (which use surface area to show comparison).[15]

There is a human side to data visualization. With the "studying [of] human perception and cognition ..." we are better able to understand the target of the data which we display.[16] Cognition refers to processes in human beings like perception, attention, learning, memory, thought, concept formation, reading, and problem solving.[17] The basis of data visualization evolved because as a picture is worth a thousand words, data displayed graphically allows for an easier comprehension of the information. Proper visualization provides a different approach to show potential connections, relationships, etc. which are not as obvious in non-visualized quantitative data. Visualization becomes a means of data exploration. Human brain neurons involve multiple functions but 2/3 of the brain's neurons are dedicated to vision.[18] With a well-developed sense of sight, analysis of data can be made on data, whether that data is quantitative or qualitative. Effective visualization follows from understanding the processes of human perception and being able to apply this to intuitive visualizations is important. Understanding how humans see and organize the world is critical to effectively communicating data to the reader. This leads to more intuitive designs.

There is a history of data visualization: beginning in the 2nd century C.E. with data arrangement into columns and rows and evolving to the initial quantitative representations in the 17th century.[16] According to the Interaction Design Foundation, French philosopher and mathematician René Descartes laid the ground work for Scotsman William Playfair. Descartes developed a two-dimensional coordinate system for displaying values, which in the late 18th century Playfair saw potential for graphical communication of quantitative data.[16] In the second half of the 20th century, Jacques Bertin used quantitative graphs to represent information "intuitively, clearly, accurately, and efficiently".[16] John Tukey and more notably Edward Tufte pushed the bounds of data visualization. Tukey with his new statistical approach: exploratory data analysis and Tufte with his book "The Visual Display of Quantitative Information", the path was paved for refining data visualization techniques for more than statisticians. With the progression of technology came the progression of data visualization; starting with hand drawn visualizations and evolving into more technical applications – including interactive designs leading to software visualization.[19] Programs like SAS, SOFA, R, Minitab, and more allow for data visualization in the field of statistics. Other data visualization applications, more focused and unique to individuals, programming languages such as D3, Python and JavaScript help to make the visualization of quantitative data a possibility.

Data visualization involves specific terminology, some of which is derived from statistics. For example, author Stephen Few defines two types of data, which are used in combination to support a meaningful analysis or visualization:

Two primary types of information displays are tables and graphs.

All these subjects are closely related to graphic design and information representation.

On the other hand, from a computer science perspective, Frits H. Post (2002) categorized the field into a number of sub-fields:[9] 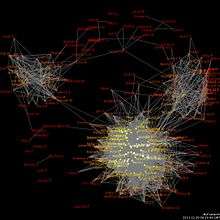 A data visualization from social media

Data presentation architecture (DPA) is a skill-set that seeks to identify, locate, manipulate, format and present data in such a way as to optimally communicate meaning and proper knowledge.

Historically, the term data presentation architecture is attributed to Kelly Lautt:[24] "Data Presentation Architecture (DPA) is a rarely applied skill set critical for the success and value of Business Intelligence. Data presentation architecture weds the science of numbers, data and statistics in discovering valuable information from data and making it usable, relevant and actionable with the arts of data visualization, communications, organizational psychology and change management in order to provide business intelligence solutions with the data scope, delivery timing, format and visualizations that will most effectively support and drive operational, tactical and strategic behaviour toward understood business (or organizational) goals. DPA is neither an IT nor a business skill set but exists as a separate field of expertise. Often confused with data visualization, data presentation architecture is a much broader skill set that includes determining what data on what schedule and in what exact format is to be presented, not just the best way to present data that has already been chosen (which is data visualization). Data visualization skills are one element of DPA."

With the above objectives in mind, the actual work of data presentation architecture consists of:

DPA work shares commonalities with several other fields, including: