Bhūmi (Sanskrit: भूमि), or Bhūmī-Devī (Sanskrit: भूमी देवी), also known as Bhuma-Devi, Bhū-Devī, Pruthvi, Dharthi, Dhaathri, Dharani, Vasudha, Vasundhara, Vaishnavi, Kashyapi, Urvi, Vasumati and Hiranmaya, is the Hindu goddess representing Mother Earth. She is the consort of Varaha, an avatar of Vishnu, and she is regarded as the mother of the goddess Sita. According to the uttara-kanda, when Sita finally leaves her husband, Rama, she returns to Bhumi Devi. Bhumi Devi is also the mother of the demon Narakasura.[1] Bhudevi is the daughter of Kashyap Prajapati.

According to some stories, she is also considered to be Satyabhama, the wife of Sri Krishna in Dwapara Yuga as well as the divine Tamil poet-saint Andal. She gave birth to female deities including Sita. Alamelu Mangamma and Sri Padmavathi Devi of Tiruchanur, both considered daughters of Bhudevi, had a similar beginning to Sita, being found in a ploughed field by Akasa Raja. Andal was found in Srivilliputtur, Tamil Nadu, under a Tulasi plant by the Periyaalvar.. 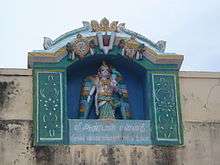 Bhudevi reincarnated in South India in Sriviliputhur as Andaal (Tamil: ஆண்டாள் Äṇɖāḷ) who is the only female Alvar among the 12 Alvar saints of South India. The Alvar saints are known for their affiliation to the Srivaishnava tradition of Hinduism. Born in the 10th Century CE, she is credited with many great Tamil works such as Thiruppavai and Nachiar Tirumozhi, which are still recited by devotees during the winter festival season of Margazhi. She is known for her unwavering devotion to Lord Vishnu, the God of the Srivaishnavas. She was adopted by the Alvar saint Periyalvar, who found her as a baby lying under a tulasi (Ocimum tenuiflorum) plant in the temple garden of Srivilliputhur. She is often referred to as "Kodhai" or "Goda". 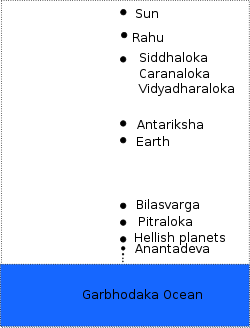 She is depicted in votive statuary, seated on a square platform which rests on the back of four elephants, representing the four directions of the world. When depicted with four arms, she holds a pomegranate, a water vessel, a bowl containing healing herbs and another containing vegetables.[2] When shown with two arms, she holds a blue lotus known as Kumuda or Utpala, the night lotus, in the right hand.[3] The left hand may be in the Abhaya Mudra - fearlessness or the Lolahasta Mudra which is an aesthetic pose meant to mimic the tail of a horse.[4]