This article is about biological tissue. For the moth, see Triphosa dubitata. For other uses, see Tissue. 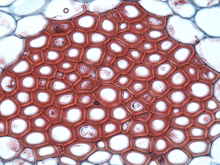 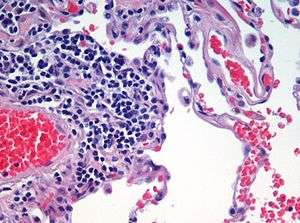 Microscopic view of a histologic specimen of human lung tissue stained with hematoxylin and eosin.

In biology, tissue is a cellular organizational level intermediate between cells and a complete organ. A tissue is an ensemble of similar cells from the same origin that together carry out a specific function. Organs are then formed by the functional grouping together of multiple tissues.

The study of tissue is known as histology or, in connection with disease, histopathology. The classical tools for studying tissues are the paraffin block in which tissue is embedded and then sectioned, the histological stain, and the optical microscope. In the last couple of decades, developments in electron microscopy, immunofluorescence, and the use of frozen tissue sections have enhanced the detail that can be observed in tissues. With these tools, the classical appearances of tissues can be examined in health and disease, enabling considerable refinement of medical diagnosis and prognosis. 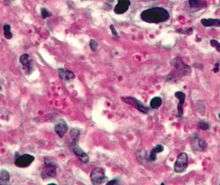 Animal tissues are grouped into four basic types: connective, muscle, nervous, and epithelial. Collections of tissues joined in structural units to serve a common function compose organs. While all animals can generally be considered to contain the four tissue types, the manifestation of these tissues can differ depending on the type of organism. For example, the origin of the cells comprising a particular tissue type may differ developmentally for different classifications of animals.

The epithelium in all birds and animals is derived from the ectoderm and endoderm with a small contribution from the mesoderm, forming the endothelium, a specialized type of epithelium that composes the vasculature. By contrast, a true epithelial tissue is present only in a single layer of cells held together via occluding junctions called tight junctions, to create a selectively permeable barrier. This tissue covers all organismal surfaces that come in contact with the external environment such as the skin, the airways, and the digestive tract. It serves functions of protection, secretion, and absorption, and is separated from other tissues below by a basal lamina.

Muscle cells form the active contractile tissue of the body known as muscle tissue or muscular tissue. Muscle tissue functions to produce force and cause motion, either locomotion or movement within internal organs. Muscle tissue is separated into three distinct categories: visceral or smooth muscle, found in the inner linings of organs; skeletal muscle, typically attached to bones and which generates gross movement; and cardiac muscle, found in the heart where it contracts to pump blood throughout an organism.

The epithelial tissues are formed by cells that cover the organ surfaces such as the surface of the skin, the airways, the reproductive tract, and the inner lining of the digestive tract. The cells comprising an epithelial layer are linked via semi-permeable, tight junctions; hence, this tissue provides a barrier between the external environment and the organ it covers. In addition to this protective function, epithelial tissue may also be specialized to function in secretion, excretion and absorption. Epithelial tissue helps to protect organs from microorganisms, injury, and fluid loss.

There are many kinds of epithelium, and nomenclature is somewhat variable. Most classification schemes combine a description of the cell-shape in the upper layer of the epithelium with a word denoting the number of layers: either simple (one layer of cells) or stratified (multiple layers of cells). However, other cellular features, such as cilia may also be described in the classification system. Some common kinds of epithelium are listed below: 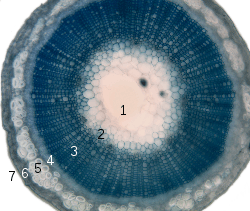 Plant tissues are categorized broadly into three tissue systems: the epidermis, the ground tissue, and the vascular tissue.

Plant tissues can also be divided differently into two types:

Meristematic tissue consists of actively dividing cells, and leads to increase in length and thickness of the plant. The primary growth of a plant occurs only in certain, specific regions, such as in the tips of stems or roots. It is in these regions that meristematic tissue is present. Cells in these tissues are roughly spherical or polyhedral, to rectangular in shape, and have thin cell walls. New cells produced by meristem are initially those of meristem itself, but as the new cells grow and mature, their characteristics slowly change and they become differentiated as components of the region of occurrence of meristimatic tissues, they are classified as:

The cells of meristematic tissues are similar in structure and have thin and elastic primary cell wall made up of cellulose. They are compactly arranged without inter-cellular spaces between them. Each cell contains a dense cytoplasm and a prominent nucleus. Dense protoplasm of meristematic cells contains very few vacuoles. Normally the meristematic cells are oval, polygonal or rectangular in shape.

Meristemetic tissue cells have a large nucleus with small or no vacuoles, they have no inter cellular spaces.

A group of cells which are similar in origin; similar in structure and similar in function are called simple permanent tissue. They are of four types:

Parenchyma (para - 'beside'; chyma - 'in filling, loose, unpacked') is the bulk of a substance. In plants, it consists of relatively unspecialised living cells with thin cell walls that are usually loosely packed so that intercellular spaces found between cells of this tissue. This tissue provides support to plants and also stores food. In some situations, a parenchyma contains chlorophyll and performs photosynthesis, in which case it is called a chlorenchyma. In aquatic plants, large air cavities are present in parenchyma to give support to them to float on water. Such a parenchyma type is called aerenchyma. shape:Each individual parenchymatous cell may be isodiametric,spherical,oval,cylindrical,rectangular,stellate or long spindle like structure. 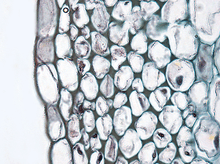 Collenchyma is Greek word where "Collen" means gum and "chyma" means infusion. It is a living tissue of primary body like Parenchyma. Cells are thin-walled but possess thickening of cellulose, water and pectin substances (pectocellulose) at the corners where number of cells join together. This tissue gives a tensile strength to the plant and the cells are compactly arranged and have very little inter-cellular spaces. It occurs chiefly in hypodermis of stems and leaves. It is absent in monocots and in roots.

Collenchymatous tissue acts as a supporting tissue in stems of young plants. It provides mechanical support, elasticity, and tensile strength to the plant body. It helps in manufacturing sugar and storing it as starch. It is present in the margin of leaves and resist tearing effect of the wind.

Sclerenchyma is Greek word where "Sclrenes" means hard and chyma" means infusion. This tissue consists of thick-walled, dead cells. These cells have hard and extremely thick secondary walls due to uniform distribution of lignin. Lignin deposition is so thick that the cell walls become strong, rigid and impermeable to water.

The epidermis is the outer (epi in Greek meaning "over" or "upon") of the two layers that make up the skin (or cutis), the inner layer being the dermis.[1] It provides a barrier to infection from environmental pathogens[2] and regulates the amount of water released from the body into the atmosphere through transepidermal water loss (TEWL).[3] The outermost part of the epidermis is composed of a stratified layer of flattened cells,[4] that overly a basal layer (stratum basale) composed of columnar cells arranged perpendicularly.

The complex tissue consists of more than one type of cells which work together as a unit. Complex tissues help in the transportation of organic material, water and minerals up and down the plants. That is why it is also known as conducting and vascular tissue. The common types of complex permanent tissue are:

Xylem serves as a chief conducting tissue of vascular plants. It is responsible for the conduction of water and mineral ions/salt. 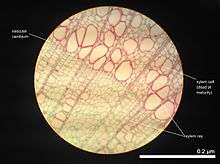 Xylem tissue is organized in a tube-like fashion along the main axes of stems and roots. It consists of a combination of parenchyma cells, fibers, vessels, tracheids, and ray cells. Longer tubes made up of individual cells are vessels (tracheae), while vessel members are open at each end. Internally, there may be bars of wall material extending across the open space. These cells are joined end to end to form long tubes. Vessel members and tracheids are dead at maturity. Tracheids have thick secondary cell walls and are tapered at the ends. They do not have end openings such as the vessels. The tracheids ends overlap with each other, with pairs of pits present. The pit pairs allow water to pass from cell to cell.

Though most conduction in xylem tissue is vertical, lateral conduction along the diameter of a stem is facilitated via rays. [1] Rays are horizontal rows of long-living parenchyma cells that arise out of the vascular cambium. In trees and other woody plants, rays radiate out from the center of stems and roots, and appear like spokes on a wheel in cross section. Rays, unlike vessel members and tracheids, are alive at functional maturity. [2]

Phloem is an equally important plant tissue as it also is part of the 'plumbing system' of a plant. Primarily, phloem carries dissolved food substances throughout the plant. This conduction system is composed of sieve-tube member and companion cells, that are without secondary walls. The parent cells of the vascular cambium produce both xylem and phloem. This usually also includes fibers, parenchyma and ray cells. Sieve tubes are formed from sieve-tube members laid end to end. The end walls, unlike vessel members in xylem, do not have openings. The end walls, however, are full of small pores where cytoplasm extends from cell to cell. These porous connections are called sieve plates. In spite of the fact that their cytoplasm is actively involved in the conduction of food materials, sieve-tube members do not have nuclei at maturity. It is the companion cells that are nestled between sieve-tube members that function in some manner bringing about the conduction of food. Sieve-tube members that are alive contain a polymer called callose, a carbohydrate polymer, forming the callus pad/callus, the colourless substance that covers the sieve plate. Callose stays in solution as long as the cell contents are under pressure. Phloem transports food and materials in plants upwards and downwards as required.