For other uses, see Biosphere (disambiguation). 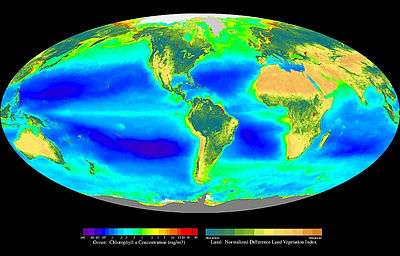 A false-color composite of global oceanic and terrestrial photoautotroph abundance, from September 1997 to August 2016. Provided by the SeaWiFS Project, NASA/Goddard Space Flight Center and ORBIMAGE.

The biosphere is the global sum of all ecosystems. The two joined words are "bio" and "sphere". It can also be termed as the zone of life on Earth, a closed system (apart from solar and cosmic radiation and heat from the interior of the Earth), and largely self-regulating.[1] By the most general biophysiological definition, the biosphere is the global ecological system integrating all living beings and their relationships, including their interaction with the elements of the lithosphere, geosphere, hydrosphere, and atmosphere. The biosphere is postulated to have evolved, beginning with a process of biopoesis (life created naturally from non-living matter, such as simple organic compounds) or biogenesis (life created from living matter), at least some 3.5 billion years ago.[2][3] The earliest evidence for life on Earth includes biogenic graphite found in 3.7 billion-year-old metasedimentary rocks from Western Greenland[4] and microbial mat fossils found in 3.48 billion-year-old sandstone from Western Australia.[5][6] More recently, in 2015, "remains of biotic life" were found in 4.1 billion-year-old rocks in Western Australia.[7][8] According to one of the researchers, "If life arose relatively quickly on Earth ... then it could be common in the universe."[7]

In a general sense, biospheres are any closed, self-regulating systems containing ecosystems. This includes artificial biospheres such as Biosphere 2 and BIOS-3, and potentially ones on other planets or moons.[9]

Origin and use of the term 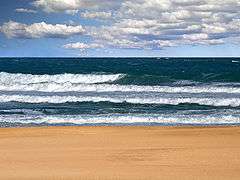 The term "biosphere" was coined by geologist Eduard Suess in 1875, which he defined as the place on Earth's surface where life dwells.[10]

While the concept has a geological origin, it is an indication of the effect of both Charles Darwin and Matthew F. Maury on the Earth sciences. The biosphere's ecological context comes from the 1920s (see Vladimir I. Vernadsky), preceding the 1935 introduction of the term "ecosystem" by Sir Arthur Tansley (see ecology history). Vernadsky defined ecology as the science of the biosphere. It is an interdisciplinary concept for integrating astronomy, geophysics, meteorology, biogeography, evolution, geology, geochemistry, hydrology and, generally speaking, all life and Earth sciences.

Geochemists define the biosphere as being the total sum of living organisms (the "biomass" or "biota" as referred to by biologists and ecologists). In this sense, the biosphere is but one of four separate components of the geochemical model, the other three being geosphere, hydrosphere, and atmosphere. When these four component spheres are combined into one system, it is known as the Ecosphere. This term was coined during the 1960s and encompasses both biological and physical components of the planet.[11]

The Second International Conference on Closed Life Systems defined biospherics as the science and technology of analogs and models of Earth's biosphere; i.e., artificial Earth-like biospheres.[12] Others may include the creation of artificial non-Earth biospheres—for example, human-centered biospheres or a native Martian biosphere—as part of the topic of biospherics. 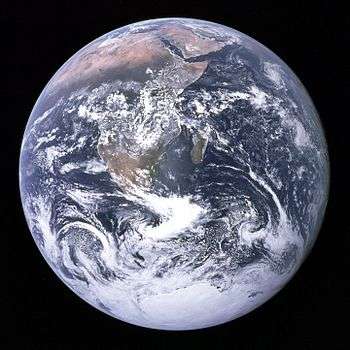 Water covers 71% of the Earth's surface. Image is the Blue Marble photographed from Apollo 17.

Every part of the planet, from the polar ice caps to the equator, features life of some kind. Recent advances in microbiology have demonstrated that microbes live deep beneath the Earth's terrestrial surface, and that the total mass of microbial life in so-called "uninhabitable zones" may, in biomass, exceed all animal and plant life on the surface. The actual thickness of the biosphere on earth is difficult to measure. Birds typically fly at altitudes as high as 1,800 m (5,900 ft; 1.1 mi) and fish live as much as 8,372 m (27,467 ft; 5.202 mi) underwater in the Puerto Rico Trench.[2]

Microscopic organisms live in every part of the biosphere, including soil, hot springs, "seven miles deep" in the ocean, "40 miles high" in the atmosphere and inside rocks far down within the Earth's crust (see also endolith).[13] Microorganisms, under certain test conditions, have been observed to thrive in the vacuum of outer space.[14][15] The total amount of soil and subsurface bacterial carbon is estimated as 5 x 1017 g, or the "weight of the United Kingdom".[13] The mass of prokaryote microorganisms — which includes bacteria and archaea, but not the nucleated eukaryote microorganisms — may be as much as 0.8 trillion tons of carbon (of the total biosphere mass, estimated at between 1 and 4 trillion tons).[16] Barophilic marine microbes have been found at more than a depth of 10,000 m (33,000 ft; 6.2 mi) in the Mariana Trench, the deepest spot in the Earth's oceans.[17] In fact, single-celled life forms have been found in the deepest part of the Mariana Trench, by the Challenger Deep, at depths of 11,034 m (36,201 ft; 6.856 mi).[18][19][20] Other researchers reported related studies that microorganisms thrive inside rocks up to 580 m (1,900 ft; 0.36 mi) below the sea floor under 2,590 m (8,500 ft; 1.61 mi) of ocean off the coast of the northwestern United States,[19][21] as well as 2,400 m (7,900 ft; 1.5 mi) beneath the seabed off Japan.[22] Culturable thermophilic microbes have been extracted from cores drilled more than 5,000 m (16,000 ft; 3.1 mi) into the Earth's crust in Sweden,[23] from rocks between 65–75 °C (149–167 °F). Temperature increases with increasing depth into the Earth's crust. The rate at which the temperature increases depends on many factors, including type of crust (continental vs. oceanic), rock type, geographic location, etc. The greatest known temperature at which microbial life can exist is 122 °C (252 °F) (Methanopyrus kandleri Strain 116), and it is likely that the limit of life in the "deep biosphere" is defined by temperature rather than absolute depth. On 20 August 2014, scientists confirmed the existence of microorganisms living 800 m (2,600 ft; 0.50 mi) below the ice of Antarctica.[24][25] According to one researcher, "You can find microbes everywhere — they're extremely adaptable to conditions, and survive wherever they are."[19]

Our biosphere is divided into a number of biomes, inhabited by fairly similar flora and fauna. On land, biomes are separated primarily by latitude. Terrestrial biomes lying within the Arctic and Antarctic Circles are relatively barren of plant and animal life, while most of the more populous biomes lie near the equator.

For this list, if a word is followed by a number, it is usually referring to a specific system or number. Thus:

No biospheres have been detected beyond the Earth; therefore, the existence of extraterrestrial biospheres remains hypothetical. The rare Earth hypothesis suggests they should be very rare, save ones composed of microbial life only.[28] On the other hand, Earth analogs may be quite numerous, at least in the Milky Way galaxy.[29] Given limited understanding of abiogenesis, it is currently unknown what percentage of these planets actually develop biospheres.

It is also possible that artificial biospheres will be created during the future, for example on Mars.[30] The process of creating an uncontained system that mimics the function of Earth's biosphere is called terraforming.[31]