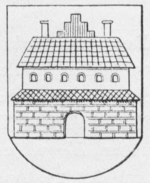 Børglum Abbey, featured on the coat of arms of the former Børglum Herred

The ancient bishopric of Børglum, sometimes also known as the bishopric of Vendsyssel, seated latterly at Børglum in Denmark, comprised the ancient districts of Vendsyssel and Thy, which between them included the whole of the north of the Jutland peninsula beyond the Limfjord.[1]

The see was first established at Vestervig, when the diocese was formed in 1059 out of the Diocese of Viborg which had previously included the whole of Jutland, on the death of Bishop Val. Magnus, first Bishop of Vestervig, was drowned in the Elbe in about 1060, while returning home after his consecration by Adalbert I, Archbishop of Hamburg. Albrik, Dean of Bremen, was the second bishop (1066–85). It was originally a suffragan of the archdiocese of Hamburg-Bremen until 1104, when the Diocese of Lund was elevated to an archdiocese and became Børglum's metropolitan see.

Vestervig was the residence of Saint Thøger, a missionary from Thuringia in eastern Germany, and chaplain to the Norwegian king Saint Olaf. After Olaf's death in 1030 Thøger withdrew to Vestervig, where he built a little church of thatch and wattle, and preached Christianity to the local people. He died on 24 June 1067, and was canonised in spite of the opposition of King Svend Estridsen and Bishop Albrik. Eventually Saint Thøger became the patron saint of the diocese. Albrik's successor, Bishop Henry, was chaplain to King Canute IV, later Saint Canute, and accompanied him during his stay in Vendsyssel in June 1086.

Bishop Sylvester (1134–36) transferred the see to the royal estate at Børglum. At about the same time a monastic foundation was settled here, the later Børglum Abbey, although there is little information about its exact nature.[2] In about 1180 the Premonstratensian canons of Steinfeld Abbey in Germany settled here. In about 1220 the Bishop of Børglum made the abbey his seat; the abbey church became the cathedral of the diocese, and its canons formed the diocesan chapter with power to elect the bishop.

The last two bishops were Niels Stygge (Rosenkrantz) and his nephew, Stygge Krumpen. Niels Stygge (b. 1455) was Bishop of Børglum from 1486-1533. Stygge Krumpen became coadjutor bishop in 1519, and diocesan bishop in 1533. He made some efforts to stay the progress of Protestantism, but was imprisoned from 1536, when the Reformation was formally introduced into Denmark, to 1542. He was then endowed with the property of the nunnery of Asmild near Viborg, though obliged to maintain the nuns, and died there in 1551.

In the territory of the former diocese of Børglum there are notable churches at Vestervig and Børglum, the former dating from the beginning of the twelfth century, and both of them previously cathedrals.

A relatively unknown fairy tale by Hans Christian Andersen is titled "The Bishop of Børglum and his Warriors".[3]