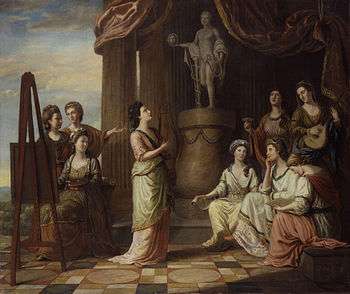 Portraits in the Characters of the Muses in the Temple of Apollo by Richard Samuel include Elizabeth Carter, Angelica Kauffman, Anna Laetitia Barbauld, Catharine Macaulay, Elizabeth Montagu, Elizabeth Griffith, Hannah More, Elizabeth Ann Sheridan and Charlotte Lennox.[1] Use a cursor to see who is who.

The Blue Stockings Society was an informal women's social and educational movement in England in the mid-18th century. The society emphasized education and mutual co-operation.

The Society was founded in the early 1750s by Elizabeth Montagu, Elizabeth Vesey and others as a women's literary discussion group, a revolutionary step away from traditional, non-intellectual, women's activities. They invited various people (both women and men) to attend, including botanist, translator and publisher Benjamin Stillingfleet. One story tells that Stillingfleet was not rich enough to have the proper formal dress, which included black silk stockings, so he attended in everyday blue worsted stockings. The term came to refer to the informal quality of the gatherings and the emphasis on conversation over fashion.[1] 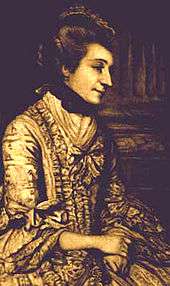 The Blue Stockings Society of England emerged in about 1750, and waned in popularity at the end of the 18th century. It was a loose organization of privileged women with an interest in education to gather together to discuss literature while inviting educated men to participate. The Blue Stockings Society leaders and hostesses were Elizabeth Montagu and Elizabeth Vesey. The women involved in this group generally had more education and fewer children than most English women of the time. During this time period only men attended universities and women were expected to master skills such as needlework and knitting: It was considered “unbecoming” for them to know Greek or Latin, almost immodest for them to be authors, and certainly indiscreet to own the fact. Mrs. Barbauld was merely the echo of popular sentiment when she protested that women did not want colleges. “The best way for a woman to acquire knowledge”, she wrote, “is from conversation with a father, or brother, or friend.” By the early 1800s, this sentiment had changed, and it was much more common to question "why a woman of forty should be more ignorant than a boy of twelve",[2] which coincided with the waning of the Blue Stockings's popularity.

The group has been described by many historians and authors such as Jeanine Dobbs[3] as "having preserved and advanced feminism" due to the advocacy of women's education, social complaints of the status and lifestyle expected of the women in their society, seen in the writings of the Blue Stocking women themselves:

In a woman's education little but outward accomplishments is regarded ... sure the men are very imprudent to endeavor to make fools of those to whom they so much trust their honour and fortune, but it is in the nature of mankind to hazard their peace to secure power, and they know fools make the best slaves.
— Elizabeth Montagu[1] 1743

The name "Blue Stocking Society" and its origins are highly disputed among historians.[4] There are scattered early references to bluestockings including in the 15th-century Della Calza society in Venice, John Amos Comenius in 1638, and the 17th century Covenanters in Scotland. The society's name perhaps derived from the European fashion in the mid-18th century in which black stockings were worn in formal dress and blue stockings were daytime or more informal wear. Blue stockings were also very fashionable for women in Paris at the time, though many historians claim the term for the society began when Mrs. Vesey first said to Benjamin Stillingfleet, the aforementioned learned gentleman who had given up society and did not have clothes suitable for an evening party, to "Come in your blue stockings". Mr. Stillingfleet became a popular guest at the Blue Stocking Society gatherings.[5]

The Blue Stocking society had no membership formalities or fees but was conducted as small to large gatherings in which talk of politics was prohibited but literature and the arts were of main discussion. Learned women with interest in these educational discussions attended as well as invited male guests. Tea, biscuits and other light refreshments would be served to guests by the hostesses.

The New York Times archives contain an article published on 17 April 1881 which describes the Blue Stockings Society as a women's movement away from the "vice" and "passion" of gambling which was the main form of entertainment at higher society parties. "Instead however, of following the fashion, Mrs. Montagu and a few friends Mrs. Boscawen and Mrs. Vesey, who like herself, were untainted by this wolfish passion, resolved to make a stand against the universal tyranny of a custom which absorbed the life and leisure of the rich to the exclusion of all intellectual enjoyment... and to found a society in which conversation should supersede cards." (1881, The New York Times).

Many of the Blue Stocking women supported each other in intellectual endeavors such as reading, artwork, and writing. Many also published literature. Author Elizabeth Carter (1717–1806) was a Blue Stocking Society advocate and member who published essays and poetry, and translated Epictetus. Contemporary author Anna Miegon compiled biographical sketches of these women in her Biographical Sketches of Principal Bluestocking Women.[6]